I really should have waited before posting on the Perry's French wagon because I just finished my Perry's Austrian Hussars.  They are quite a nice figure and well animated, with a choice of sword arms to vary the action a bit.  If I have one criticism its that the horse's fetlocks and bases are way too thin and can bend or even break getting them off the painting stick I hot-glue them to.  I've used the hot-glue gun method for years and its mostly the new Perry's that have caused me grief - although I did also have problems for the same reason with my WWII RifRaf Greeks.  Its a production problem I've heard of from quite a few others so I know I'm not alone. Some of my wargaming colleagues refuse to buy any more Perry's, particularly cavalry, because of this problem.  Its a pity because they are, like most other Perry stuff, beautiful figures. I've not encountered the problem with their plastic cav figures either. 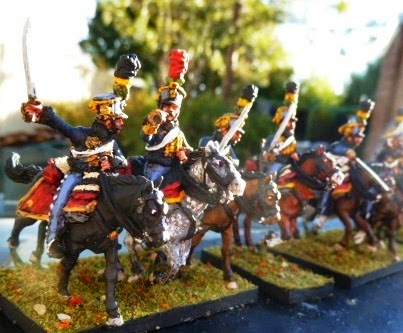 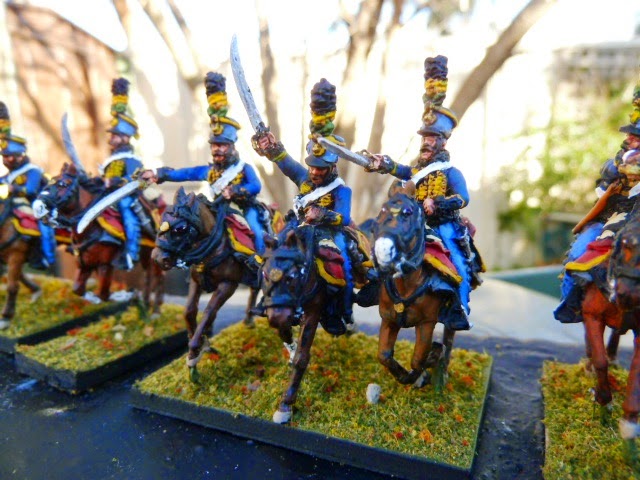 Every man and his dog when doing Austrian hussars seems to pick the more riotously coloured ones like #4 'Hessen-Homberg' with their bright blue shakos and parrot green pelisses but I decided on the more quality and somberly coloured Regt. #3 'Erzherzog (Crown Prince) Ferdinand Carl d'Este' - still colourful enough in my opinion! 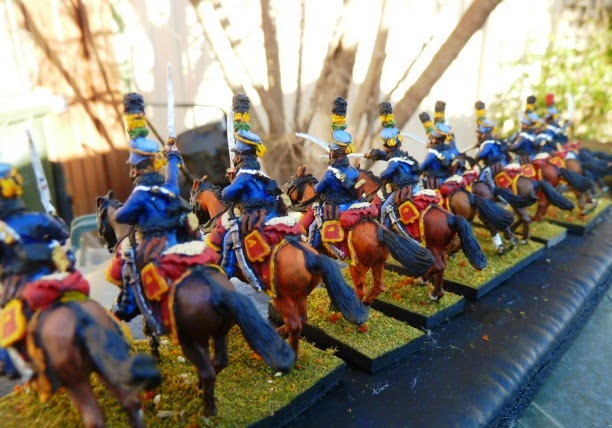 Gradually re-building my Austrian army after selling off most of my old figures. Big job! But its good to take a break from WWII stuff for a bit and paint some Naps - always my first love when I started collecting! 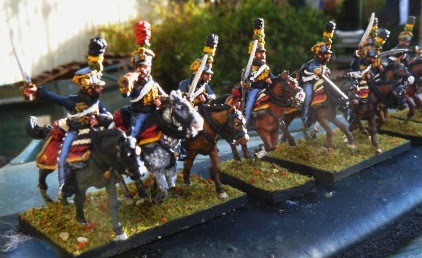 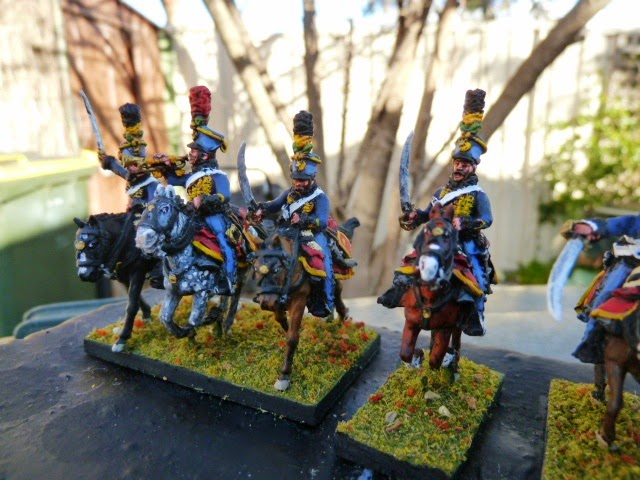 They'll fit in nicely with the hordes of other Perrys I've bought.  Still got artillery limbers and several battalions of infantry (@ 48 figures each!) to paint up before I start the Russians. I haven't entirely abandoned WWII either as I have a Fairy Swordfish bomber to build - the old Airfix kit which should be a challenge - and an Italian army to put together.  I still want to have another go at Galatas Part 2 again.  Plenty of other ambitious projects in the wind too - Austrian 1859 army, WW1 Belgians & Germans, Italian Wars Landesknechts & Pike and finishing my TYW dragoons etc, ACW - it never ends really.

Lotsa of lead to paint - so little time to paint it! Still, more time now the AFL footy season draws to a close, my son's team out of their finals (no more goal umpiring duties for me) and my beloved Saints seemed destined for yet another wooden spoon. [sigh]
Think I might paint some more figures...
Posted by Doc Smith at 9:56 PM