Not dead yet... another WWII aircraft and some Napoleonics finished

Rumours of my demise are.... rumours!  No activity on my blog is NOT a sign of my passing but is a sign of:

b) work (boring work of the post 'retirement' variety)

In fact I have been busy-ish with the hobby in my spare time (once more becoming a rare and precious commodity!) painting loads of figures, building model aircraft (I seem to have been bitten by that bug again) and various other projects. The only thing I haven't done recently and which I do miss is have a decent game.  When I do manage one I usually post the results on the blog.  The fact there has been nothing - nada - zip for two months  gives you an indication of the parlous state of affairs my wargaming has fallen into lately.

That said, what I've lost in wargaming I have somewhat made up in other hobby-related activities, mainly finishing off my new Austrian Napoleonic army and building WWII aircraft to finish my Greece/Crete/Mediterranean Theatre project.  My eldest bought me a few models I'd been after for Father's Day (well done lad) and I have recently completed the Gloster Gladiator biplane.  It's Airfix' new kit and what a beauty it is. The only drawback is the decals for the Irish air force or pre-war options which forced me to source stuff for the Greek theatre. Here I discovered one belonging to Gladiator ace Sqdn Leader M StJ Pattle, tragically killed over Athens in 1941 flying a Hurricane against ME110's. Turns out he was probably the highest scoring Allied ace in the war - at least in the West, and certainly among the Commonwealth pilots (he was South African born but joined the RAF before the war) with 51 confirmed kills, although private records from squadron members suggest the real figure was over 60. Remarkably that's all between early 1940 and April 1941 when he was finally and fatally shot down. He was a master of deflection shooting which meant that unless there was another witness, the gun cameras didn't catch the shoot down, as the burst was put into the space the enemy plane flew into - a pretty rare trick very few mastered - so it often looked like he was firing into thin air! 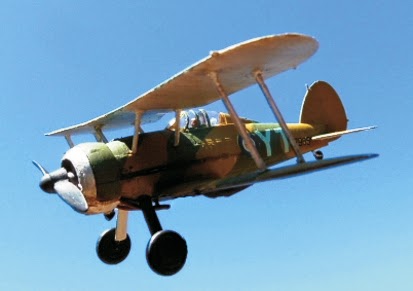 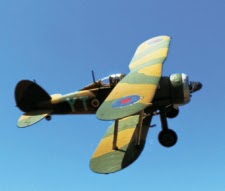 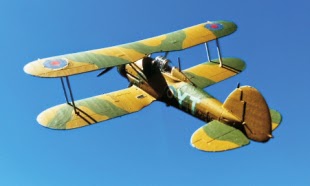 A remarkable record for Pattle, even scoring a few ME109s in his Gladiator before swapping over to Hurricanes in about February or March 1941. He was also one of the very rare 'ace-in-a-day' pilots - shooting down more than six enemy planes in two or three sorties on the same day.

As you can see, I had to have a Gladiator in his colours!  Pedants would notice there's a missing letter on the side of the plane.  One of the things I have been unable to master thus far in model-building are the #$%@ing water-slide decals - particularly the old ones that disintegrate when you try to put 'em on! Hence the missing third letter!  Other than that its as accurate as I can get it of a Gladiator from the same squadron in Greece in 1940-41. That Gloster nearly completes the Allied air force - just a Fairy Swordfish bomber (another biplane - should be a fun challenge!) and a Kittyhawk to go. To finish the Axis air force I have found (again thanks to the help of my eldest boy) a rare kit of an Italian S.79 Sparviero trimotor bomber. I may also do a JU88 or a Dornier if the madness doesn't subside but there are literally thousands of figures awaiting my attention too. Which brings me to my next piece: Cossack artillery! 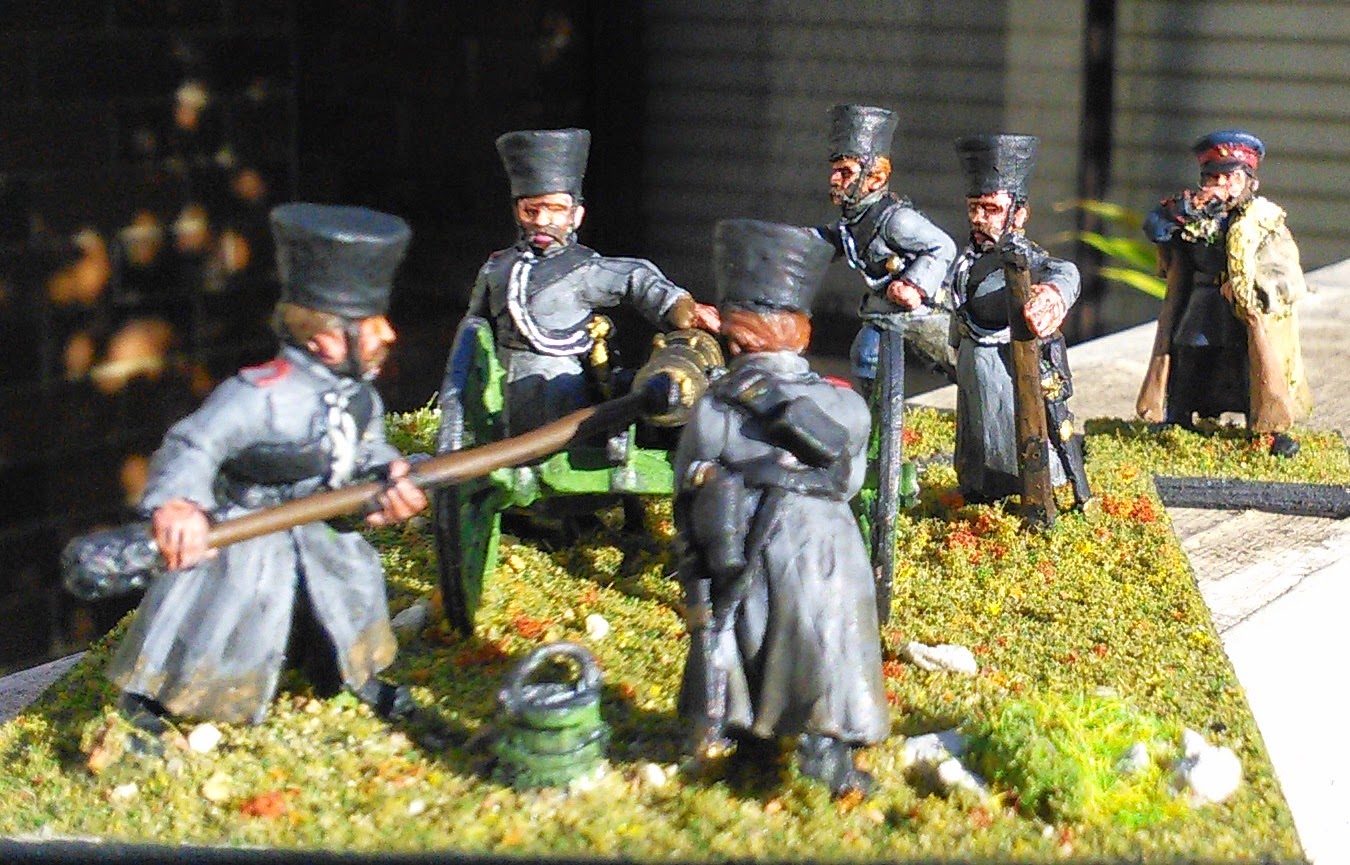 I picked this old Foundry set up from a bring-&-buy last year for a few dollars. It is of Crimea vintage Cossacks BUT the uniform is virtually unchanged from 1812, particularly under greatcoats!  The tall cylindrical peakless hats also match the earlier era - have a look at Perry's new Opolchenie artillery set and you'll see what I mean. It's to finish off my Cossack brigade and goes well with the other figures (painting up my Perrys cossacks now in fact). Its a great little set - I even like the shouting officer  and the superfluous running Cossack crewman ("Hurry Pavel - run & fetch vodka for Kapitan!") 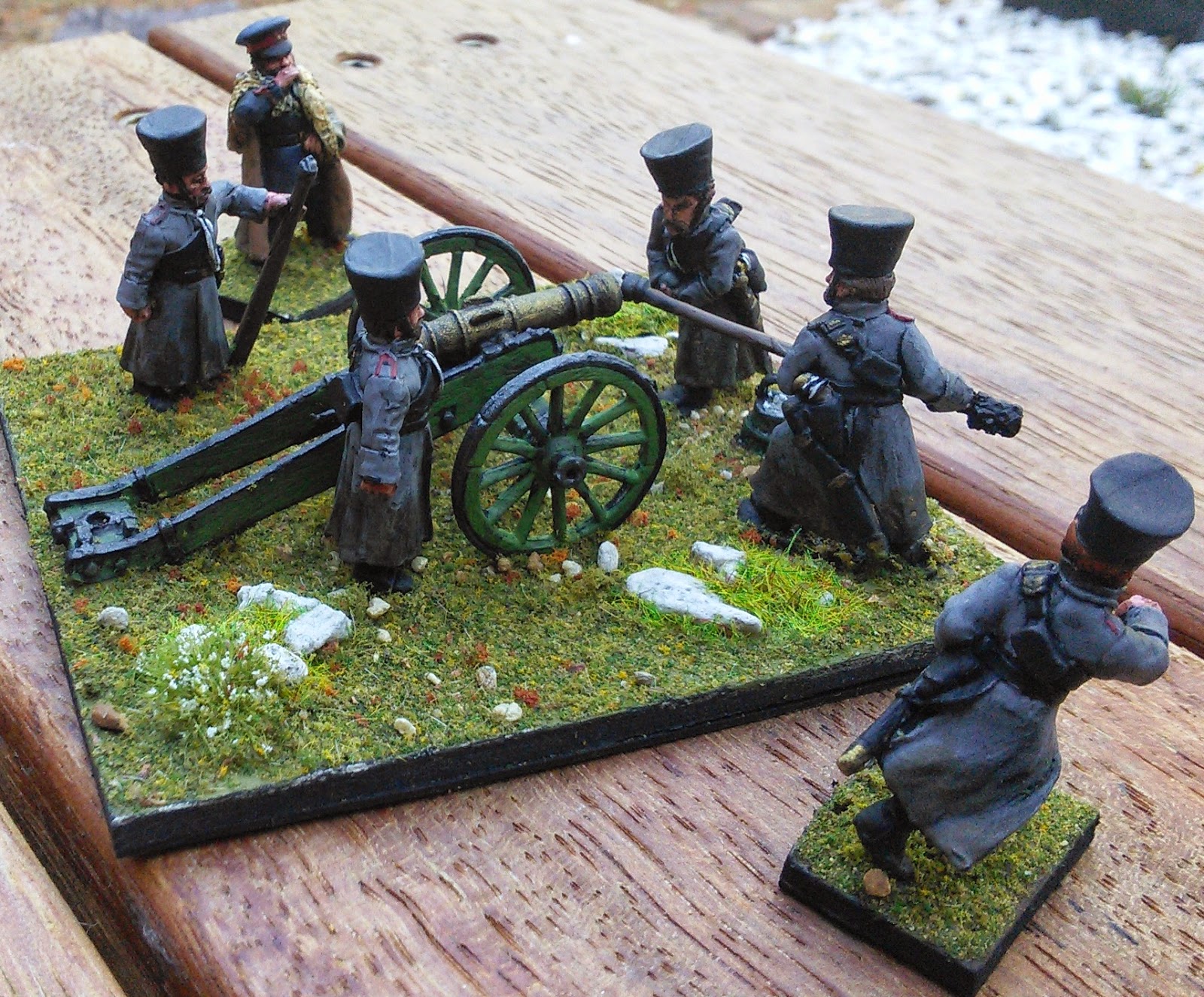 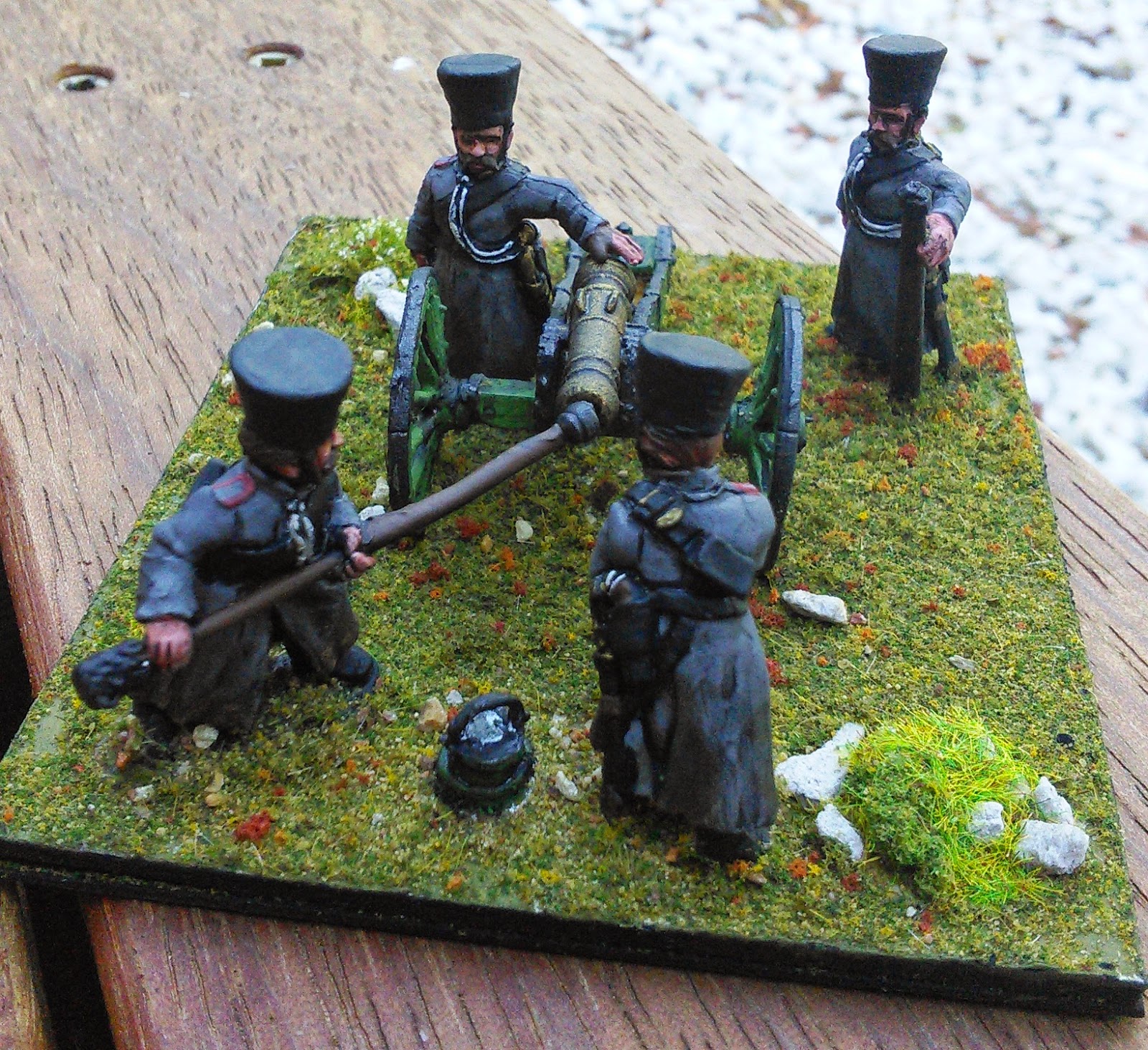 Last but not least are my Perrys Hungarians - a 36-figure battalion of them. They are a lovely figure and nicely animated - should have got more of course but they are bloody expensive to import from the UK even with the boy's discount (but thanks guys!)  Still, cheaper than buying 'em here!

Ya see folks, Tony Abbott's Australia is a bloody expensive place to live (apparently it's cheaper to live in Switzerland) and my town Canberra - one of the most costly places to live in it. EVERYTHING costs a fortune - so I shouldn't whinge about my expensive little indulgence of a hobby! 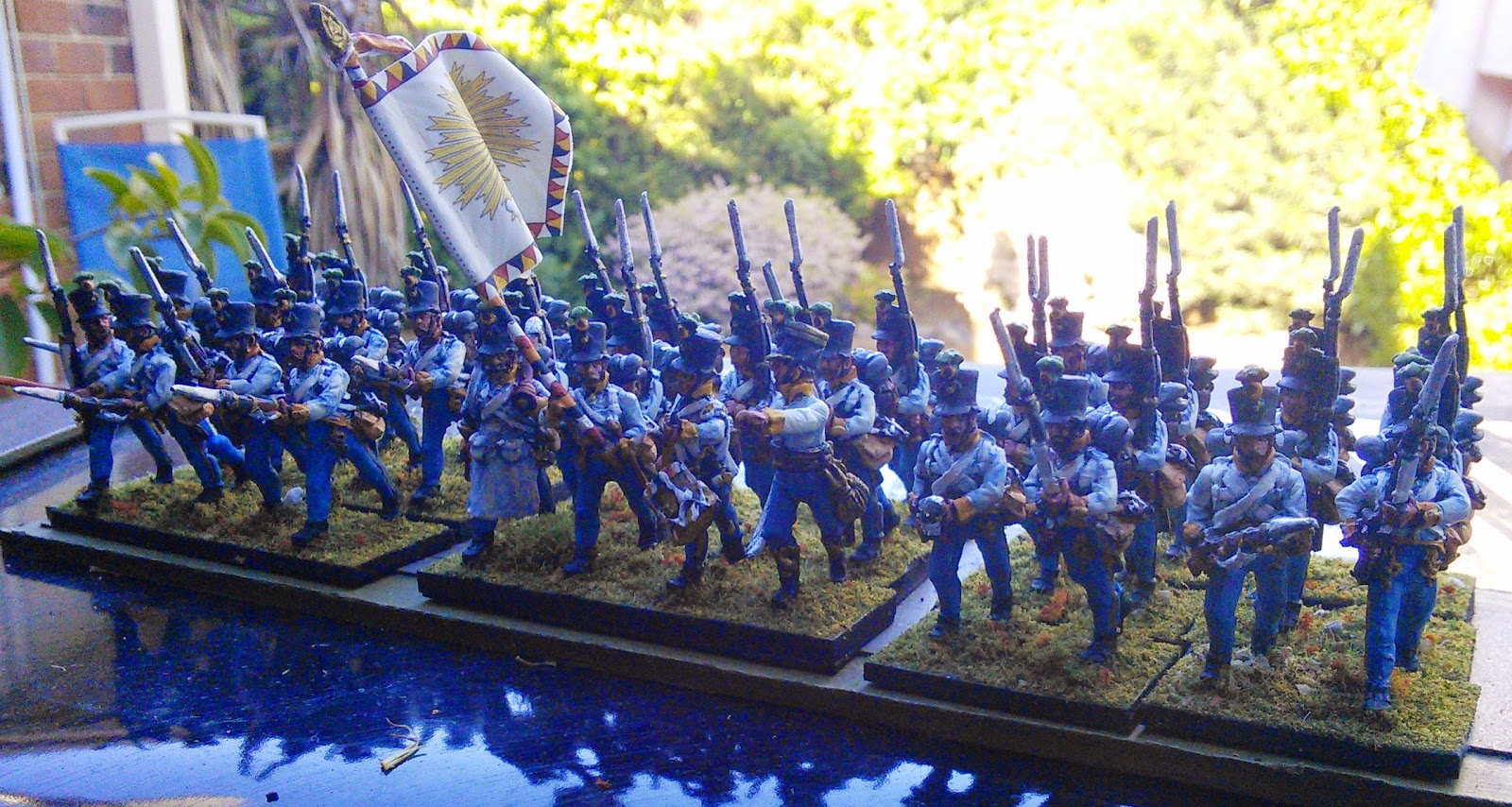 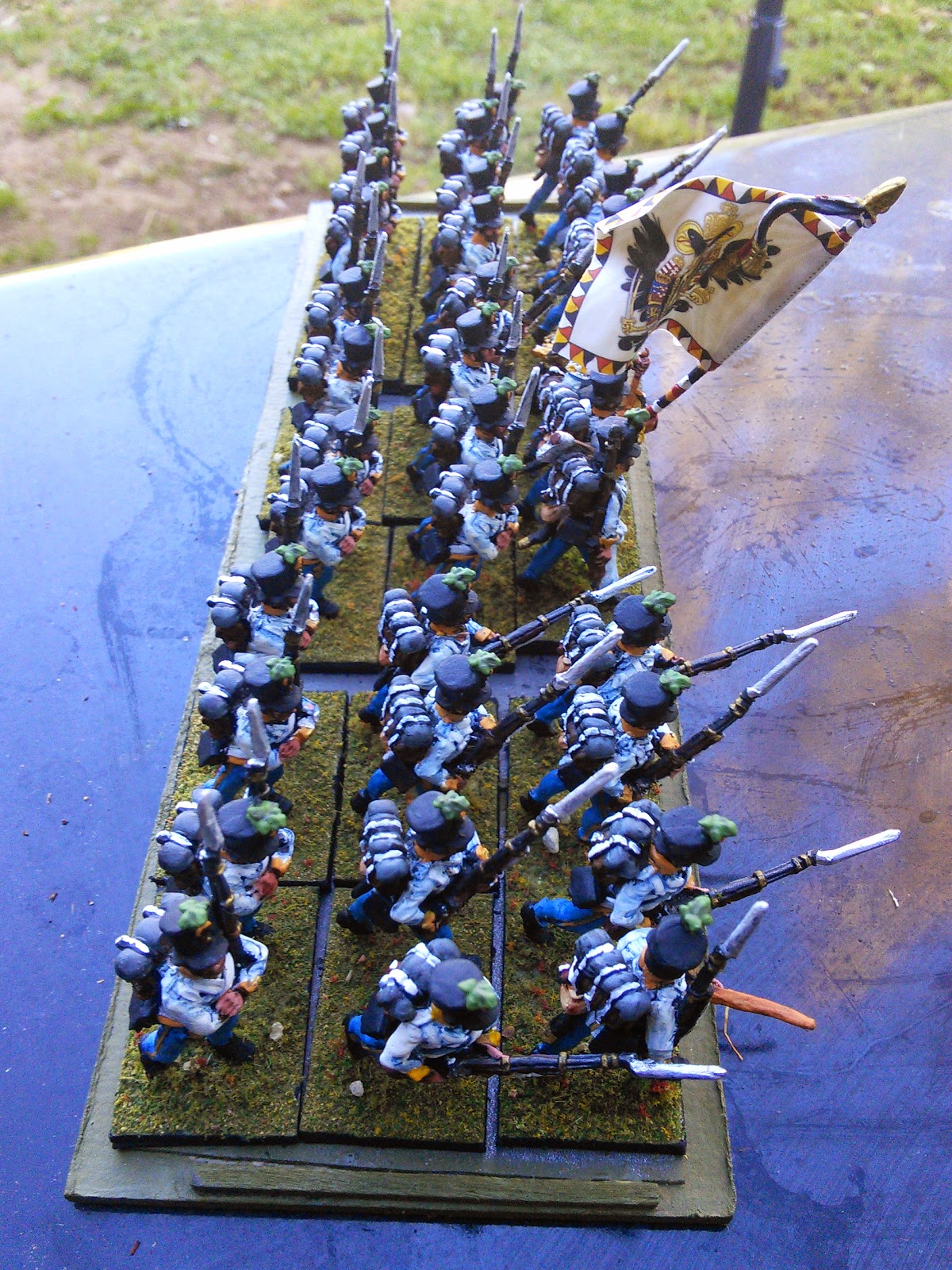 Apologies folks, us 'semi-retired' get a bit antsy about the price of things here or as the sign that I got my dad when he retired said: 'Knows everything - now has the time to tell you about it!'  So, stressed pensioner or retiree know-it-all just gobbing off - take your pick! 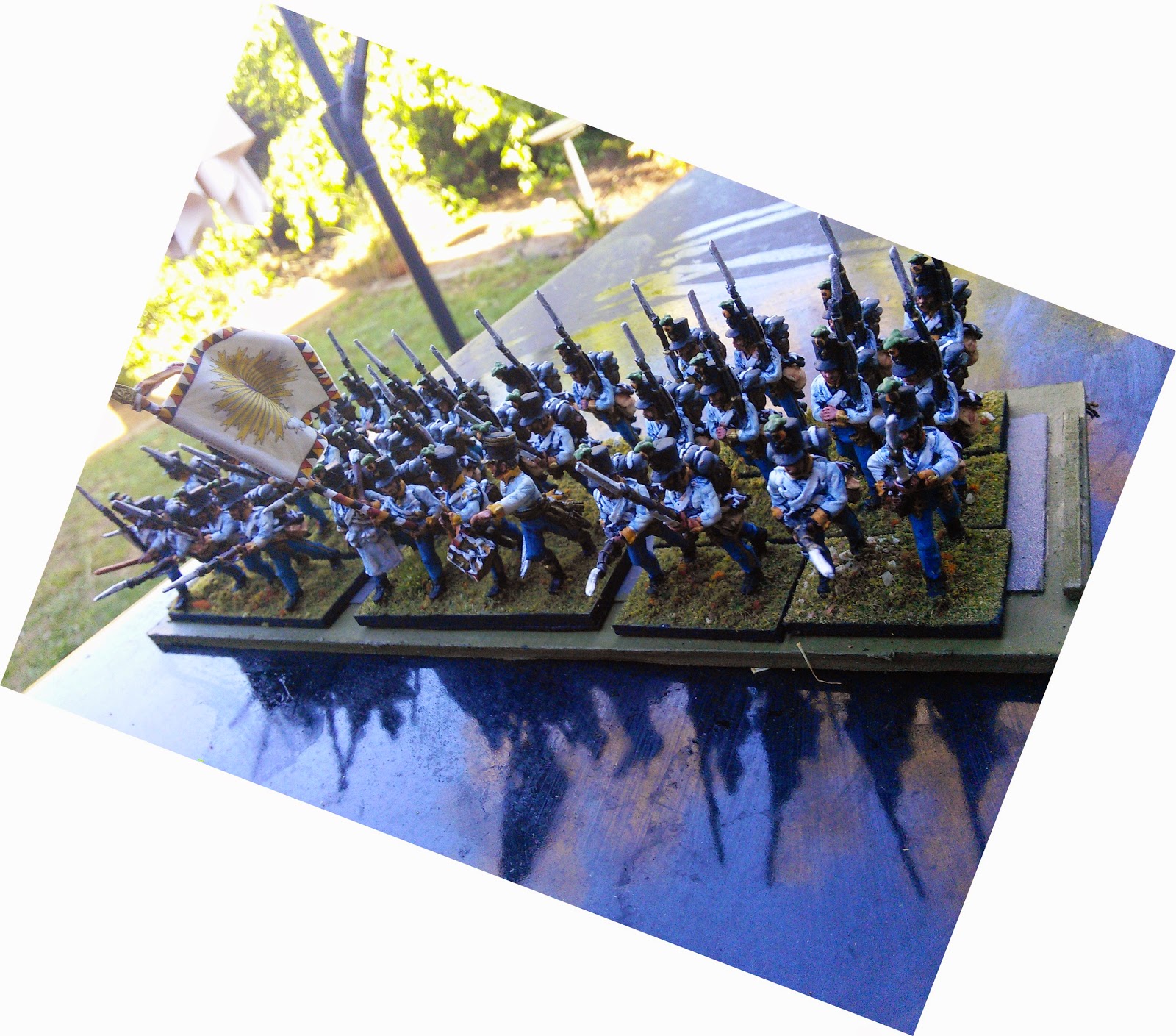 Anyway, the Austrian Holy Roman Empire's Hungarian infantry.  It may have been neither holy nor Roman but their sky-blue pantalooned Hungarian infantry were the pride of the Empire!  They look the business too. 'The duck's guts' as my boy would say. I am concerned about the old WRG-sized basing which has become increasingly crowded with the 'scale creep' of modern figures BUT given I've done the lot that way, re-basing hundreds or even thousands of figures will not be happening any time soon! Besides, they still fit - just. 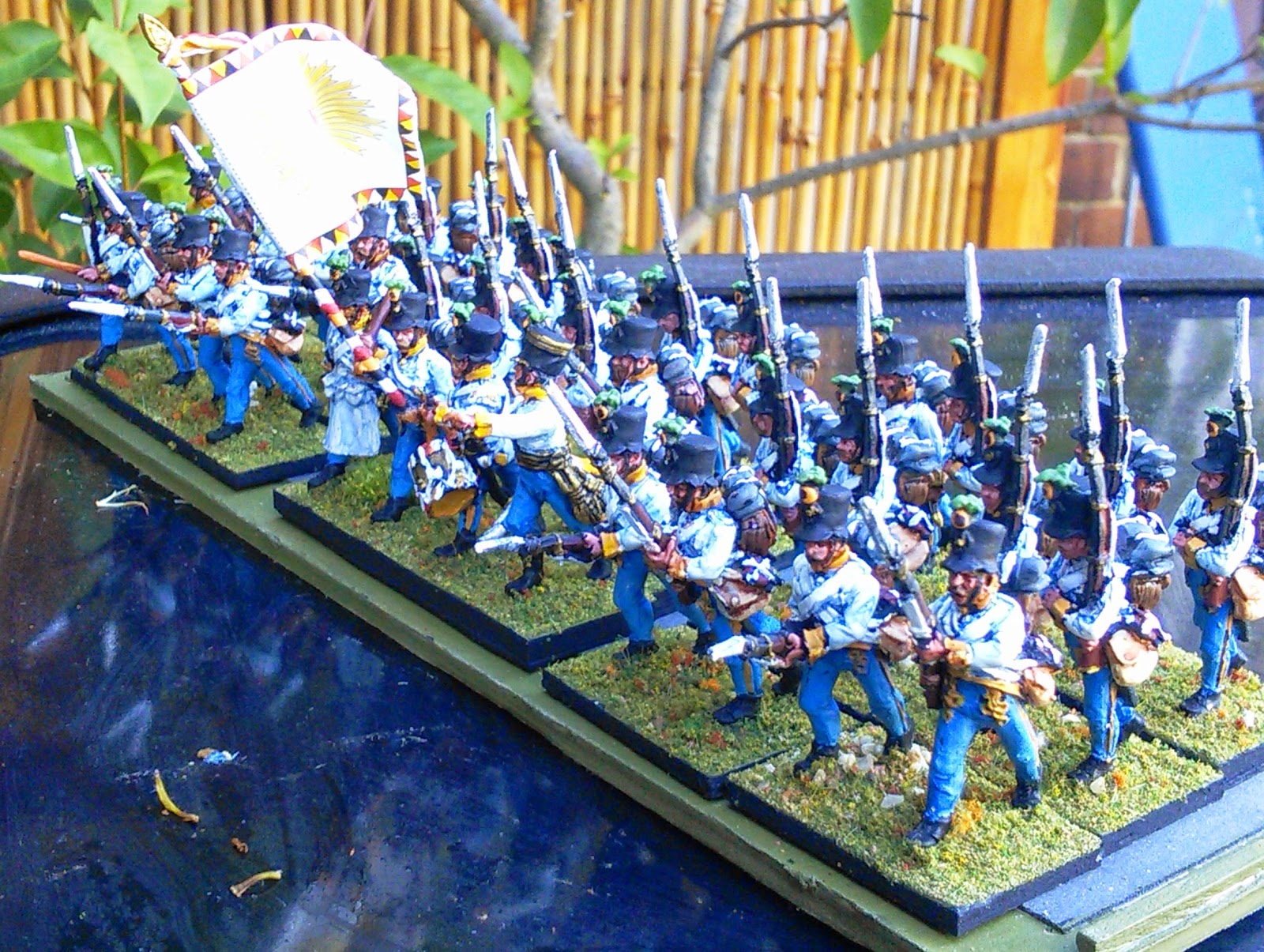 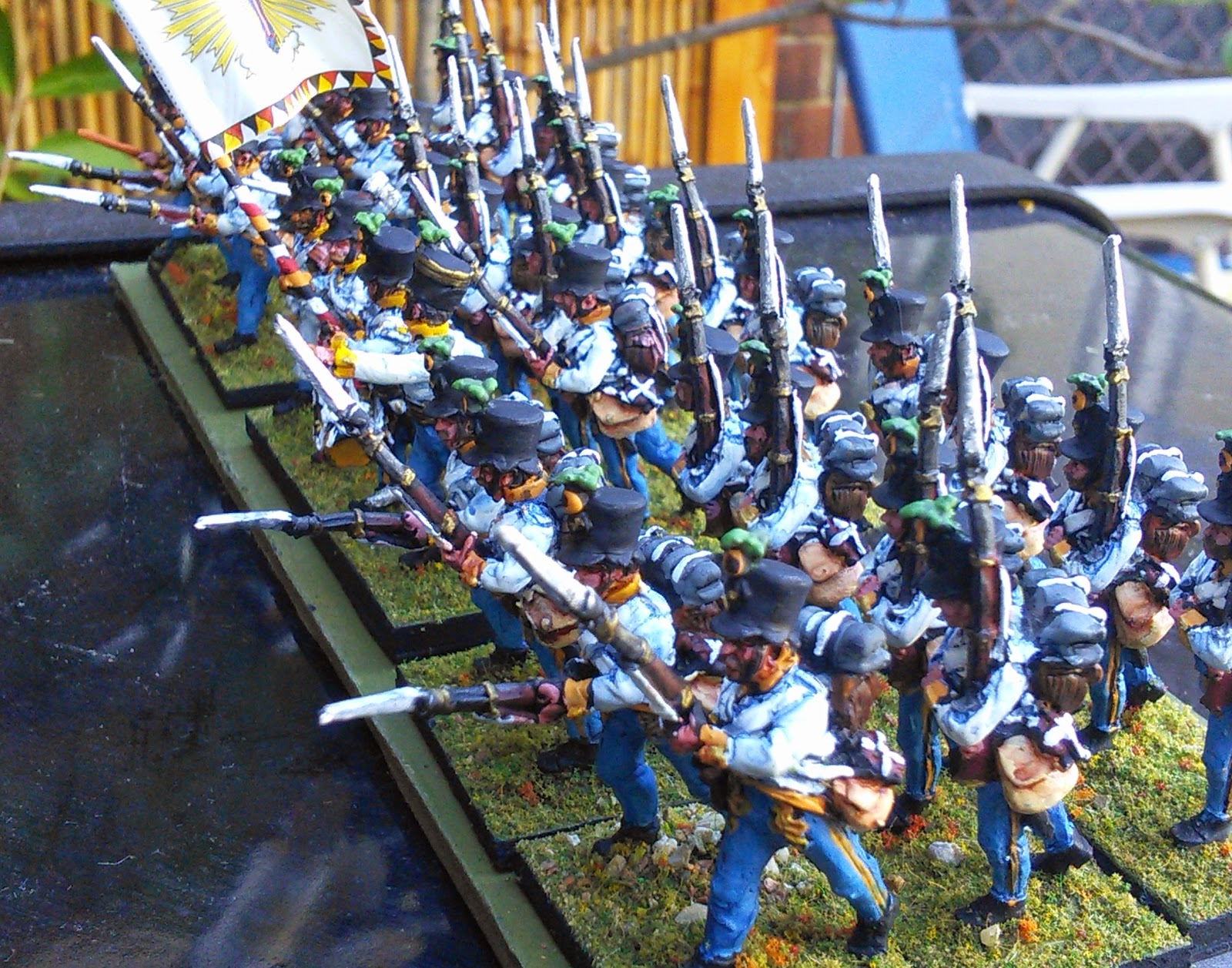 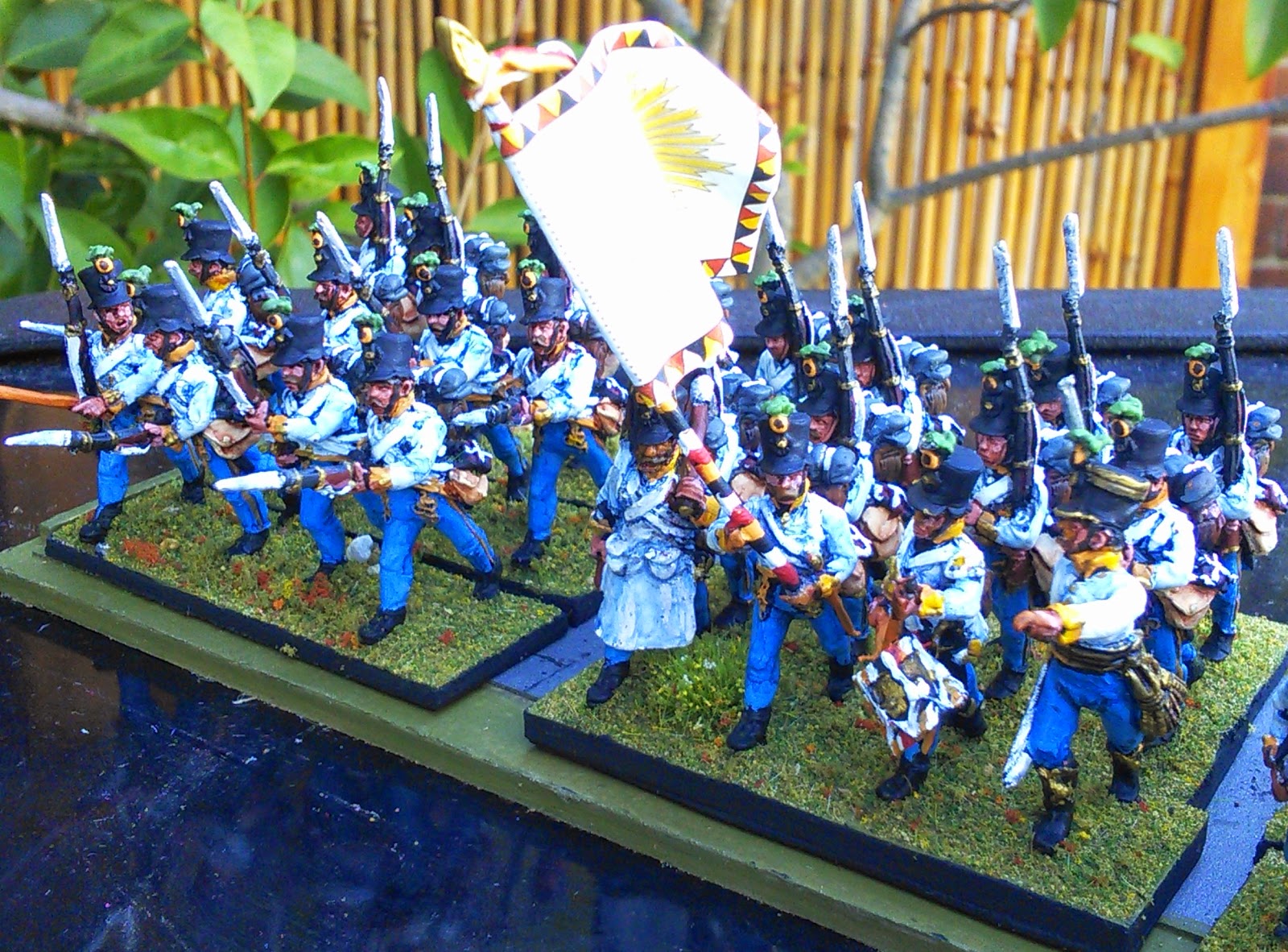 Sorry about the quality of some of the pics - had a bit of trouble with over-exposure in the beautiful but very bright Spring light this morning. I like to take my pics outside in natural light so after this winter, bright sunlight beats freezing your whatsits off in the back yard! 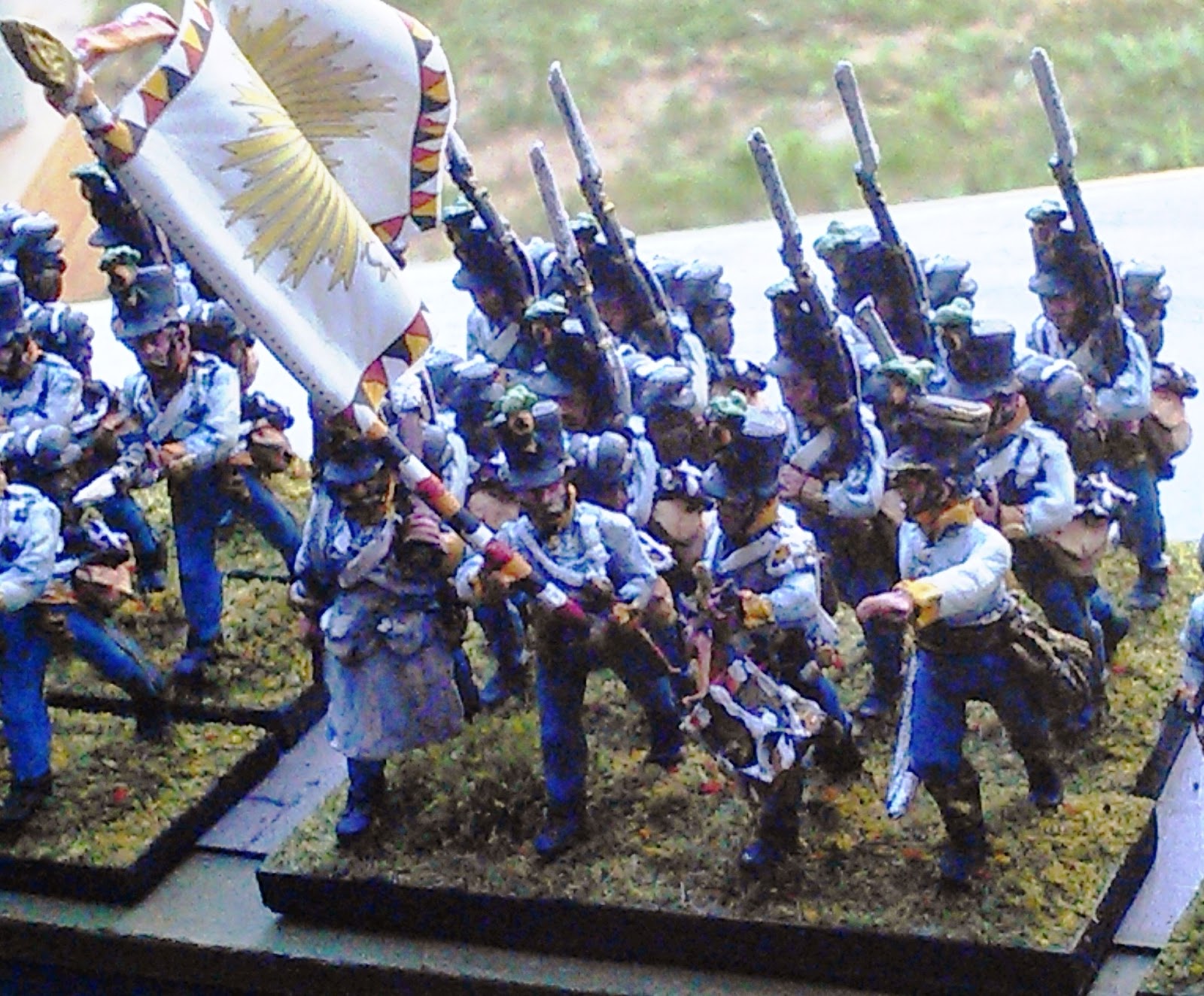 Well, that's about it. Only got another couple of Austrian units to go to finish the reconstituted army off. Still hanging out for some quality Austrian lancers though. I've been pestering Alan and Michael but to no avail - they are having just way too much fun dressing up and riding in AFVs to Arnhem (check their Facebook page out - they appear to be having about as much fun as you can have with your pants on). [Sigh] That'd be the life, eh?  Bit of sculpting. Bit of messing about in camos and armour. Bit of wargaming. C'mon boys - get cracking! Just a few miserable Poles in Austrian service on nice horses in nicer uniforms. How hard can it be? ;-)

Of course I'm kidding myself to think the Perrys have the time to regularly read my blog! Still, they've just put out a range of Bavarians - all gorgeous must-haves of course (I can feel another huuuge order coming on guys!) - so how hard could it be to do a few Austrian uhlans I ask?

Anyhow that's me for another month.  Reckon I'll just post what I've been up to once a month - with the exception of any decent wargames - if I ever get to have one again that is!  People asking themselves 'I wonder what that curmudgeonly old sod Doc is up to?' can now log in just once a month and find out.