Fallschirmjaeger action! Op HANNIBAL and the seizure of the Corinth Canal Bridge

Last Thursday at t'club our group had a nice little Disposable Heroes stoush between the German army's elite paras - Fallschirmjaeger - and a mixed bag of Allies - Aussies, Kiwis and Greeks.  It was based on the actual airborne operation by the Germans (Op HANNIBAL) to seize the vital Corinth Canal bridge - the single crossing point over the impassable canal that if captured and held, would frustrate Allied evacuation plans during the short-lived campaign for Greece.  Andrew, Doug and Leigh were the Allies (with Doug playing a somewhat ruthless Allied commander) and myself, Stuart and Cameron (German CinC) as the Fallschirmjaeger (and this time I remembered me bleedin' camera!) - both Cam and Andrew were also the Disposable Heroes rules gurus which helped us get into it after a tentative start. I should also mention that Leigh contributed the German air power required for our little venture including a magnificent die-cast 1/72 scale Stuka which I couldn't help but photographing - a lot! 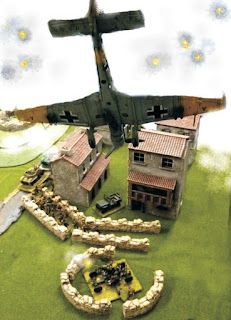 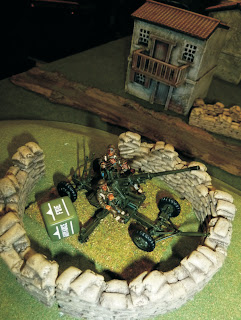 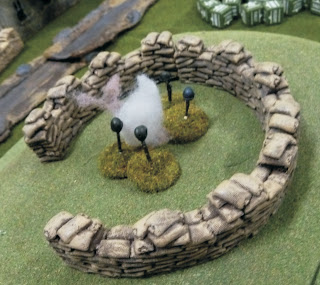 One thing that kept the Germans in the game, even after half of our men were slaughtered, many as they landed, was German air power.  The Stuka sorties at the start of the game put the Allies on notice and took out one of Andrew's beautiful Bofors models.  Had they been able to turn the Bofors on our virtually unarmed men as they landed in the open in broad daylight - well, it doesn't bear thinking about!  But it didn't go entirely the Stuka's way at first with the second Bofors also scoring a hit on the Stuka and driving it away. 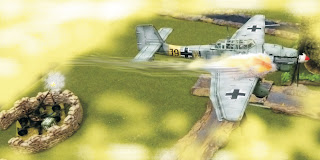 Landing by air is a hazardous business as after Cameron successfully landed his glider-borne troops, I jumping my first squad of paras only to find them separated by the canal from their weapons container!  Unfortunately my inability to land on the chosen spot together with my weapons was to be my lot right up until the last jump of the game (with fatal consequences for half my men!) 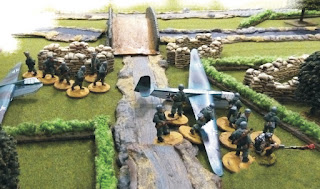 The advantage of the glider-borne squads was that if they emerged intact from an intact glider they came out fighting - fully armed - unlike their comrades who jumped and then had to scramble for the weapons container upon landing (presuming it landed with them of course!)  One of the glider paras most formidable weapons was their flamenwerfer - which the Kiwis stationed at the bridged tried desperately to take out.  The Allies put up a stiff resistance and took out most of the first two squads of German glider troops - but despite repeatedly targeting it, not the flamethrower.  That piece of Teutonic nastiness went on to survive the game and take out the better part of two sections of the Allies in the entrenchments guarding the bridge. 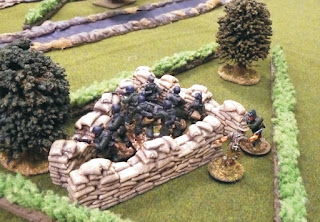 My paras landed minus their weapons but successfully assaulted and took the largest emplacement in a short hand-to-hand which only the Kiwi Colonel survived.  Hans took him prisoner - Iron Cross 1st class coming up for the Gefrieter!

My first squad landed precisely where intended opposite the main bridge defense entrenchment - but minus their weapons container which ended up on the other side of the canal!  The only thing for it was to charge in with sidearms and MP40s blazing.  We forgot to throw grenades but we had extra MP40s - four to a squad instead of two or three (as per orbat!) which we were allowed to jump with.  This itself was a matter of some contention as the Germans maintained that they did jump with them whereas the Allies of course said they didn't!  Andrew (our scenario guru) later said that they were crated with the rest of the weapons i.e. the paras jumped only with pistols, grenades and knives.  I'm sure SOME jumped with the SMGs as being smaller and lighter they could be more readily slung but I honestly don't know if they did it at Corinth.  As it turned out, if we didn't have that firepower, given we were often separated from the weapons canisters, we would most likely have been wiped out every time (in other words, a very boring game!)  As it turned out, all my subsequent squads (save the last) landed in the open without their weapons and suffered heavy casualties as a result.

The second squad of paras landed right in front of an Allied position minus weapons and were forced to run for it.  Half were mowed down in the process and the rest pinned down (see marker) before being wiped out! 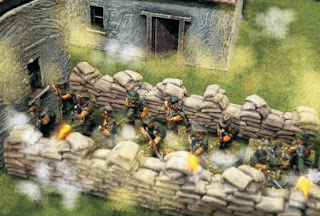 Leigh's Aussies let fly at the hapless German paras landing on the open ground in front.  These guys took out or pinned three of the six squads of Germans opposite. 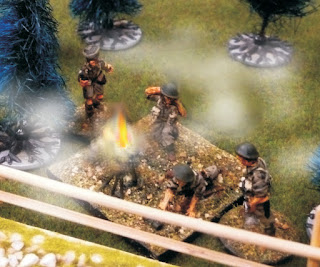 Also causing the Germans grief for most of the game was the mortar in the olive grove opposite the northern end of the bridge - only eventually taken out by direct assault and two rounds of hand-to-hand by an entire squad of paras!

On the southern side of the canal things were a little better with Stuart managing to jump and land both men and weapons in the same spot most of the time.  Although faced with tanks (OK - tankettes  - Vickers lights which unfortunately someone forgot to bring - they had to use my Jerry halftrack recce vehicles instead!) He wasted no time in assaulting the entrenchments at the top of the hill outside the town which controlled the approaches to the bridge. Once the Bofors occupying the position on top of the hill was destroyed Doug had wasted no time himself quickly occupying the position with a squad of Greeks. I should also acknowledge that on the northern side Doug generously let my HQ squad scamper for the olive grove (under heavy fire and taking casualties of course!) rather than conduct a suicidal frontal assault on Leigh's entrenched Aussies (with Brens, a HMG & mortar) across open ground. 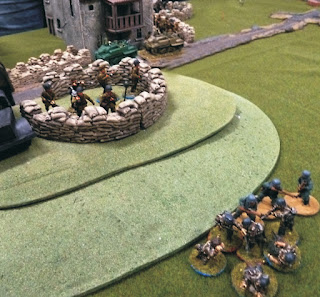 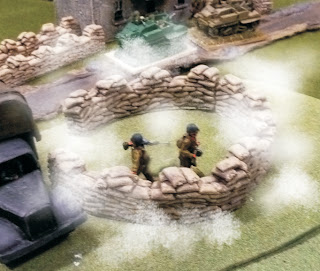 The unexpected victor of Corinth hill - Stavros & his mate with an LMG!

The Germans had every expectation of quickly clearing out the Greeks but it didn't quite turn out that way. In the initial round of vicious hand-to-hand the German's succeeded in almost wiping out the Greeks - almost.  In the subsequent rounds the two remaining plucky Greeks succeeded in destroying the entire German squad to a man.  The first German assault on Corinth ended in ignominious failure.  Perhaps encouraged by this success and the corresponding destruction of one of Cameron's para squads that landed in the open ground on the southern side of the canal in from of the town, the Allies attacked with their armour.  Actually, calling these vehicles 'armoured' is a very loose description as they were basically glorified machinegun carriers.  After some initial success Stuart's and Cameron's well-equipped paras destroyed both Vickers tankettes. 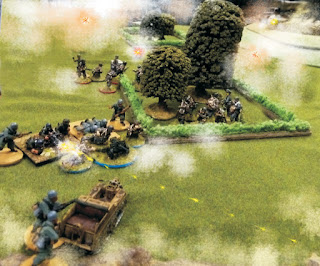 Towards the end of the game the Germans finally succeeded in wiping out the last of the defenders at both ends of the bridge - save for one plucky Kiwi Bren gunner who, surviving the initial flamethrower attack that destroyed the rest of his section, took out half the attacking German glider squad, then half of my Heavy Weapons/Recce squad before finally succumbing to a second attack with the deadly flamenwerfer unit. We all agreed that he would have been awarded the Victoria Cross posthumously!  The final rounds of fighting also saw a suicidal but brave attack by the surviving Bren carrier that wiped Stuarts Kettenrad recce scouts before itself being destroyed by the rest of his Heavy Weapons squad. 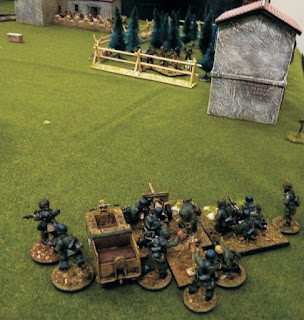 My Hvy Weps squad were lucky enough to land on a previous weapons container as once more they were separated from theirs (seen lying in the distance). They almost immediately started to take casualties from combined Bren, Vickers, rifle and mortar fire from Allied positions in front and a lone Bren to their immediate left.  Within 2 rounds there were 4 men left. 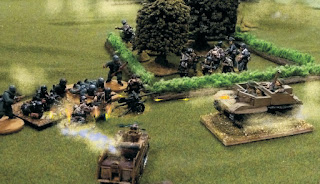 Death ride of the Bren carrier! Note the Kettenrad scouts are kaput!

The final stage of the game saw the Allies suffer more losses, including the remaining Bofors, to another Stuka attack which also sought to relieve the pressure on the northern side by dive bombing and knocking out the Aussie Vickers HMG that had pinned and decimated two squads of paras. The paras in the olive grove also finally succeeded in knocking out that pesky mortar. 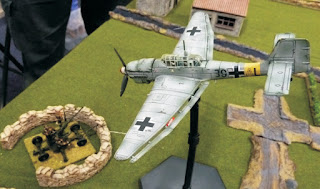 Stuka attacks the second Bofors outside of Corinth 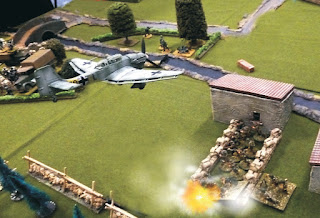 Once again the Stuka run reeks havoc on Allied positions.

The final turn saw a virtual stalemate in that the Allies were still in a strong position holding the town, the hill outside dominating the approaches and a position on the northern side of the canal but the Germans had exhausted all but one remaining squad.  German CinC Cameron suggested I try a drop on the town itself and target the Allied command. I thought, what the hell - why not? I'd tried everything else and mostly been clobbered with over half my force dead or pinned.  Every roll I'd taken to land save one had resulted in me landing off-target and my ammo & weapons canister somewhere else!  So last roll of the dice and viola! - landed smack bang in the town square with weapons canister right on top.  But I didn't stop to gather the canister, instead I used my extra SMGs, grenades and pistols to immediately charge at the Allied Headquarters section which was wiped out in the first round of shooting - game over! 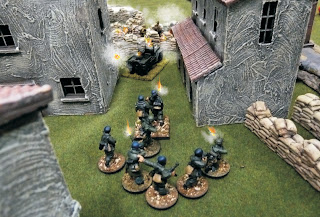 The Allies fought hard until the final surrender, wiping out more than half the German force. That was the last move of the game which went on longer than we anticipated while we sorted out the rules and got used to the vagaries of a para landing in the teeth of determined opposition!  Its impossible to replicate the element of surprise but as it was pointed out, the Germans still accomplished the same (capturing the Corinth bridge) by dropping in broad daylight.  Much more was to follow in Crete of course, which is what we are preparing for.

As usual a big thanks to Andrew for organising the scenario and all the lads for an enjoyable evenings wargaming down at the club.