Last weekend our group (Ian, Cameron and Greg on the Union side, myself and Stuart on the Reb - commander Doug away on family duties!) fought the third of the battles in the series of encounters in the Antietam campaign in which Meade tried to destroy Lee's army piecemeal by forcing a way through the mountain passes and catching Lee before he could assemble the Army of North Virginia. 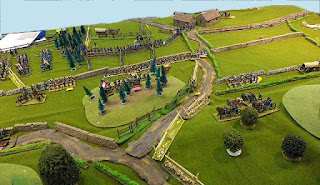 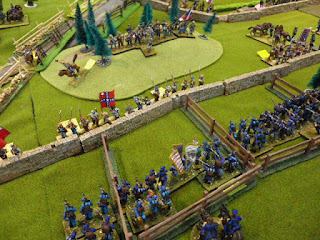 The other half of Cobb's rifle armed Georgians have just made the crest of the hill in the middle to add their much needed firepower to the center of the Reb position. Note the gallant cav commander (Munford) charging madly down the slope - out of command of all his forces save the horse artillery for almost the entire game! ( photo by Greg)

Crampton's Gap was vital to Stonewall Jackson's forces who held the nearby Harper's Ferry so McClelland had been dispatched to force a passage at the third of the mountain passes at all costs.  The Union forces arrived late afternoon, just beaten in the nick of time (arriving a little over an hour earlier) by a small but determined Confederate force composed of McLaws and Anderson's under-strength divisions, and Robertson's tiny Brigade of Stuart's cavalry division for a total of 67 stands (five cavalry), all part of Longstreet's wing of the Army of Northern Virginia.  The Union forces were two full-strength divisions of five complete brigades under MacClelland. The Union forces were able to bring on in total nearly 200 stands - 111 in the 1st Division, with 83 stands in the 2nd Division (we actually ran out of stands of Bluebellies trying to field this force!) 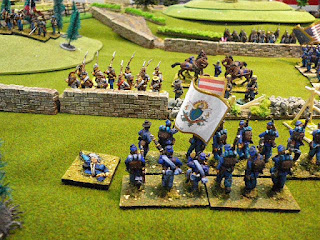 The 24th Georgia and the 12th Virginia cav (a whole 2 stands!) bring a Union regiment to a grinding halt.  They were close enough (just) to be in range of the cav's pathetic shotguns and pistols.  They managed to disorder them and take a stand in their first round of shooting.  They later turned sideways and enfiladed one of Cameron's regiments with their shotties and taking another stand before eventually going down fightin' ! Yeehaa - that's mah boys!!! (Photo by Greg)

The only advantage the Confederates enjoyed at the start was in five artillery batteries present, one of them light horse artillery, represented on the table with seven guns (although with an organisational stuff-up at the start, we ended up fielding only six guns).  The Union only had one battery of four guns (coming on in turn 5).  The scenario was comprised of 9 turns, with turns 7 - 9 being night actions. 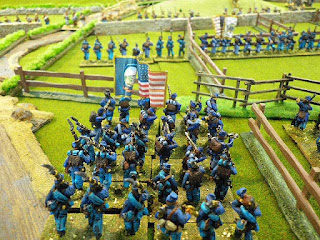 Ian's men continue to pour into the middle, reinforcing the Union firing line.  One lot would be whittled down only to be replaced by another. Some of Greg's beautifully painted figures (photo by Greg)

The scene was set for a pretty desperate fight.

Complicating matters for the Confederacy was the fact that less than half the force was in position at the start of the game, with the rest not coming on until turn 5.  This was a grand total of 27 stands of infantry, five of cavalry and four guns spread across the table to represent the way they arrived historically - in drips and drabs - and all over the place, so that many units like the cav were out of command - another distinct disadvantage. 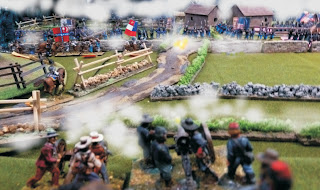 Lookin' down the gun-barrel in the center - Chews Horse Artillery and Grimes Portsmouth (Va) Heavy howitzer get into action at the Union forces always threatening to flank our dwindling forces to the left of the turnpike (and yes, its actually one of my photos this time!) 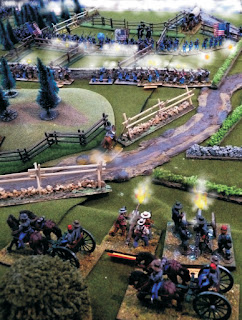 Another shot of the action in the center.  Although it shows plenty of firing from the Reb position, the Union troops actually stopped just outside smoothbore musket range and steadily reduced the Rebs without taking many shooting casualties themselves, with the exception of that from the Reb artillery fire.

Not only that the main Union thrust came first against the centre then left of the Reb line, thinly held by the 24th Georgia (7 stands) and 12th Virginia (cavalry - 2 stands!) on the left and Anderson's Bde (6th, 12 & 16th Virginia - 11 stands) - all save the 24th armed with only smoothbore muskets against the Union rifles.  As you can imagine it got pretty ugly for the Rebs right from the start as the Union troops very un-historically stopped outside of musket range and  started to whittle down the Rebs opposite from the outset - very unsporting!

But the Union did not have it all there own way - the Rebs artillery battery on the far right fired at long range and started to take stands off the Union ranks right from the start.  By turn 2 the second battery set up on a hill in the centre looking straight down the turnpike and began blazing away the the massed Bluecoats, adding to the casualty toll. The Rebs were also saved by the Union commander Ian having an appalling run with the shooting dice, otherwise they would have been wiped out before another of the rifle-armed Georgian regiments arrived to help relieve the pressure. 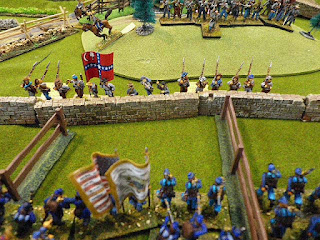 While all this was going on, and frustrated by the total lack of action on the right (the Union forces opposite didn't get to come on until turn 4), on turn 3 (a turn too late as it turned out) the other regiment (2nd Virginia) of the tiny cavalry force made what looked like a suicidal move - mounting up and trying to ride around the back of the Union troops in the center in a daring raid, aiming to take out the ammunition wagon.  Like I said, it was a bold move and had it been made a turn earlier, it may well have succeeded (OK - like a good Reb cavalryman I had a rush of blood to the head!) but pulled up about 3/4s of a move short of the intended target and had to about turn and skedaddle as Greg's blue horde came on. 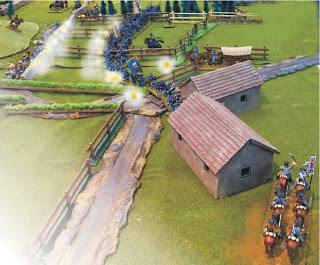 The mad Virginian cavalry attempt a Jeb Stuart style ride  around the back of the Union position (that juicy ammo wagon was sooo tantalizingly close!)  Predictably, it ended in tears.

Interestingly, this mad maneuver may have well saved our bacon as Greg tried too shoot them down, rather than go hell-for-leather at our vulnerable right, manned by only the 16th Georgia (7 stands of smoothbores) and the gun batteries of Hamilton's divisional artillery (2 light smoothbore & 2 light rifled), the latter of which found themselves once more in a target-rich environment! 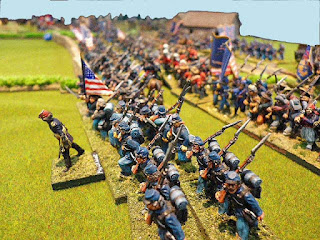 Greg's Union horde finally get to come on in turn 4.  Note Reb cavalry have skedaddled just ahead of the blue tsunami (photo by Greg) 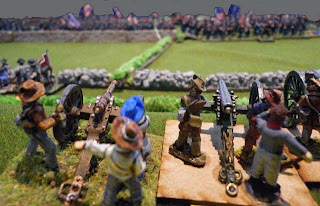 And the view from Hamilton's guns on the ridge opposite.  A target-rich environment indeed!  Note that the two surviving stands of cavalry have joined the Georgians behind the stone wall to the left, to add their feeble pop-guns to the Reb firepower! ! ! (photo by Greg) 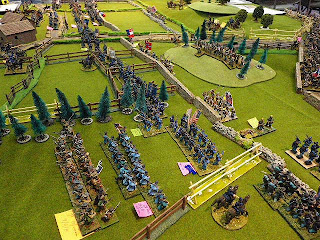 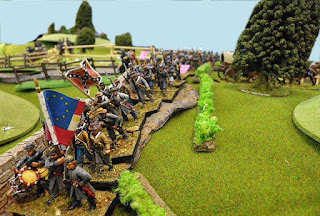 The madness was contagious as on the Union right Cameron launched two of his regiments in march column straight at the last line of Reb's defending the road leading to the key position (and Union objective) of Wise's farm.  Had the Union found a way and forced their way through it would have been all over for the Confederacy as that road was also the one through which all our meager reinforcements were funneled.  It was a moment reminiscent more of the French on the Peninsular - and they were beaten off by the Georgians in much the same way. 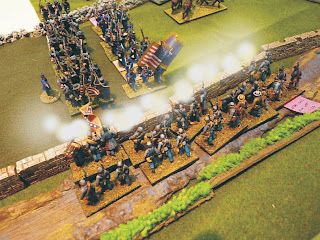 I think its the 9th Carolina of Cobb's Bde giving a very Wellington-esque greeting to the Union columns trying a very French 'cold steel' to dislodge them. In truth it was a gamble by Cameron that nearly came off.  If we hadn't rolled well on our shooting we would have been in all kinds of bother (photo by Greg, modified a bit by me)

The last phases of the game - turns 6 to 9 were mostly Union attempts to turn our right or finally punch through our center before night fell and brought a halt to the fighting.  In the turns conducted in the failing light all suffered from half effect on any shooting.  But not before the Reb horse artillery and heavy howitzer in the middle (the only survivors of the Virginian cavalry brigade as it turned out!) got some great shooting on the arriving Union artillery, destroying one gun and limber, damaging another and taking it out of the game and silencing the battery for one turn in three rounds of shooting - not bad going at all.  Just as well as the Union guns, combine with Greg's massed rifles managed to also silence Hamiltion's guns on our right and take one of them out too. 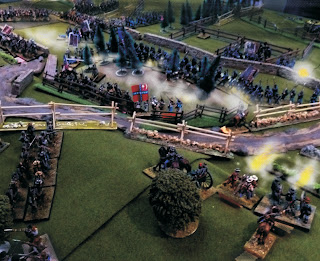 The fighting in the center turn 8 - the Georgians have withdrawn from the crest of the hill as the last of the Virginians of Mahone's Brigade are overrun in front.  Note the rest of Cobb's Bde firmly hold the left and the Virginian artillery kept firing until the last minute. 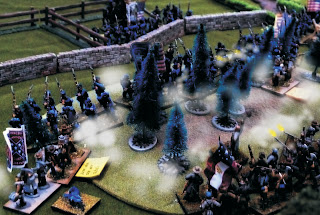 More of the desperate and confused fighting in the center as night fell and the lead Reb units attempt a fighting withdrawal. 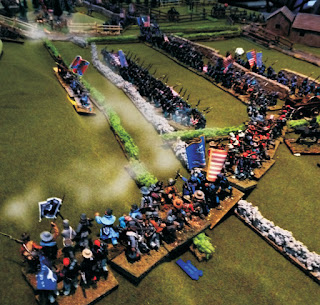 A massive volley from Greg's men on the right finally put paid to the Georgians and Virginian cavalry - just as well as they promptly ran out of ammo doing it! Note the artillery are long gone, after getting a few more hits on the massed Union troops now curling around the Reb right flank - all too late as it was 'lights out folks'.

At the start of the night turns (7 to 9) the casualties were about even but the fighting actually became more confusing (just the way it did historically) and I lost count.  I got the impression that the Rebs had inflicted more on the Union in the final turns as our rifle armed units got more into the action but I could be wrong as we literally had to sacrifice the entire of Mahone's Bde (Anderson's Division) as well as our cavalry and some of Cobb's Brigade to hold up the Union forces and prevent them from forcing their way through the gap or rolling up our lines.  We were also able to get all our guns away which was a real bonus.

I have to thank all the boys for a great game including acting Reb commander Stuart who tolerated my annoyingly unhinged use of popgun armed cavalry with good humour and Andrew for once again meticulously putting together yet another exciting scenario to fight. Thanks also go to Ian who, although a damned Yankee, organised our new venue at the Lanyon Vikings Sports Club, complete with acres of room, luncheon servery and wet bar (what more could a hungry thirsty gamer want I ask?)  Finally my thanks once more to the talented Greg who took the lion's share of better photos and was good enough to send them to me for posting on the blog.

Next battle will be WWII - the Greek campaign involving my newly painted Fallschirmjaeger attempting to seize a bridge over the Corinth canal in a few weeks time.  Until then its adios amigos from Doc.