The Kokoda Campaign - the first round

The first battle got off to a rattling start.  Our group organiser, Kokoda historian and supplier of most of the figures and terrain, Andrew (one of who's ancestors also fought at Kokoda!) devised the initial encounter scenario that differed very little from what actually happened at Wairopi.   Templeton and his 'B' Company of the 39th Bttn. were the first over the Owen Stanleys and arrived in Buna on the coast just two days before the Japs landed! 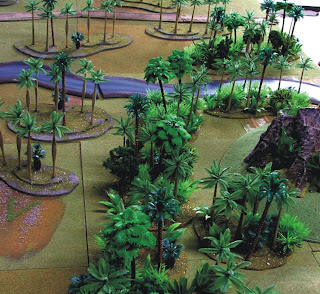 Just an example of Andrew's great scenery - that's some real jungle!
In our scenario Templeton kept half his tiny force together and ordered Seekamp's platoon (me) forward to set up on the slope of a hill facing down the track.  The Australians have three platoons (one of them local Papuan Infantry Bttn) supported by a heavy weapons section of a mortar and a Vickers MG.  We decided to site the MG up the slope pointing directly down the main approach.  There's one Bren and three clapped out Lewis guns for the four 9-man sections (2 sections per platoon).  The NCO's also carry SMG's - mostly Stens at this stage of the campaign - so at least one of those per squad too.

After rapidly digging in, my 1st squad awaits the Japanese 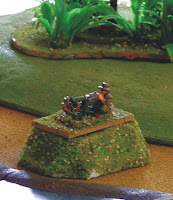 We also kept the Papuan platoon hidden in the jungle at the head of the track.  The positions are just foxholes - nothing fortified or reinforced as there wasn't time.  Siting of the Vickers proved crucial as it enabled us to bring support fire down on them as they attempted to close with our advance position.
It wouldn't fit into the foxhole created for it - but it didn't look to bad sitting on top.  Although it stands out like dog's whatsits. it is in fact a concealed position! 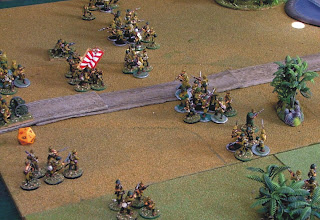 This is what was coming directly at me - half a company of Japanese.  Their squads are roughly 15 men each, so their platoons are 1/3rd again the size of ours.  They are supported by a heavy MG, two mortars and a mountain gun!  And this was just the first lot - Gawd'elp us! 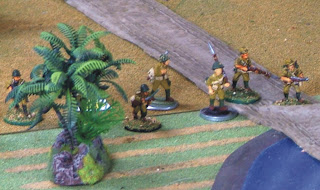 As soon as they came into sight we let them have it.  I was feeling quite chuffed as I easily wiped out the first two squads to a man, but about half of the second got as far as the creek in front.  Here I got my first lesson in being very aware of attacking Japs!  After nearly wiping them out, they did their 'gut check' (morale in Disposable Heroes rules) and they failed which meant...  they either 'Seppuku' and disappear OR ...  BANZAI!!!! 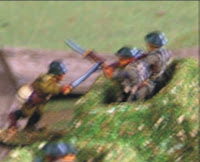 These guys rush at right you and you've got just one opportunity to pour on the fire and wipe them out because, as my amused Jap commander Andrew helpfully pointed out: 'you really don't want Japanese in your trenches'.  They are quite deadly in hand-to-hand.

The blurry picture is the result of the photographer jumping out of his skin when one of them suddenly gets through!  Fortunately two bayonets were better than one sword on this occasion but bit too close for comfort!

And that was just the left flank.  Same again was advancing rapidly on the right. 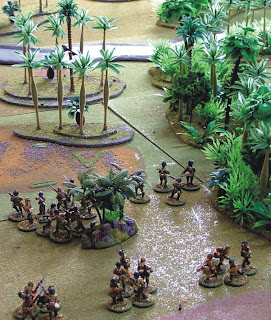 That was just the first round of fighting.  My squad soon came under sustained mortar and heavy MG fire, were literally pinned in their foxholes and started to suffer casualties.

The story continues in the next posting!