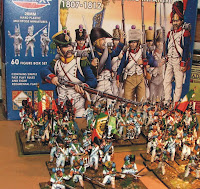 I posted some time ago that the 60 figures in the Victrix French Infantry 1807-1812 box made it virtually a 'brigade-in-a-box'.  I decided turning all of them into Italians. I finally finished the other half of the box.  There are plenty of spare bits and command figures so that I was able to made three separate regimental command stands and enough commands for no less than five 12-figure battalions.  I have to say, I am impressed by what you can get out of box of Victrix figures. A very cheap way to build an army and they are very nicely done figures to boot.


The only criticisms I have are the size (scale creep got mad - they are virtually 30mm figures, definitely NOT 28s!) and the overly slender muskets and bayonets which have a nasty habit of breaking off.  The good news is of course, being HD plastic, they are very repairable - if you can find where that skinny bit that snapped off when to! Modeling tip: for those of us used to superglue - don't bother. You will get a far superior result with quicker bonding using proper plastic model cement. I used Revell that comes with that long slender applicator spout thingy and swear by it - not at it. 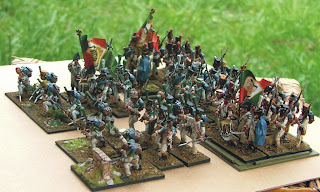 In setting up the brigade I tried to be as flexible as possible with the basing as with light plastic figures, re-basing is really not an option. So apart from the command stands, most are the 45x20 two-figure bases.  I've also used some of the 60mm ones that come with the Perry's boxes for three-figures stands which have free standing singles to add (or not) as you please.  What I ended up with was five 12-figure battalions: two Cacciatore (Italian Legere equivalents); two line and one grenadier battalions.  By taking away command stands these can be re-configured into regiments or even at 1:20 scale a single 40 figure battalion with two 8-figure elite companies for really, really big hairy chested Black Powder gaming! 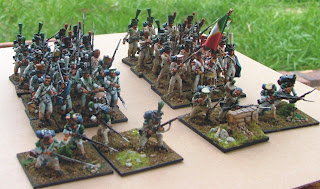 As I have already used the kneeling figures for skirmisher stands, I decided to do an entire light infantry unit - the Cacciatores - the Italian version of the Legere. 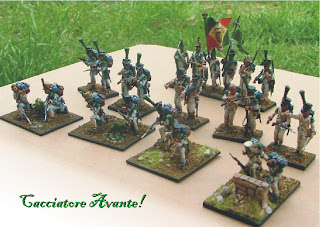 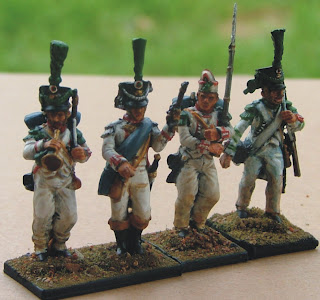 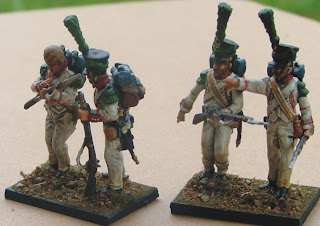 As you can see I used a few Perry heads to add further variety.  I know I've posted it before but the Grenadier command is a favourite of mine and now with the second regiment completed I have enough figures for a converged grenadier battalion.  I think the Victrix grenadiers are great figures to make up. 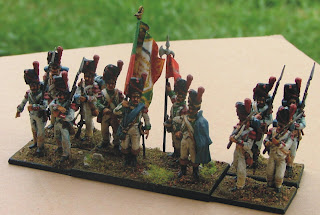 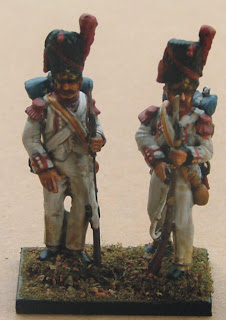 I must say, the figures en masse  have turned out better than I hoped.  I don't think the size will made that much of a difference on the table - they mix in with Perry's 28s quite well (must remember not to put the Italian grenadiers next to the French cuirassiers though!). 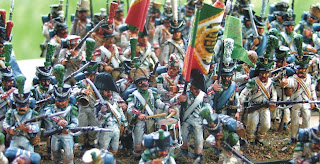 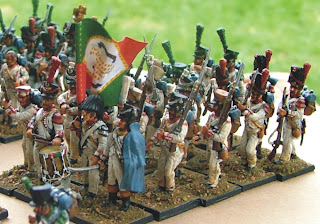 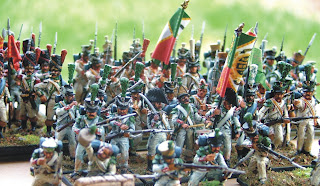 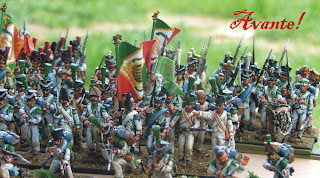 Must away now as the Memsahib (She-Who-Must-Be-Obeyed) is on the warpath as in the aftermath of finishing my Italians, the study is not up to her exacting standard of cleanliness and hygiene and I fear violence may ensue if I don't get off the computer.  This will be my last posting for a few weeks as I also have one last uni essay to write.  After that, hopefully the French hussars (or Carabinier or...)
Ciao for now,
Doc
Posted by Doc Smith at 11:17 AM