I'm afraid that spider post is giving me the creeps so I found some shots I took of the collection in the cabinet when I did the wargamer's equivalent of 're-arranging the sock drawer'.  Frankly it needed it badly. 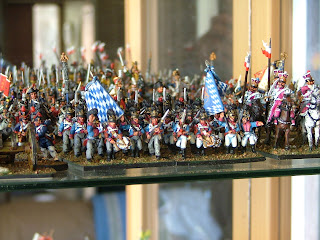 First cab off the rank are the Bavarians - well one regiment of them at any rate.  I had to remove the figures cabinet from the family room, where it served a useful purpose embarrassing my children by constantly reminding them what a nerd their Old Man is, to the slightly less obvious place in the old lounge room.

This required removing hundreds of figures and cleaning all the dust off the cabinet shelves etc, then re-packing those shelves with a slightly different display.  The whole exercise took bleedin' hours and I was so glad to finish I got the camera out and took some pictures.  As you do of course. 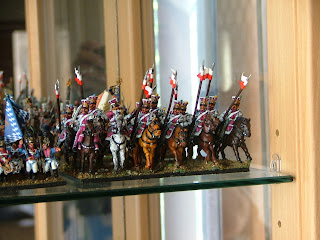 This shot is of the Berg Lancers next to the Bavarians.  They are slightly converted Elite figures who absolutely tower over the old Foundry Bavarians next to them, the latter having positively Teletubby-like proportions and stature in comparison.  The lancer pennants are my own, made using the colour printer at home and a bit of PVA glue for a nice wavy effect - "Vive l'Empreur!" 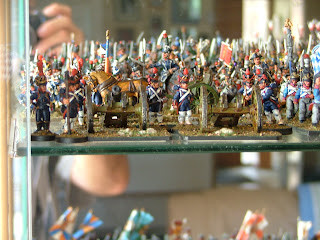 Above, my first French (foot) artillery battery with really nice Foundry crews and Old Glory guns and limber just behind.  Bit of a scratch built outfit but at the time I wasn't allowed to spend the kid's inheritance to buy a proper one! 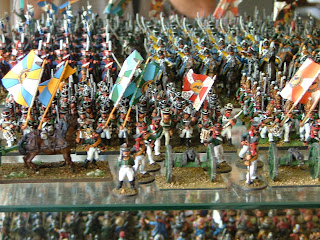 My massed Russians, mainly Front Rank & Foundry with a regt each of Elite Hussars and Dragoons.  I really like the FR artillery and because they didn't produce one, I scratch built a limber with Old Glory and an Elite artilleryman as the horse holder.  Apologies for the slightly blurred photography, must have imagined 'Boris' scuttling across the ceiling above me. 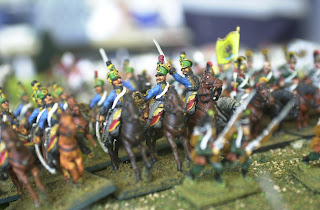 Last but not least, my Austrian cav in action "Vorwarts Meine Kinder!" - on a tabletop somewhere.

These are my Elite figure hussars, when I had a full regiment.  They are supported by some Dixon(?) dragoons behind and some Russian jaeger in front trying not to be ridden over.  Alas most rode off into glory and somebody else s' collection [sigh]  Just have to collect them again - you can't 'ave a decent Austrian army wiffout 'ussars!

So, maybe a bit pedestrian and indulgent even for this blog BUT better than pictures of 'airy great spiders, I'm sure you'll agree!