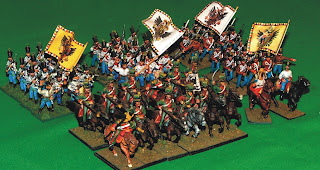 Austrian Advance Guard consisting of Uhlans, Grenzer & Hungarian infantry
Relaxing after finishing my uni work, I decided that I needed to re-train myself to draw.  Its been a while and I'm a bit rusty so I thought I'd start simple with some of my favourite figures from my favourite Napoleonic army.  I used my figures and some Ottenfeld drawings (my favourite military artist ja!) to try a few rough sketches. 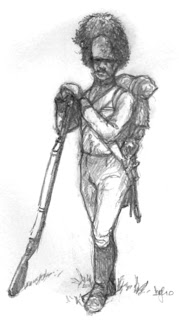 The first is a grenadier in his famous fanteul - 'armchair' bearskin.  Its not a patch on Herr Ottenfeld's but perhaps its captured something of a 'German' grenadier of the period.

All grenadier companies (two per regiment) were put together in converged brigades as part of the Reserve Division, together with the heavy cavalry (usually Kuirassier) and positional artillery (usually 12 pdrs).  As the Austrian army didn't have elite formations, in a sense these grenadier units were it. 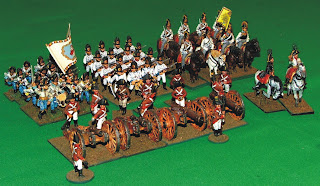 I did a few more sketches, the one that I think turned out best (next to the grenadier) was one of an Austrian 'German' fusilier.  He's wearing the leather helmet with woolen 'caterpillar' crest, brought in from 1798 to replace the old leather casket type cap.  These were all eventually replaced by the shako as they thought the helmet too expensive.  The Hungarian regiments got their shakos first, so that by 1809, most were wearing them but the German regiments still had their helmets with some regiments like Deutschmeister, holding onto theirs long after the others had replaced them with shakos.
Our 'Kaiserlik' was part of two field battalions - the third being a depot or training battalion - forming a 'German' regiment, two of which formed a brigade (two brigades, standard line division).  Nominal paper strength was 4,575 men with a wartime establishment of 230 men and 4 officers per company (6 companies per bttn) although the usual muster strength was around 180 per company in practice.  This naturally shrunk alarmingly through attrition in the field.  By the time of Wagram, after a few months campaigning, many companies were about 60-80 men. 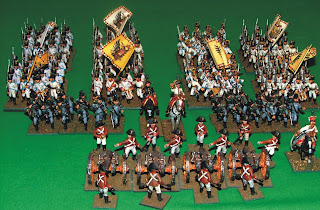 Line Division with attached Jaeger battalion and div artillery (6 or 9 pdrs)
The Austrians never had light companies in their line regiments, but separate light infantry regiments - not to be confused with the Grenzer or Border regiments, who also used to act as light infantry (although less so as the wars progressed).  A Jaeger regiment of three battalions of six companies was formed in 1801 to replace the light infantry. By 1808 it was expanded to nine 'divisions' each of six companies.  These divisions were spread throughout the line formations and with the specialist Advance Guard Division.   I tried sketching a Jaeger but he didn't turn out that well so I'll have to try again sometime. 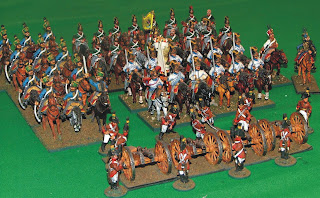 Light Cavalry Division with attached battery (6 pdrs) - the Austrians didn't have horse artillery
I do like my Austrian army which I will have to get back into action again soon!

I've also been toying with the idea of a uniform guide for the Austrians that will be a bit more practical than the very historically based Ospreys. If I did it it would be aimed specifically at wargamers to provide all the basic information needed to collect and paint an Austrian army. But I wonder if anybody would want one? Got to practice my drawing though - its still a bit shaky after such a long absence.
Well, that's about it for now. I've just been modeling and base-coating my French hussars and will have to get stuck into them next.
Auf Wiedersehen Meine Liebchen - Fur Gott, Kaiser und Vaterland!
Doc
Posted by Doc Smith at 7:03 PM