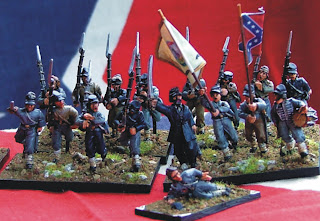 These are my Virginian Military Institute cadets. Four 60 x 40 stands of four figures each plus the casualty marker.  The little white corners denote 1 - 4, so the marker can be used for up to four casualties in BP games. 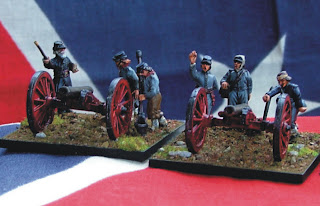 Two of the 'Apostles' under the command of a VMI instructor with brass-tipped lecture pointer and text book under his arm - great figure from Redoubt! 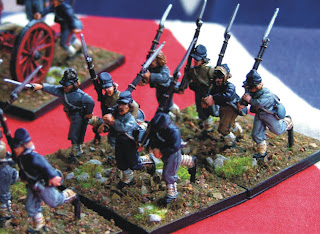 Detail of the boys advancing at the trot with shouldered arms.  I've photo'd them on the backdrop of a real Confederate flag I bought in Virginia - not a whole lotta miles from VMI in fact! 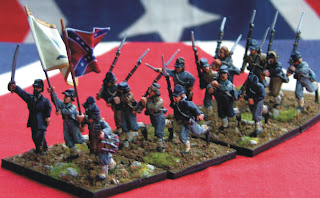 VMI cadets in column.  Sorry about the lousy photography but I rushed it a bit and my tripod broke (grrr - cheap Chinese crap!) so I had to do 'em by hand hence they're a bit shaky - like the photographer! 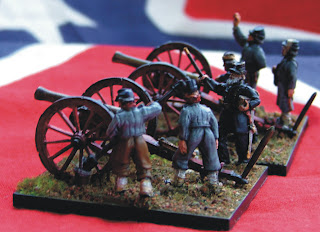 Last but not least - the 'Apostles' in action.  I decided not to include the kneeling dude - too awkward to fit on the base.  I've revised my opinion of the Redoubt figures too - they look mighty fine when painted and based.


Hope you like the results of my first foray into ACW - click on the pics for an enlargement and please feel free to leave a comment.