Finally finished my Perry's French Dragoons.  I've made up a regiment (the 4th) of four squadrons including command and elite squadrons, each of four figures for a 16 figure unit.  This gives me another 10 mounted figures should I want to expand it further.  Maybe I will but I have the Carabinier and Hussar regiments to complete first and at this pace I won't be finished before Christmas...  next year!

Still, I've reasonably happy with the result - Perry's are such a joy to paint.  I had heard criticisms of weaknesses in the design of some of the figures and discovered this for myself by snapping off a horse from its base while removing it from its paint stick.  Fortunately it wasn't the disaster it would have been with a metal figure - bit of glue and it was as good as new.  Bloody nuisance nonetheless. 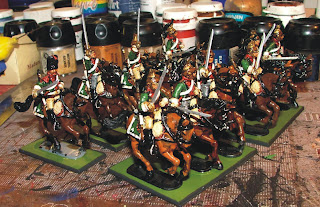 The above are the extra eight figures with paint finished and mounted on bases with - you guessed it - Army Painter (strong tone) applied.  I decided to do this rather than depend on layered washes to see how it looked.  I didn't put as nearly much detail into the horses and think I largely got away with it.  Certainly saves time.  Despite the shading effect of the Painter tone, the figures required highlighting of the green and red of the jackets as well as the white cartridge belt and gloves.  I needed to pick out colour on the noses and cheeks of the faces otherwise they appeared too dark.  Ended up using a very diluted flesh wash over the flesh highlighting anyway to blend it in.  My usual flocking job on the bases and then hit 'em with a decent coat of matt varnish and they're done! 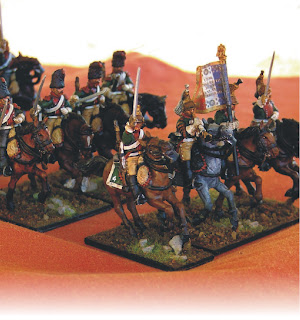 I took the pics outside in bright light using a faded brick-red tablecloth as ground material.  I rather liked the effect, which was purely by accident, as it looks like they're crossing a desert in the southern or central Spanish badlands.  I'm sure Rafa will tell me it looks more Morocco - North Africa than Spain but I really like the contrast the colour has produced with the figures. 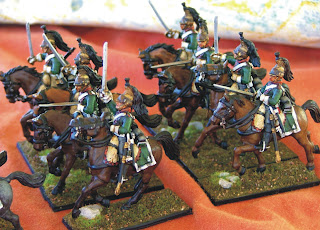 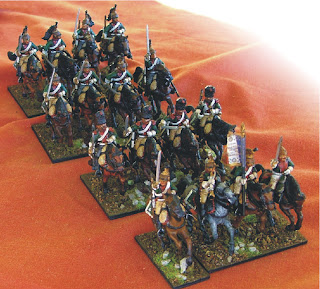 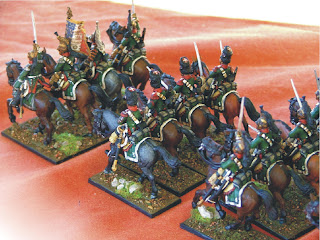 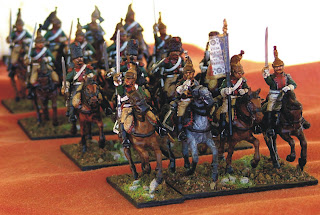 The additional figure on the left is made up as a Marechal des Logis with the rank and ten-year service chevrons on his sleeves. 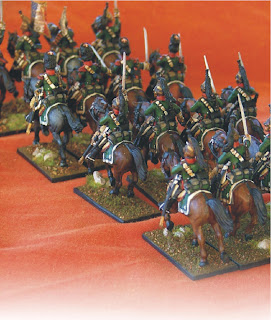 Together with the dismounted dragoons, there are enough for the entire regiment to be deployed either way.  Pity the Perry's haven't done any horse-holders and standing horses as they'd come in handy.  Perhaps readers of my blog can join me in lobbying them to make these additions in metal?
Its taking a long time between posts for me with work and finishing uni.  It doesn't show any signs of easing up anytime soon but I will try and make them a bit more regular if I can.  Got a Black Powder Sikh Wars game this weekend, so hopefully I may have some nice pics and a battle report to post soon.
Cheers,
Doc
Posted by Doc Smith at 9:18 PM