Some more of Doc's art

A friend asked me for a print of some artwork I did some years ago.  Fossicing through my old artwork I found the print and quite a few others, some of which were pretty naff but others were, I hope, worthy of posting on the blog.  They are mainly of Napoleonic soldiers - a selection of French, Austrian, Polish and Rhineland Confederation (Napoleon's German allies).

First cab off the rank is the colour version of one I published in an earlier post:  an Eclairer of the Guard.  This short-lived unit (1813-14) was formed in response to the French experience of the cossacks!  These were about as irregular as French cavalry got and performed prodigious feats as scouts and skirmishers for the hugely outnumbered and hard-pressed French army in 1814.  It is telling that at a time of great shortages of all cavalry types, Napoleon made it a priority to form several regiments of  new cavalry.  From all accounts these guys out-cossacked the cossacks!  I don't know if the unit was reformed for the Belgium campaign in 1815. 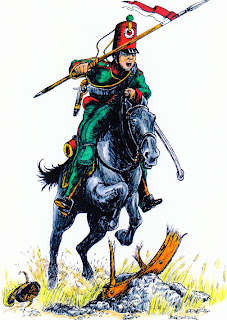 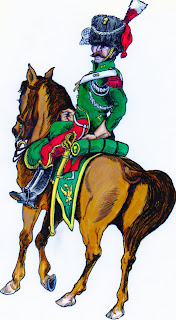 The next one is another light cavalryman - this time a Pole circa 1812 - one of Poniatowski's Guides.  I did a rather cartoonish rendering of him as I have a rare old Historex model of one to build and wanted to create a painting guide for it.

The next two are of my favourite Napoleonic army - the Austrians.  It was the first one I collected and at one point contemplated sculpting my own range of 25mm hard plastic figures, so I decided on some artwork to start the process off.  Unfortunately I had neither the time or money (or sculpting skill!) to see it through, so the artwork was the end of the process too! 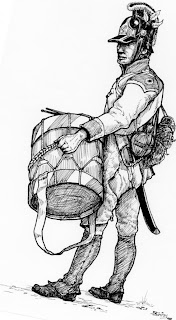 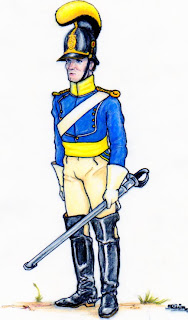 The next is a Wurttemburg Chevau Leger (Light Horse) which I did for a German friend of mine who's family were from Wurttemburg.  He could trace his ancestry back to a Landesknecht in 1530 something and told me that many had been soldiers including some who either fought with or against Napoleon.  The Wurttemburgers were some of Napoleon's best German allied troops. The trooper depicted was from the elite Light Horse regiment that particularly distinguished itself in the 1809 campaign against Austria.  Unlike many of the other 'Rhinebund' troops, these guys didn't go to Spain but to Russia with Napoleon where they were pretty much wiped out.  I'd like to think my friend's ancestor was one of the lucky few who made it home!


The last one is a French 5th Hussar officer.  I did this one off a photo of a model in the Army Museum in Paris wearing the original uniform.  This is the colour version of the line drawing I posted earlier.  I've decided to make my Perry's hussars up as the 5th - simple colours for a hussar but tres elegant nes par?

Last but not least, I used to get into cartooning and drew this one for one of my sons to go with his Orc army (that I collected on his behalf!)  The drawing was blown up to A3 size, coloured and mounted on his bedroom door - it was a lot more popular with him than the fantasy figures I painted! 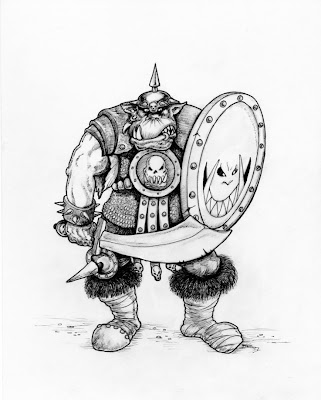 All the pictures can be enlarged by clicking on them.  They are all original artwork and copyright, so feel free to download them but if you want to use them don't do it for any commercial purpose and remember to attribute OK?  I hate to ask but the web is notorious for people pinching other people's creations and using them as their own!  Not cool!!

Hope visitors to this blog enjoyed this artistic interlude - back to some figure painting as soon as I've gotten a uni essay or two out of the way!