After viewing a few other cabinets on other blog's I've decided to show mine - in the forlorn hope that some other Aussie blogger will know where to find another just like it!

I bought it about seven or eight years ago for the princely sum of $360.  There was another exactly the same available at the time but I just couldn't justify over $700 for furniture to store/display my figures. She-Who-Must-Be-Obeyed AKA Minister of Finance frowned upon the purchase of just one cabinet, there was no possibility of negotiating a second! 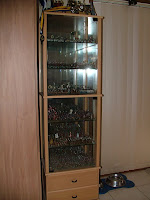 A few weeks later I managed to sell one of my children...  OK, it was a few of my figures - and screamed into the furniture store to get the last one but alas I was a day too late - the last one was sold!  The company that made them were not the most reliable of suppliers and the local company that was selling them ceased doing business with them.  Last year I saw exactly the same type of cabinet - now only available in a ghastly silver or dark walnut finish AND on sale for only $800 each!  That's over $200 off their current price - bargain!!!   (The dog bowl next to it is a reminder of where I'll be - the dog house - should I try buying one).

The long and short of it is that they are superb display cabinets.  The original came in a flat pack but easy to assemble.  In two halves with mirror backing and adjustable glass shelving makes for six display shelves with two storage drawers under.  Brilliant.  Maybe one day I'll find another just like it - it is very IKEA-like so there is a slim hope. 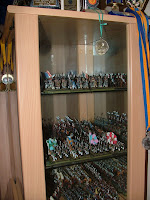 I mean seriously, you need to protect your hard work and keep the dust off them (a big problem in a dry and dusty place like Australia) - so its either into a box or in a sealed cabinet of some sort.  Plus I like to look at them - and so do my fellow enthusiasts when they drop around.  You gotta have a display cabinet for any games room right? (Got the cabinet, still working on the room...)

I have in this cabinet a bit less than half of the 28mm collection.  The top half houses the Napoleonics - French, Russian & Austrian armies.  About half of the French and Austrians and two-thirds of the Russian.  The bottom half  has nearly all of the 17thC Poles, the Thirty Years War and the Franco-Prussian War French armies. 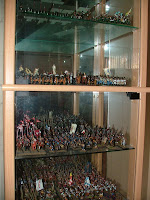 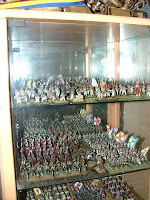 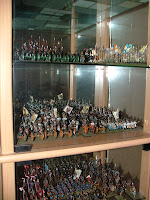 In reality, I could fill two of them with the Napoleonic collection alone - but perhaps that's a dream for retirement in a few years time.  Us old codgers gotta have dreams right?! 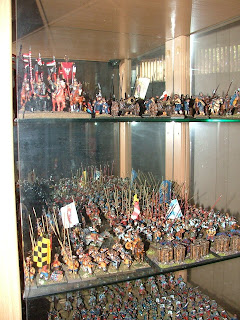 So while it mightn't be as comprehensive as some others I've seen on the web, it does the job for me and there's even room for some of the boy's footy trophies on the top for good measure!  Nearly all the figures in the cabinet are also on display in this blog through the links on the right of the page.  As with all photos, click to see the enlargement - for example, the one above will also show that I need to clean the cabinet's glass door!