As I stated in my previous posts, I was preparing for another game using the Black Powder rules, this time the Indian Mutiny.  Our Canberra Black Powder group gamed one of the battles fought by Havelock on his third and final attempt to raise the siege of Lucknow, a desperate gamble with a tiny force the defeat of which could have seen all the native princes 'sitting on the sideline' come into the conflict against the British i.e. the end of British India.  So, small battles but the stakes were rather high!

Our force consisted of three brigades - the 1st with two British regiments including the 79th Highlanders and accompanied by loyal Sikhs, the 2nd of two British regiments and one loyal Sepoy.  The 3rd (my command) consisted of a small unit of British Lancers, Horse Artillery and Foot Artillery batteries.  All brigades had one small unit of rifle armed skirmishers attached.  The Mutineers had six brigades of infantry and one of cavalry in addition to two heavy gun batteries behind entrenchments - the latter proving an impossible nut to crack! 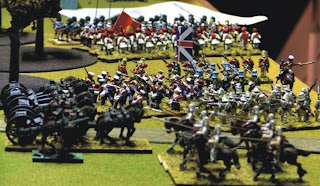 Historically Havelock marched across the face of the Mutineer army before hooking around its right flank and then literally rolling it up.  While they had to endure the galling fire of the Mutineer's well-sited artillery, coming around on their flank meant the Mutineers could not continue to bring all their guns or overwhelming numbers to bear. And of course - the Highlanders successfully charged the guns! The scenario basically recalled the historical deployment.

We ran into trouble almost immediately because the very unhistorical Mutineers who rather than being puzzled by British tactics, charged out of their lines and started a prolonged fire-fight as soon as the 1st Bde began to deploy.  Accompanied by appalling dice rolling by the Brits for their shooting and good saves by the Mutineers (which they managed to do consistently all game!) the Brits became stuck in front of the entrenched and well-served Mutineer guns! 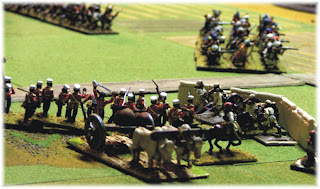 On the left flank things got off to a slow start with my lousy shooting for the first three turns - in fact all four of my guns only managed to all hit something just once the entire game!  The flank was held by the artillery (all light guns) with small unit lancer and skirmisher support.  Firing at the Mutineer's guns proved a complete waste of time but they fortunately stopped a large warband of Ghazis.

Having killed their chai-wallah, the Ghazis milled about in confusion within charge range of the battery for two thirds the game before finally being driven off.   Meanwhile the lancers (special characteristics 'ferocious' and 'marauders') made a long ride around the Mutineer's left flank and proceeded to shatter one regiment of regulars (who amazingly managed to rally and form a shaky square for the rest of the game) another of irregulars and a regiment of cavalry before stopping, disordered (and blown) about two inches short of those bloody guns! 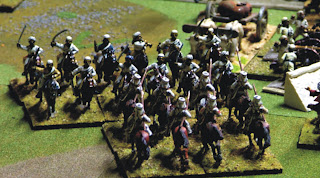 One small unit (8 figures) destroyed the better part of an infantry brigade and a regiment of cavalry twice its size, suffered horrendous casualties from point-blank artillery fire (canister of course) but still stood and would have charged again (and won) against the guns if the game had gone one more turn.   'Ferocious charge' is not an adequate description and our group are debating whether or not this characteristic is historical and therefore warranted, or overblown for gaming purposes - creating a unit of mounted supermen.  So far the 'historicals' have it - the men were hugely motivated by the massacre of their women and children by the Mutineers and were consumed with hatred and revenge - nothing but being wiped out could have stopped them - so 'ferocious' is a reasonable reflection of their morale.  They didn't have it all their own way - they were disordered by the regulars shooting and had to 'rally' for a turn before resuming the attack.  The same thing happened after the cavalry combat which stopped them from sweeping onto the guns.  The artillery fire that subsequently caught them did not do enough to destroy them.  In other words, the combination of the characteristics awarded you on the tables and adequate dice rolling enabled them to survive.

With Black Powder things get very bloody very quickly and there are small peculiarities like this that will crop up.  But they are a 'gentleman's' rule set and an agreement between players - effectively house rules - can be introduced to any game to cover any such issue.  Its the spirit in which all games should be played IMO!

Also on the left flank the Mutineers managed to occupy and hold a building for the entire game in spite of point blank pounding by artillery and rifle fire.  As I only had a small unit of skirmishers (8 figures) there was no point in assaulting the rebel sepoys in the building.  Troops in hard cover get the full benefit of it in BP - as is the case in reality you need at least twice as many troops to successfully assault and winkle out enemy troops from buildings etc. 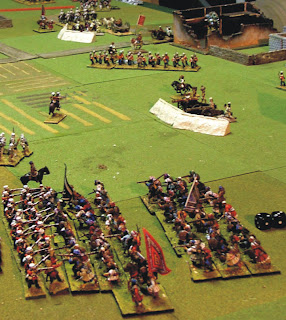 The British right ground to a complete halt - the Mutineers had reinforcements arriving at various points throughout the game (although they had to dice to bring them on) and repeated charges by overwhelming numbers took their toll on the valiant (and stubborn) Scots and their Sikh allies (who also have 'ferocious charge' - but never got to make one!) and after artillery fire and a prolonged hand-to-hand in the centre, the second British brigade also became 'blown' - game over!

For the first time there were no 'blunders' (2 dice @ six)  rolled on command!  As uncanny as the saving throws on casualties rolled by the Mutineers throughout the game!
It was a hugely enjoyable and each one has shown you get stuck in and get a result (albeit not always the one you want!) within a few hours.

The rest of the pics of this and other battles are on our Black Powder site URL.  Feel free to join our little group - we have several international members already!

Hope you enjoyed the post - as before please feel free to leave comment and/or rate this post and all the above pics can be viewed at their maximum size by clicking on them.