More Russians and the start of an Ottoman (and Mameluke) army

Well its been a while and before January is over and done I thought I'd better put together my 'monthly' post (bi-monthly more likely).  Unfortunately I couldn't make Cancon this year with other commitments so can't say how it went or any of the usual goss - first year in some time where I haven't been involved in a demo game of some sort. Felt both strangely liberating and somewhat unfulfilling at the same time. Its not that I haven't been busy with the collection since the last post in early December - far from it - but I have had to get a grip on my collecting mania as I have more figures to paint and finish than years left to draw breath!  I have (for the very first time) actually had the money AND the time to get most of what I've wanted. I haven't been completely rash about it as I've sold off several entire armies including my entire 20mm collection in the process which has largely paid for my new purchases but nevertheless they went for considerably less than the market price (although that is a fickle thing if there ever was).  Still, for a good cause - to help out a mate who had lost his entire collection in the Canberra fires to rebuild.  And it gave me a good excuse to collect the figures I really wanted.

Amongst those of course are my Perry's Napoleonic Russians. I have finally finished most of them - just one regiment of Dragoons to go.  I now have a brigade of Cossacks plus a regiment of Uhlans and a battery of horse artillery. To go with them I now have a five battalion/regiment (4 x line, 1 x jaeger @ 24 figures each) infantry brigade and a grenadier brigade of 2 batt. plus 1 of jaeger. There is a battery of foot artillery (6 x guns) to go with them. This is (or will be once the dragoons are done) a perfect wargaming army.  A bit on the small side true BUT they can also go with my much larger Austrian army of three infantry (2 x line 1 x Reserve) and two cavalry brigades. But there's also a lot more to do to finish off all the Austrians. 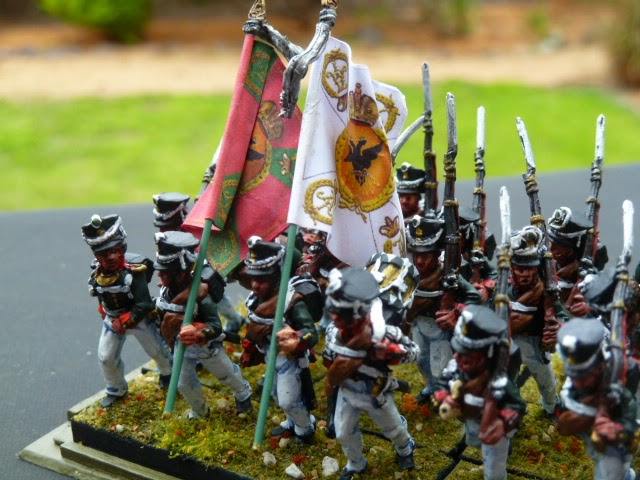 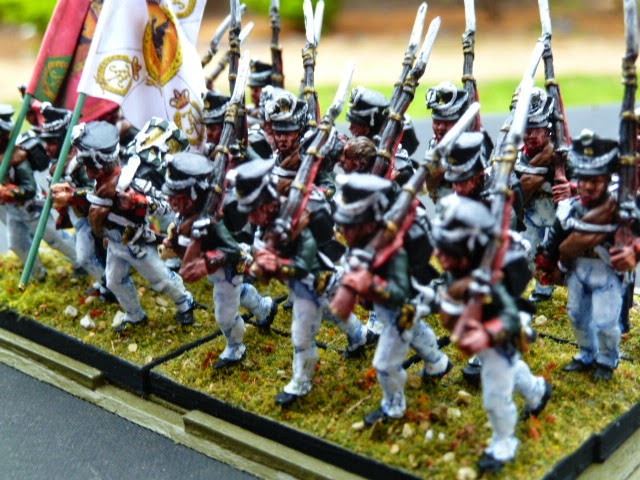 Above, the line infantry of the Narva Regiment and below the Jaeger in the same brigade in Bagration's army. All Perrys of course. 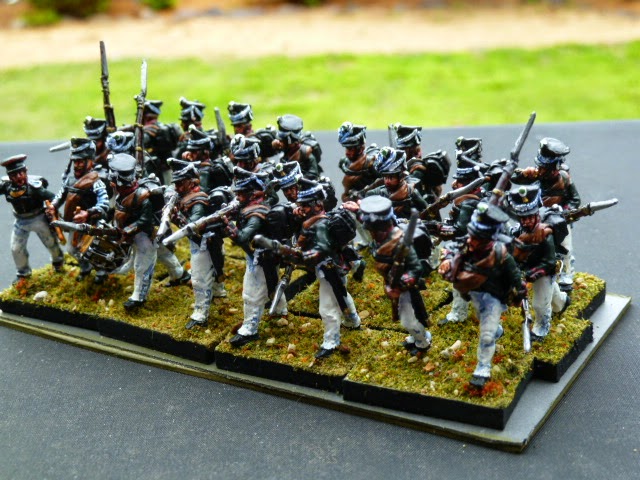 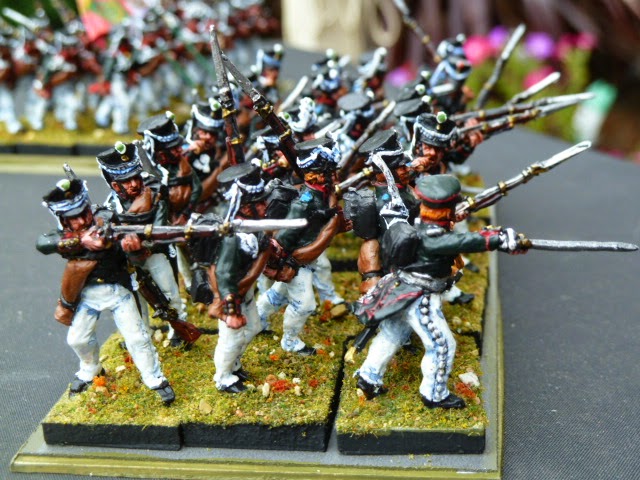 Also got a number of mounted officers and the pick of the litter is the grenadier Colonel on his rearing horse - as good in its way as the famous Front Rank commanders (I have both Bagration and Archduke Charles on their rearing horses). A very finely featured and animated figure he is. 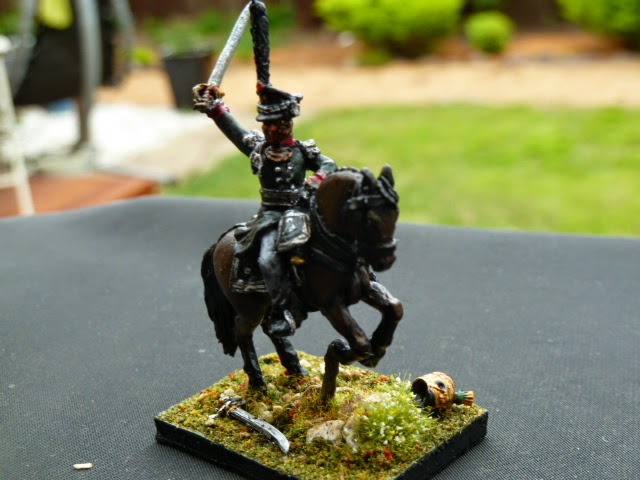 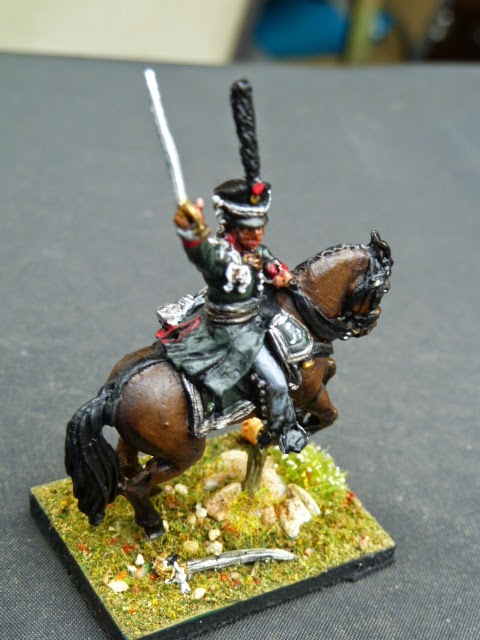 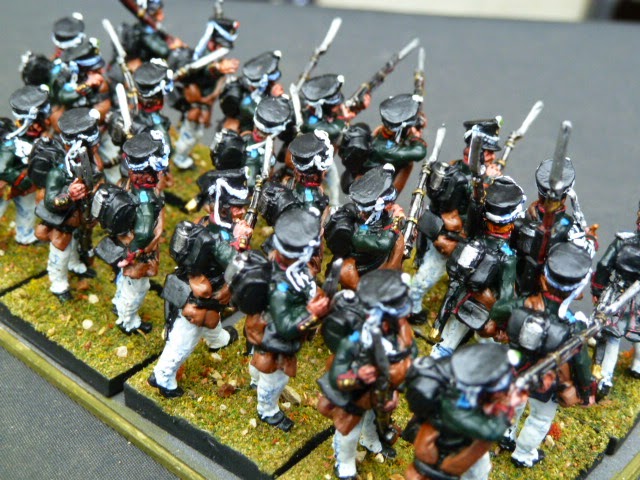 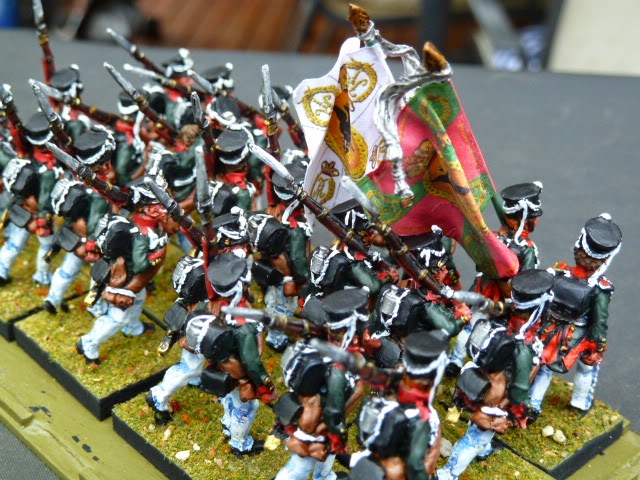 Apart from the Herculean task of organising Christmas at my place for the family AND very hectic work in between I have been finishing off collecting my Napoleonics.  In this Perry's tempted me beyond restraint with their new line of Bavarians. After much deliberation I finally caved and bought enough to fit out my Bavarian brigade.  Unfortunately/fortunately I have an artillery battery otherwise I'd have got the guns, crews and multitude of caissons etc as well.  The latter are particularly good, with a range as extensive as that of the Austrians - at some future date I can see myself having to get me some...  but not for now Josephine!  As it is I now have 80+ Bavarians to paint up as well. I also have another brigade of French to do as well. You see what I mean about getting a grip on the collecting mania? Look - it's an addiction OK? I said I'll handle it - right? [palms head]  But that's not the worst of it. Not by a long chalk. What Doc also did over Christmas/New Year was to buy an entire Napoleonic Mameluke/Ottoman army. Mostly unpainted of course.  Totally crazy of course.  Madness in fact.  Hundreds more figures to paint. Clearly I did not have enough already!

So I started on the ones that came sort-of painted (and based, but not the greatest paint job).  I now have a full orta of Cairo Janissaries, another of turbaned (Cairo?) archers under command of a mounted Turk Janissary officer and what appear to be either Ottoman Akinji light cav or some other (Dixon figures). The latter were beautifully painted, just needed a clean up and re-basing. I'm now in the process of doing up ten Old Glory Mamelukes. Crappy figures but will come up a treat with new paint etc.  That just leaves 28 Brigade Games Mamelukes (magnificent figures) 20 armoured Spahi and 20 Akinji light cav plus two ortas (@ 30 & 28 figures each) of Janissaries and Nizam plus artillery crews (also currently in hand) - so still some 80 cav and over 100 foot to paint. What a project! 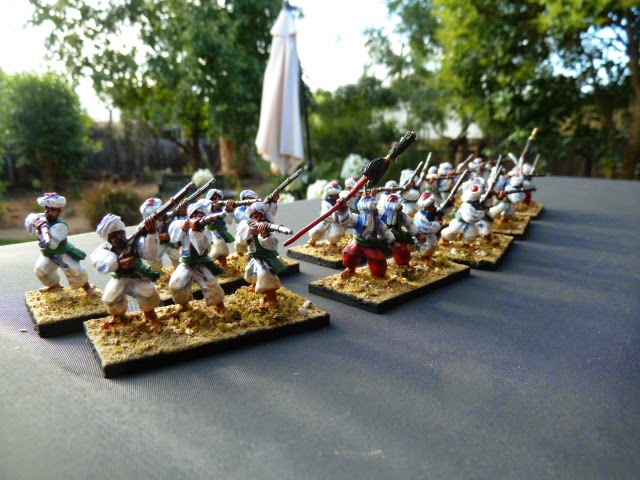 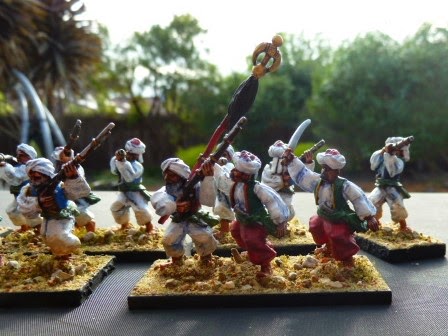 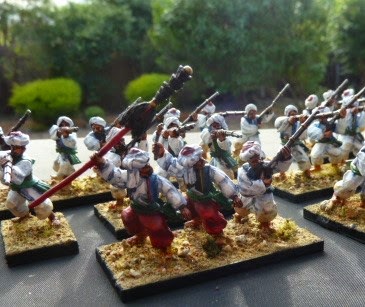