I have recovered (almost) from my little tumble and have been somewhat busy in the yard to make amends for my enforced put-yer-buggered-foot-up (you old fool) shenanigans. I've commissioned an ex (or perhaps not so ex) bikey cum tree surgeon to cull my Amazon-in-the-backyard and turn it into a savannah like setting in time for summer.  Old mate's done a pretty good job and I've also slaved away too hauling truckloads of vegetation outta the place. All of which hasn't left as much time as I'd like to finish up my Russian army.  Nonetheless since last posting I've managed to paint up no less than 64 Russian infantry to an acceptable standard, with another 24 half done and 24 more 'prepped and ready to go. Reasonable effort in the circumstances. That gives me (finished) 3 x regiments (or battalions of 24 figures) of line, two of grenadiers and one 16-figure battalion of Jaeger. The one half-done will give me a full brigade of line when they're finished. Most satisfying! Nearly half my Austro-Russian army now completed. A regiment of dragoons, one of jaeger and two of line? grenadiers? will finish it up.  I have a few nice mounted Perry's officers to go with them too.  As command figures I plan to lavish a bit more attention on them. 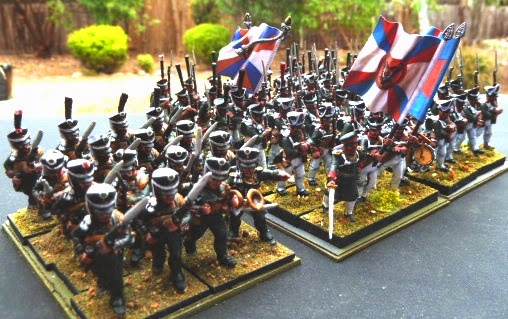 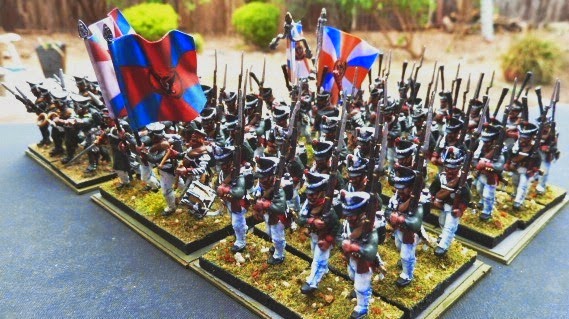 The figures are a mixture of Front Rank (the Jaeger) Warlord and Perry. The FR Jaegers are a bit Tellytubby-ish in comparison but are still a very nice figure - and all are 28mm so within a mil or two of each other size-wise.  The Jaeger are resurrected figures with a new, proper paint-job and basing. The Jaeger's green uniform was so dark it was almost black at a distance according to authoritative sources. I've given them the matching green trousers as well rather than the summer whites as it more befits their skulking, scurrying and shooting role as the Russian army's outnumbered skirmishers! 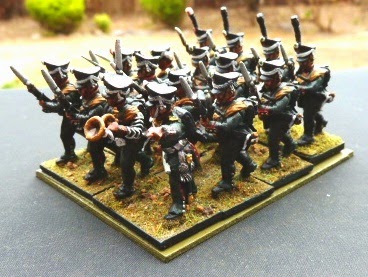 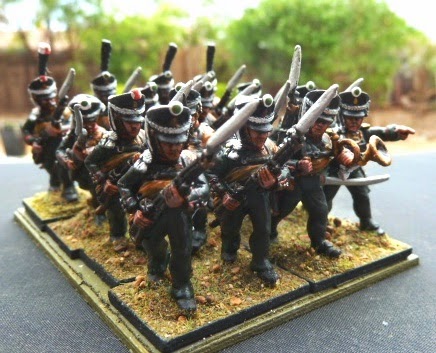 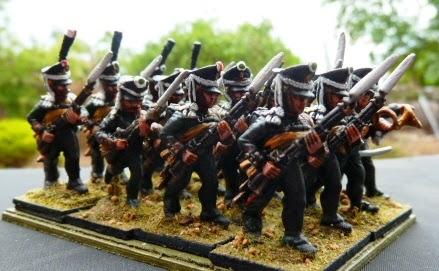 The Warlord box was the one with the metal command stand that contains those very useful cords and tassels for the standards.  The plastics are OK - reasonable detail and poses (well, they are all marching aren't they?) but the command are less... er, OK?  They are all in marching poses (drummer and bearers) save for the officer who seems to be having some kind of a fit with sword in hand. Doesn't really go with the rest but could have if he wasn't looking at the ground while he's waving his sword about!  Dunno what the sculptor was thinking there.  Nonetheless done up together with the bits of annoying flash cleaned off (not the greatest metal casts) they look quite reasonable as a command stand. 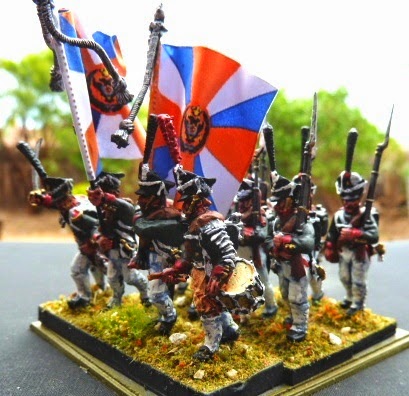 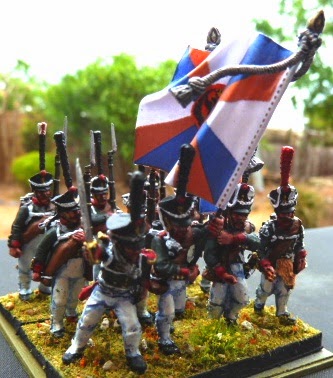 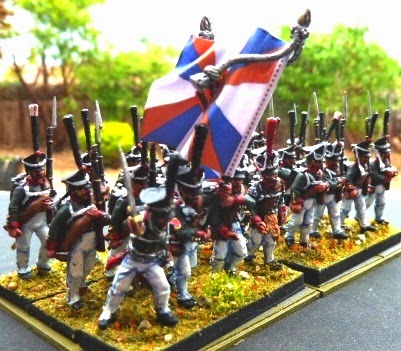 As you can see I've done them up as the Ekaterinoslav Grenadiers who were brigaded with the Pavlovs (my other Front Rank unit). I like the flag cords which you can bend into whatever shape. They fit very neatly onto some copper rod flag poles.  If only that officer didn't have his head at such an odd angle it'd all work! Still, a decent 'regiment' in a box for under $40 so shan't complain. 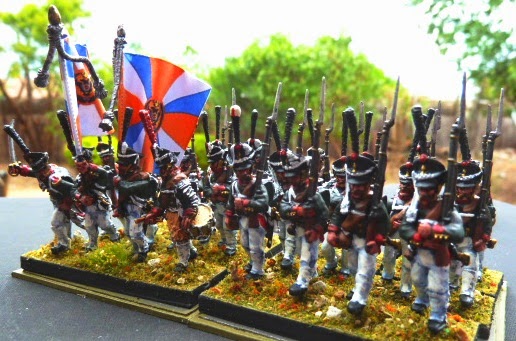 The last lot are the Perry's plastic Russians. Very nice figures as you'd expect and very clean casting - virtually no annoying flash to clean up. Gotta hand it to Rendera - their molds are some of the best there is in the biz. Have a look at the Perry's Facebook page to see the step-by-step process of doing the latest knights in HD plastic shown in short videos. Real craftsmen at work. Amazing stuff. 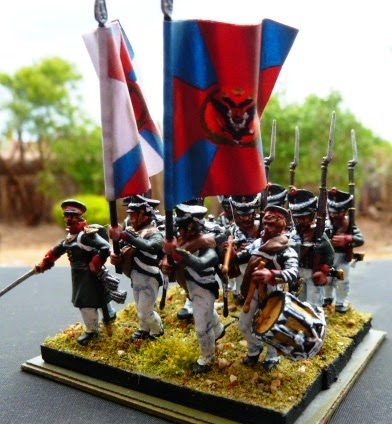 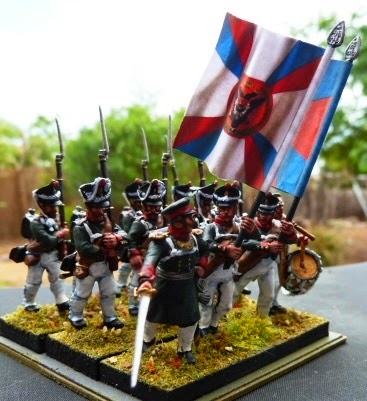 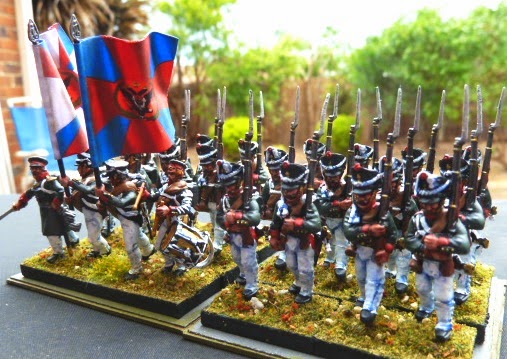 I've made them up as the Narva Regiment in Bagration's 2nd Army.  They were part of Raevsky's 7th Corp defending the Redoubt at Borodino I think. Stout lads all!  Apologies for the photography - its a bit overcast and about to bucket down outside.  The clouds make it very glary without enough light to show the details on the figures - too much contrast. At least its a good rendition of the colours which (I hope) are pretty close to what they would have been historically. 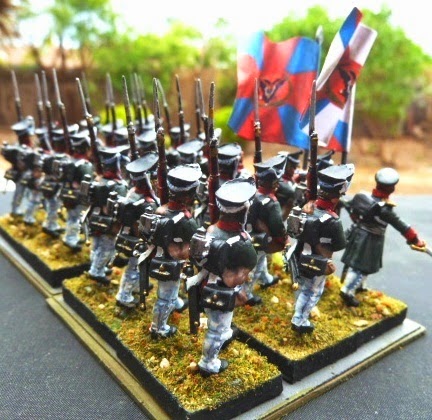 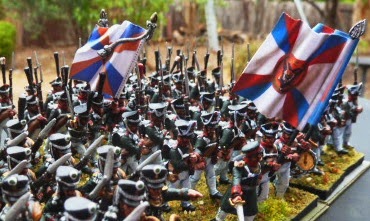 That's it for now.  As I alluded to in a previous post, I could not resist getting some of the Perry's new Bavarians. Once the last Russians are done I'll have to get stuck into them but I doubt I'll get much done before Christmas is upon us once more.  I also have a squad of WWII German Fallschirmjaeger motorcycle combos to do, and some Panzers, which I am trying to resist but, as we all know, resistance is useless!

Who knows, I may even get a game in too.