A week or two ago I received two more of Paul Hick's beautiful Napoleonic Poles from Roger at 'Murrowski Miniatures'. These were the mounted general and his ADC - perfect for my brigade commander (and his ADC).  After finishing off my German para company I couldn't wait to paint them up. I also decided to do something a bit special with the basing to create a little Polish command vignette.  Ironically I had an MDF tea coaster that I'd cut down as a base for my 17thC Polish Commonwealth commander and escort (also mounted figures) which was both large enough and available as I have since re-based my TYW Polish commander. 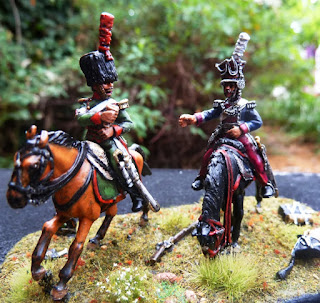 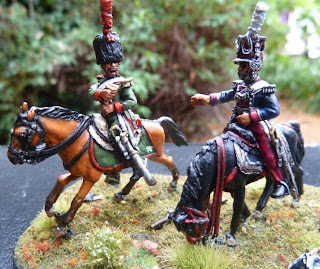 I based the General's uniform loosely on that worn by Poniatowski, using a copy of a Belange print as a guide.  I've given him the almost purple (Carmin red?) trousers and tunic front, with everything edged in silver of course.  The horse leather is red, favoured by aristocratic Poles - probably the only one's who could afford it! 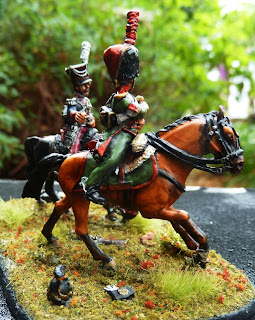 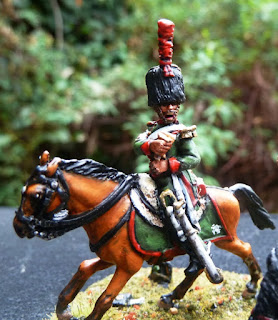 His ADC's uniform was a bit more problematic as the only authentic references to Polish ADC uniforms I could find were those attached to Poniatowski and all wore a hussar uniform with shako.  Fortunately there was no regulation and each commander could pretty well dress his staff to his own taste, so room for a wide variety.  A more junior rankede general like a brigade commander may well have a junior officer assigned to him, usually from one of the cavalry regiments.  In this case I think it looks like one of the elite Polish chasseur regiments.  I note he has his brevet rank appointment on his left arm (at least I think that's what it is!) 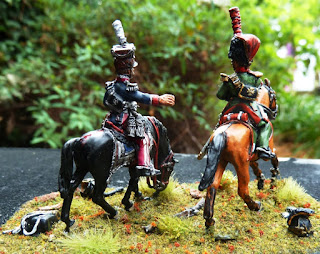 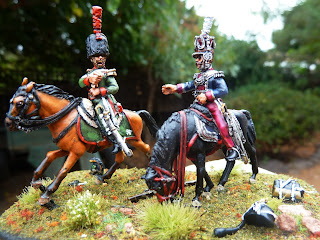 The general's grazing horse is a particularly nice pose you don't see that often so I've given him a nice tussock of grass to munch on!  I've chosen specific bits of battlefield detritus sprinkled across the base.  There's an Austrian leather helmet, a Russian grenadiers shako, backpack, cartridge box and musket.  The grenadier shako came off a plastic Warlord Russian head, with a chin-strap added and hollowed out a bit.  Gotta love those plastic bits and pieces!  Getting a very useful collection of them for all sorts of things - from a German Fallschirmjaeger armoured car commander to a Russian shako or an old musket - there are never-ending uses to be found with my plastic bits and pieces box. 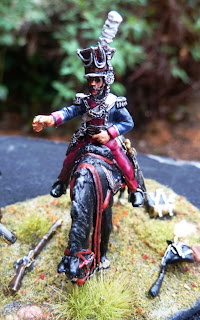 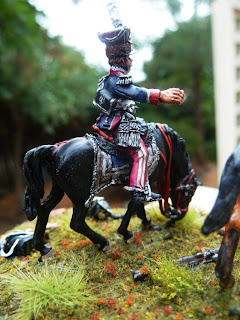 The general is a superb figure, with exquisite detailing.  Unfortunately the horse's saddle cloth does not have the detail on one side but it's nothing that a lick of paint couldn't fix! Nonetheless these figures were a joy to paint - I must get on with finishing the rest of the brigade including the artillery battery.