I know it sounds a bit like an Italian espresso coffee machine but its actually an armoured car.  The Italian's tanks may have been crap but some of their armoured vehicles were not and among the best of them (maybe  equipped with an espresso!) and used exclusively by the Germans during the war - was the four wheeled Autoblinda AB 43.   The crazy-quilt camouflage pattern was a bit of a painting challenge but I quite liked the end result.  Its an Italeri model at 1:48 scale - or so the box tells me (looks a tad on the smaller side of 1:48 to me - more like 1:56!)  It had also sat on my shelf for a long time so that after the relative success of making my Hanomag kit, I decided to give the Autoblinda a go. 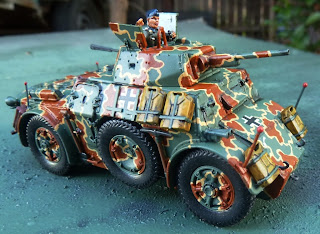 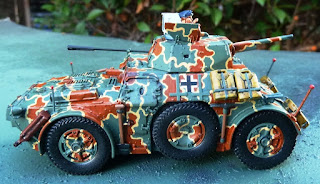 It was also an expensive little sod at nearly $28 AUS (or $29 US!) but a beautifully made little model that was nonetheless relatively easy to put together.  The model is hard HD plastic with a metal chassis frame that screws in to the plastic hull.  It actually fits together really well - nearly as good as the Tamiya Hanomag - so its a quality model which at the end of the day is what you are paying for. 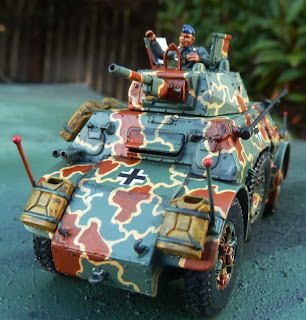 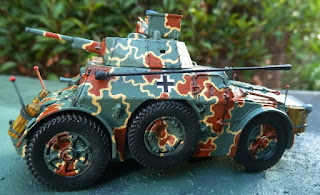 The reason I bought it was the fact I wanted some unique armour for my German paras and this was one they operated exclusively in the Mediterranean theatre.  A bit too late for my Crete Op MERCURE Fallschirmjaeger company but a really nice bit of kit nonetheless.  It was a fiddly bloody thing to build though - every hook, bolt, aerial and minute thingamebob had to be glued on.  Much bad language ensued at times but it is an amazingly detailed model. 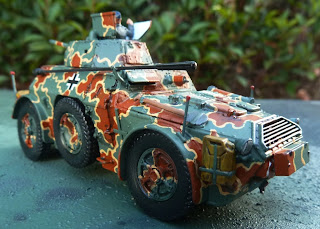 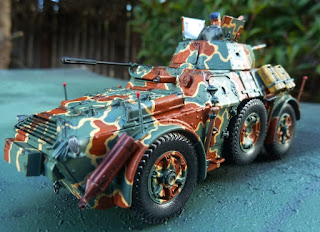 The Autoblinda mounted two machine guns (one in the turret and the other rearward facing) and a 20mm Breda 35 gun.  By the time they were ready to roll off the production line in late 1943 the Germans had taken over all the Italian armaments industry and distributed the Autoblinda to their units in the north of Italy.  The Autoblinda I've made belongs to the 4th Fallschirmjaeger Division based in Florence in August 1944, at which time they were mainly used in policing and anti-partisan operations.  The only thing I have added to the model is a Fallschirmjaeger NCO in fliegermutze as the car commander.  I made him from a small 25mm (large 20mm) plastic German, slicing and dicing to get the pose I wanted that fit in the open hatch turret. 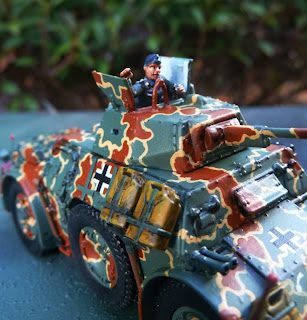 In addition to the Autoblinda  I also finished off my para company with my Kettenkrad scouting unit, anti-tank gun and a few other odds and sods.  Most are Bolt Action figures and very nice when made up but I have to say the Kettenkrad (the German halftrack motorcycle thingys) were an absolute pain to put together.  Do you think I could make the handlebars stay in place or fit the riders into their slot in front without major surgery?  Still, once based up they look great and just the thing for any forthcoming Crete campaign action. 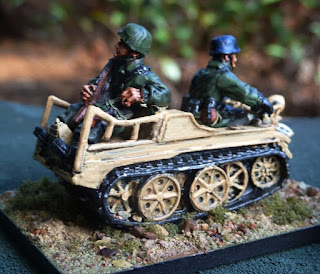 Robust machines, the Kettenkrad could go just about anywhere (although not quietly I'm thinking!) which made them useful scout vehicles but they also had enough grunt to tow anti-tank guns etc.  Dunno if I'd like to be a passenger on one, facing the wrong way and so blissfully unaware of what you could be riding into! 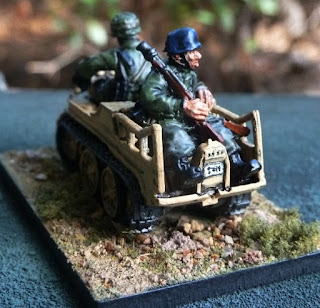 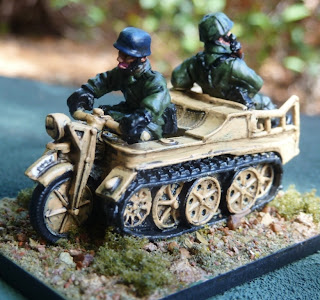 One of the specialty figures I got was one of the feared Flamenwerfer.  I was impressed with it's deadly performance in our Corinth Canal re-fight and thought at the time 'I gotta get me one of those!' 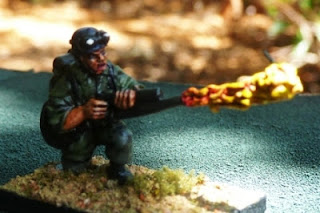 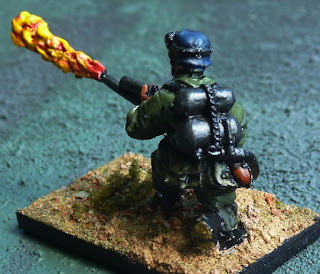 The Warlord Bolt Action figure is a particularly nice one and came with another nice squatting sniper one. I've got him squatting behind a rock, something I'm sure many paras did during the Crete campaign! I used a piece of cork for my rocky outcrop. 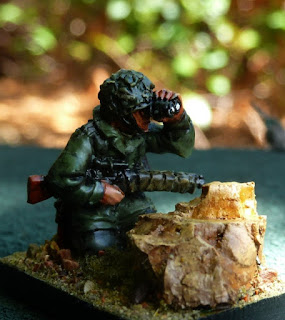 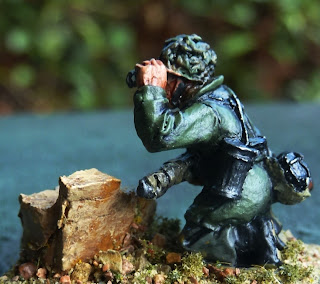 I also picked up the paras-with-captured-weapons set and got a couple of useful figures out of it, including a chappie with a captured Sten hurling potato-masher grenades - I've given him a few more to hurl as well!  The other one is standing firing an automatic rifle of some sort.  Again, nice figure and rounds out one of my two jaeger platoons. 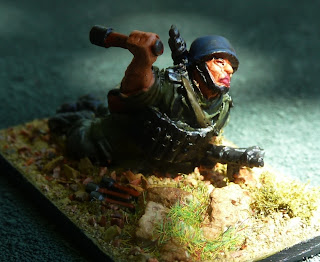 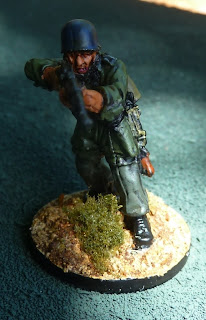 Last but not least is my anti-tank gun and crew.  Its the paras 2.8cm squeezebore gun and a very nice little model with figures actually looking like they are properly handling the gun, with the Gefrieter in charge watching the result through binoculars.  Again a nice little unit that rounds out my HQ Support (Heavy Weapons) Section. 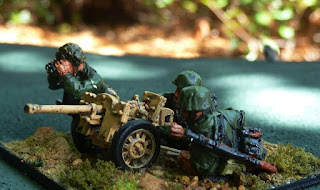 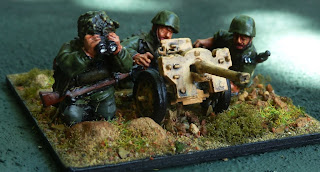 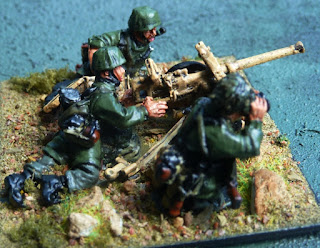 Well, that should be the last of my German paras done.  Next on the acquisition list is the same in Gebirgsjaeger (Mountain Troops) which are a little more problematic as I've only just found someone who makes reasonable figures, although I'm informed by our Warlord agent that Bolt Action will be bringing some out later this year.  That and a 1:72nd scale JU52 tri-motor transport will finish my little army ready for our Crete campaign later this year. The next lot to be painted up will probably be Napoleonic - I'm thinking the Polish general and ADC for starters.  But we'll see - there's 'undreds of the buggers awaiting my attention with the brush!