I was trying to finish off the Prussians - inching towards that goal incrementally - more by millimetres than inches!   But I recently discovered that I had in fact run out of space to store them.  The only solution (acceptable to the Minister of War & Finances, She-Who-Must-Be-Obeyed) was to get rid of a few figures.  They're all my 'children' - how can you get rid of one lot over another? Shouldn't all children be loved equally? 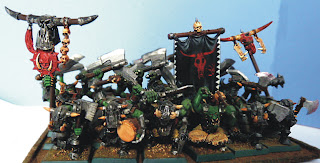 The answer to this dilemma was the most obvious - those I haven't touched in years - should be the first to be considered.  I started with all the old Warhammer/fantasy armies I collected and painted up for my sons over the years.  Two of them - the Undead and the Orcs - I literally hadn't touched in nearly a decade!  But first I had to see what I had and fix up any bits that needed fixing.  I also had to ask the permission of the boys who I collected the armies for in the first place.  The owner of the Orcs was unfazed - he hadn't been interested in 10 years and wouldn't be again any time soon - more interested in any money I could get for them! 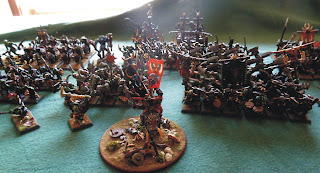 The 'owner' of the Undead took a quite different view.  He chucked a wobbly over it.  No matter that I hadn't even gotten to the point of actually cataloguing what I had (and no, he wouldn't have a clue either - he also hadn't touched them in over ten years!)  The end of the tale was that after listing them all and fixing them up, back they went into the boxes to gather dust for another decade.  Ironically its touching that he actually appreciated what I did for him all those years ago, whereas the other two who didn't kick up a fuss, couldn't give a monkey's about the figures.  Funny old world innit? 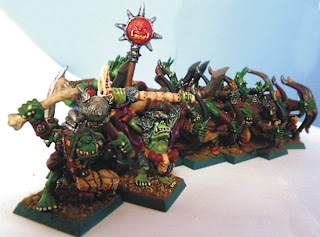 Orc Shaman an' some Orc Arraboyz

Meanwhile, I've recorded what I've got - and mighty proud of the painting effort, given my relative lack of experience at the time.  So I thought I'd post the pics of them at least.  The Orcs will soon be going on Ebay (unless anyone viewing this blog wants to make a generous offer!) but the Undead will have to moulder in their undead-ness (in my garage) for another eon or two... [sigh] 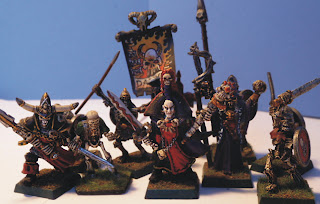 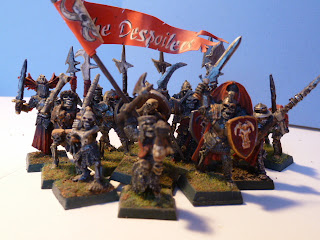 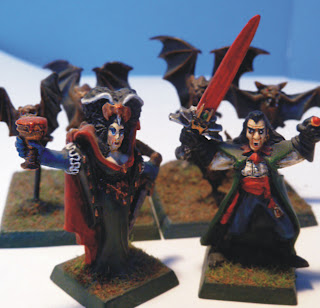 Vampire Lords & their batswarms - amongst the first figures I ever painted! 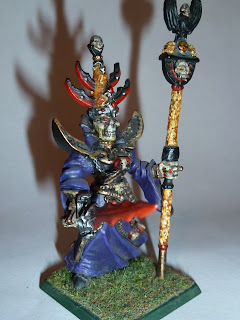 Nagash - the Undead Lord - unfortunately no longer part of the Undead
- but a nice collector's item you'd think! 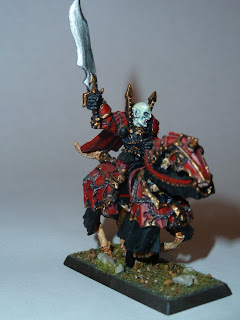 One of the figures I'm most proud of - a mounted Vampire Lord.
Took a bit of trial & error but I finally got the ghastly flesh-tone right!
One of GW's best figures IMO. 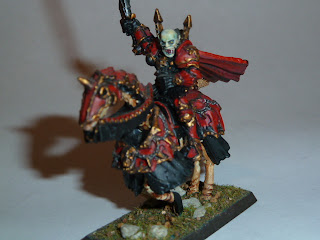 One of the first vignettes I ever attempted was that for the Orc general who I think went by the name of Morgrimm Necksnapper!  Went to town adding gruesome bits and pieces of slain opponents from a 'deboned' Brettonian Knight (well, the head and spine anyway!) and a cleaved dwarf with a splitting headache!  It'll be part of the Orc army that's for sale (if I can sell it that is!) 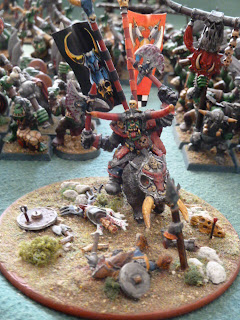 Amongst the other Orcs up for grabs will be the ghastly Nightgoblins.  I particularly like their shaman with his magic mushrooms and the hilarious goblin beserkers.  The latter operate kind of like whirling dervishes - with wrecking balls.  Once let loose their trajectory is determined by the dice and they literally blast through anything in their rather erratic path - friend or foe. 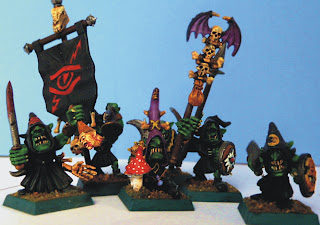 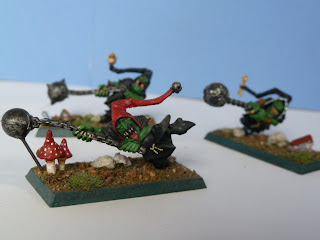 Last but not least is one of the original Orc catapults - rocklobbas - just picked them up in bits and pieces at the trade stands at various cons and put them all together.  A rather special crew, one of whom is rather rude orc mooning his intended targets while his grinning companion looks on. 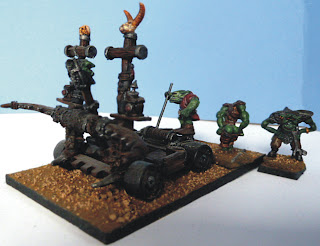 There is a lot more but I think that's enough for me for the time being - gotta finish those damned Prussians!

If anyone is interested in an Orc army in all its gruesome green orkiness - leave a comment or send an email to: wonchangers@gmail.com

Email ThisBlogThis!Share to TwitterShare to FacebookShare to Pinterest
Labels: Fantasy