Kokoda - the non-action at Fela?

Unfortunately I couldn't make the game last weekend due to unforeseen (by me it seems) family commitments.  The scenario had a small PIB unit virtually surrounded by Japs coming from possibly three directions and cutting us off from our base in Isurava with other Allied forces led by Doug and Ian coming to the rescue US cavalry-style.  I'm reliably informed it didn't quite go that way.

I dunno how it went other than the Japs got what they were after (whatever that was) and withdrew.  I think we may have lost a section but otherwise were able to withdraw back to Isurava.  Not a lot of action it seems.

Nonetheless my wargaming pal and redoubtable Jap commander Greg sent some of his beautifully Photoshopped pictures of what action there was - from a Japanese perspective of course.  One shot appears to be of Andrew's Aircobra - implying we (the Allies) may have had some air cover?  Wonders never cease as 'Dugout Doug' MacArthur had only recently withdrawn all combat aircraft to the Australian mainland - just in time for us to make the forlorn assault to retake Kokoda (yeh, right!) 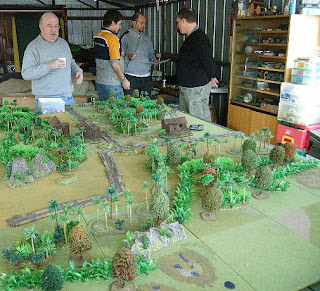 The table set-up with Allied commanders deep in conference with game umpire Andrew - where are those bloody Japs?
[Note all photos in this post are by Greg Blake] 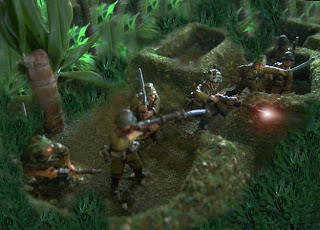 Oh, there they are! 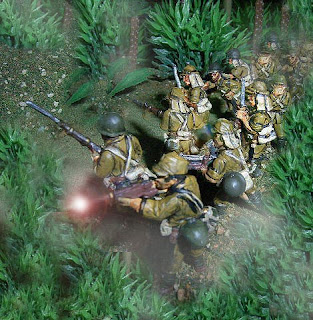 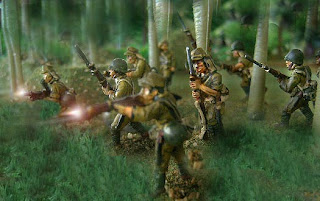 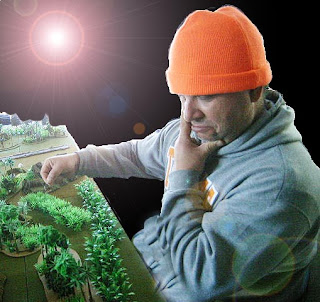 (Jap commander) Big George picks his nose... er, sorry contemplates his patch of jungle and realises just how bloody annoying those (Jap) starshells can be! 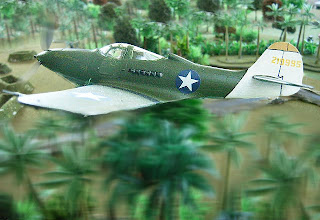 A much-vaunted Aircobra makes a tree-top run - hope he plastered some of those Japs with cannon-fire or dropped his bloody great 500 pounder bomb right on top of 'em! (although fat chance of that unless Ian was flying it!)

The next game promises to be more of a real battle as it'll be the campaign-turning battles at either Isurava or Milne Bay - the latter of course being the first serious Japanese defeat of WWII.  As it was achieved by the Australians and as his Marines were in pretty dire straights in Guadalcanal at the time, MacArthur ensured that we got none of the publicity and little of the kudos such a victory would have otherwise received (had it been by the Americans).  It remained that way for 50 years as few war histories - and virtually no American histories of the war in the Pacific and even of the Papuan campaign mentioned it or accorded it any significance.  But of course with our wargaming, if the Allies loose either battle it could be the end of the campaign - so big stakes at play for us!

The following is totally unrelated to the above but is a link to the Angry Lurker's blog, which has recently achieved some dizzying heights in blogdom with now over 800 followers.  As Mr Lurker is also a fine deranged wargaming enthusiast like the rest of us, I thought I'd make a link to his site and give it a plug.  He's a zombie movie affectionado too, which further commends him to us!

The Angry Lurker: 800 Followers and the One.

Definitely a quality blog.  Mr Lurker produces great wargaming figures, movie reviews and as a bonus, the most tasteful shots of a pneumatically-endowed lady or two.

So be a lurker at Angry's blog - you won't regret it!