As the shattered survivors of the 39th retreat back up the Kokoda track, we have a little surprise for our Japanese friends.

Basically the Allies made pretty good use of air cover for ground support, whereas from what I've read of the campaign, the Japanese generally didn't.  A big mistake for them as the Jap planes like the Zero were superior to most of the Allied planes available at the time. 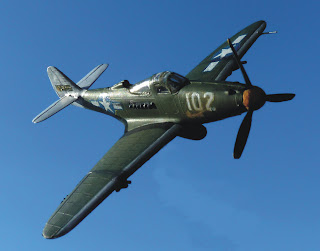 Flying out of Port Moresby was the US Army's 8th Pursuit Group which initially consisted of about 26 P39 Bell Aircobras (out of over 40 originally sent - there were a lot of accidents!)  These planes were no good for dogfighting above 10,000 feet - completely outclassed by the faster and more maneuverable Zeros - but they packed a huge wallop in armament AND were hard to shoot down as they were armoured!  They had 4 x 30 Cals in the wings, 2 x 50 Cals mounted above the nose and in the nose a 37mm cannon!  They made a great ground attack aircraft that could also readily defend themselves at lower altitude. 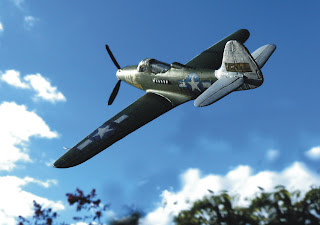 They had a very short range which they extended with a drop tank but lost the tank when carrying a 500 lb bomb!  Must have been very vulnerable trundling over the Owen Stanleys with a full load of fuel etc - you have to get up to nearly 20,000 feet just to avoid flying into the mountains in Papua!  But the Japanese were too far away in Rabaul to intercept as a result the Aircobras really got stuck into the Japs on the ground on the northern Papuan coast and foothills around Kokoda. There were a few Aircobra aces too - they could readily take care of themselves at lower altitudes.

I found an old 1/72nd scale Airfix model I made as a teenager that required a bit of repair - part of the tail-plane comes from a model French Dewotine fighter - and new paint (I had to hand paint all the decals - the old ones were disintegrating with age!) to make it one of the 8th FPG out of Moresby.  Also made up a stand & its now ready for the next phase of our Kokoda campaign! 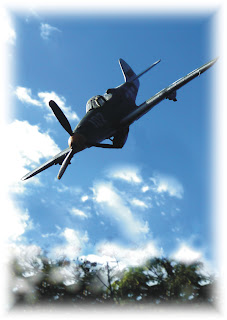 The last thing the Japanese will see as it comes skimming over the jungle top guns blazing!
The next post will be of the next phase of the Kokoda battle - ambush at Deniki. Stay tuned for more Kokoda action!
Cheers,
Doc
Posted by Doc Smith at 9:10 AM

Email ThisBlogThis!Share to TwitterShare to FacebookShare to Pinterest
Labels: WWII