Well, after the latest Kokoda clash it was time to pay my dues (for my bodyweight in FPW Prussian lead!) by finishing the painting of the Sikh Wars Sikh cavalry for my lead-pimp Doug.  These are some early Perry sculpts for Foundry, or so I am reliably informed.  And lovely figures they are too. 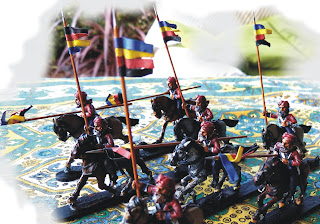 They are still on their painting sticks as Doug prefers to base them - he has his own 'Punjab' mix of flocking ( a very desert-y looking mix with flecks of green) so he can flocking-well do it himself!  Besides, saves me another job, right? 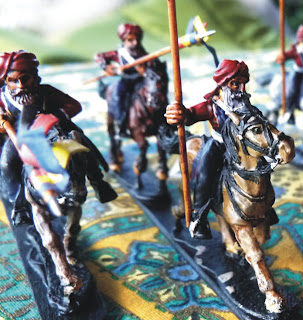 I got some very good brass lances from the lance-guy (Dean @ Olympian Games) - just like the real thing and sharp too.  Got jabbed numerous times - aggressive little buggers those Sikhs!  I tried to replicate the unusual lance pennants which are basically four different coloured flat ribbons tied on the end. - sort of turned out alright but not 100% accurate in my opinion.

These are still very nice figures although they appear in only two basic poses - lances upright or couched.  Probably prefer the latter - but that might only be because the others kept on stabbing me! 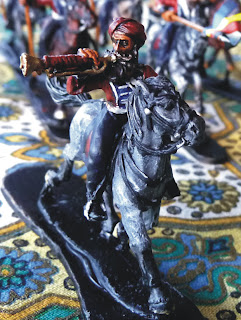 One of my favourites is the trumpeter - must have been a bugger of a job blowing 'is horn with all that luxuriant facial hair! 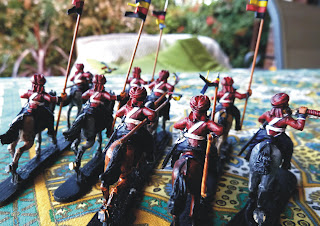 The lancers from the rear - AFTER they've ridden over and jabbed you.  Very British style uniforms must have saved the Commissary a few bob when they eventually joined Her Majesty's Imperial force after they were defeated! 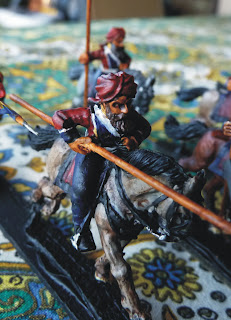 Just a few more Ghorchurras (irregular cavalry) to paint up and then get stuck into the Prussians again before the next Kokoda battle.  Have also managed to put together another gaming table out of old doors - 2.75 x 1.67 meter board that fits nicely on the old table-tennis table but can be readily broken down and packed away.  Have to see if I can fit it in the old lounge room (much to the horror of She-Who-Must-Be-Obeyed!)  If all goes well, a few games at home may be on the cards.