Taking a break from painting up my Bavarians (and domestic duties various!) just had a great Bolt Action game at Jolt Games in Mitchell so I thought I'd post the AAR and photos of the day.  The scenario for the game was loosely based on Operation LIGHTFOOT, an Allied armoured assault on an entrenched Italian held position in North Africa, devised by Andrew our Bolt Action guru. My mate Paul and Andrew played the Allies and myself the Italians (a nervous first for me).  Given the Italian propensity for morale collapses and running away - two more unit losses than the Allies and you have to test to see who stays and who doesn't - I was rather worried about just how resilient my Eyeties would be under a sustained armoured assault. As you can see from the following photo of the Allied armoured juggernaut waiting to be deployed - I had good cause to worry! 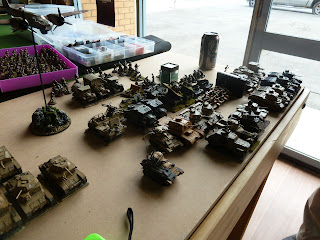 Another attraction of this scenario was the availability of air cover for both sides. I bought 'Doc's Airforce' along with a Blenheim bomber, Hurricane fighter and Gloster as a scout plane for the Allies and a Stuka and a Macchi 'Arrow' fighter for the Italians - each side diced for which plane and when they came on.  Luckily for me I got the Stuka which took at least three turns after I got it before actually coming on to attack, doubly lucky as the Allies did not have their usual Ack Ack - Andrew left the Bofors at home - while the Italians had a 90mm monster mounted on a truck which doubled as either a heavy AA or super-heavy AT gun. Unfortunately for Paul and Andrew they were only able to get a scout plane on at the end of the game (survey the damage I suppose) so I never got a chance to check out the 90's AA capabilities! Not that it mattered, as an AT it is superb - easily as good as an 88 - and had a major affect on the outcome of the game.


The generous tables in Jolt meant that it was also a chance to test out my new desert battle matt - all 12' of it - and given the size of the respective forces, we needed every inch of it! Biggest WWII game - at least as far as armour is concerned - that I've ever been in! The combination of Andrews and my Italian armour gave me a decent force of about five M13/40s, three Semovente AGs (two of them with 75s) and a half dozen L3/35s, one with a 37mm AT gun as well as various scouts - a Lince (as armoured command vehicle) an Autoblinda with a 37mm autocannon (sweet!) and my awesome Sahariana. Together with two full platoons of infantry (3 x sections each) together with two 75mm field guns, 81mm mortars, HMGs and Elefantino AT guns it was quite a large defensive force.

Needless to say my careful preparations still did not prevent first blood to the Allies and my Sahariana brewed up after her crew abandoned her on fire. A British scout (Daimler?) fitted with a Boyes AT gun (i.e. giant rifle) scored a shot on the rapidly reversing Sahariana setting her fuel cans on fire.  I failed the saving roll so the crew, rather than put the damn fire out, abandoned the vehicle.  Oh the shame, the shame!  Personally, I blame that useless sot of an NCO swigging on his vino in the back of the car. Andrew reckons its the first time he's ever seen a Boyes AT rifle set fire to anything in a BA game, let alone knock something out.


The loss of the Sahariana right at the start meant I had nothing to radio in what was coming through the town approaches but for some reason my opponents seemed intent on driving down the gun-barrel straight main road on the right flank.  That would be the one I parked my truck with the 90mm at the other end. The response was swift and just as deadly.

The Allies very nearly drove in my scouts which would have blinded my guns as they were acting as the Forward Observers. Nearly.  Actually the 'Blinda performed magnificently and even if it took half the game to discover it was armed with an auto cannon (two shots instead of one) it gave good account of itself, getting pins on the Honeys and more importantly NOT running away but providing a blocking force of its own that meant the only way out of the town was down the road - where all my ATs were ranged in!  It was down this road that Paul's Vickers light tanks raced - to their doom (brave lads tho)!

As expected the Allied armour poured on in successive waves - so much of it I believed it was only a matter of time before they started to overrun my outer defenses. But that never eventuated as the brave 'Blinda held up the Allied lights in the centre and the awesome 90mm Super Heavy AT gun got into action. The Allies had four Matildas, two Valentines and a Bishop (25pdr on a Valentine chassis - a sort of British KV - and almost impossible to stop with most of the lighter Italian ATs) as well as a Crusader, two Honeys and two Vickers Light tanks and four armoured scouts: Humbers and an ancient Rolls Royce - the later with armour so light it was classified as a truck - mounting a Vickers HMG turret though. Add another two 25pdrs and numerous 2pdr ATs including a portee and there was plenty of fire-power to be unleashed on the Italian defenders. It should have been but much of it never got the chance as an enormous firefight developed in the the centre and the 90mm began to pick off tank after tank as they tried to come down the main road.