Muskets and Tomahawks Along the Ohio: French & Indian Wars action on Day 2 at Cancon 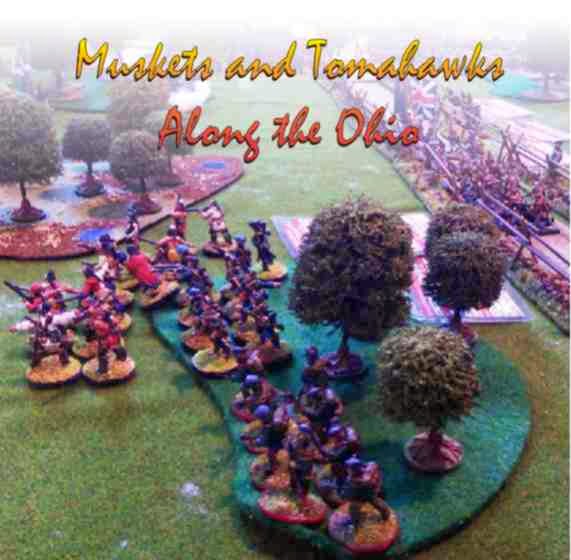 Day 2 at Cancon saw the final battle to take the French outpost, the last scenario of 'Muskets and Tomahawks Along the Ohio'. I was joined by John and Cameron to help command the French while Doug had another four guest British commanders. The French had narrowly lost the first encounter which saw the village of their Indian allies destroyed and over three quarters of the Huron wiped out.  The second battle involved the British force going overland through the only road across the Ohio wilderness and the French and their remaining Huron allies trying to stop them.  Although they inflicted heavy losses, particularly on the Rangers and the Mohawk British Indian allies, the French were heavily defeated and the remaining Huron wiped out. For the final scenario the French (regulars - Marines, Ligne and irregular Correurs de Bois) had to defend their outpost on the Ohio river (complete with fort and docks) from a two-pronged British attack, one force coming overland down the wilderness road and a riverine force led by Her Majesty's Brig 'The Walsh'. 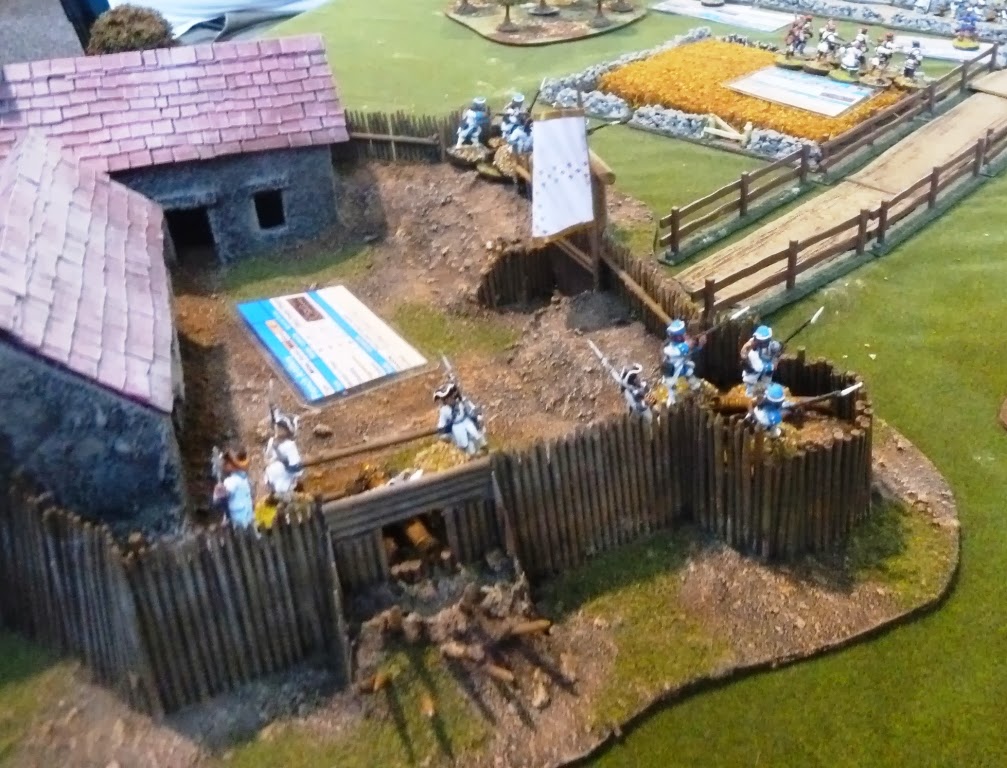 There were several determining factors in the final scenario, most of which involved the artillery of both sides.  For the French the fort's guns, although very slow to reload they provided crucial support for the hard-pressed infantry when they needed it. One hit in particular had a major affect on the British attack on the town. On the British side their brig had no less than six guns of which she could bring three to bear at any one time PLUS the artillery battery which included two howitzers. The British tried to bombard the fort and take out the French guns but apart from silencing one for a few turns by killing half the crew, they were unsuccessful. They did, however, manage to fire on and destroy half the town - hitting every building but the one that hid the best French troops! 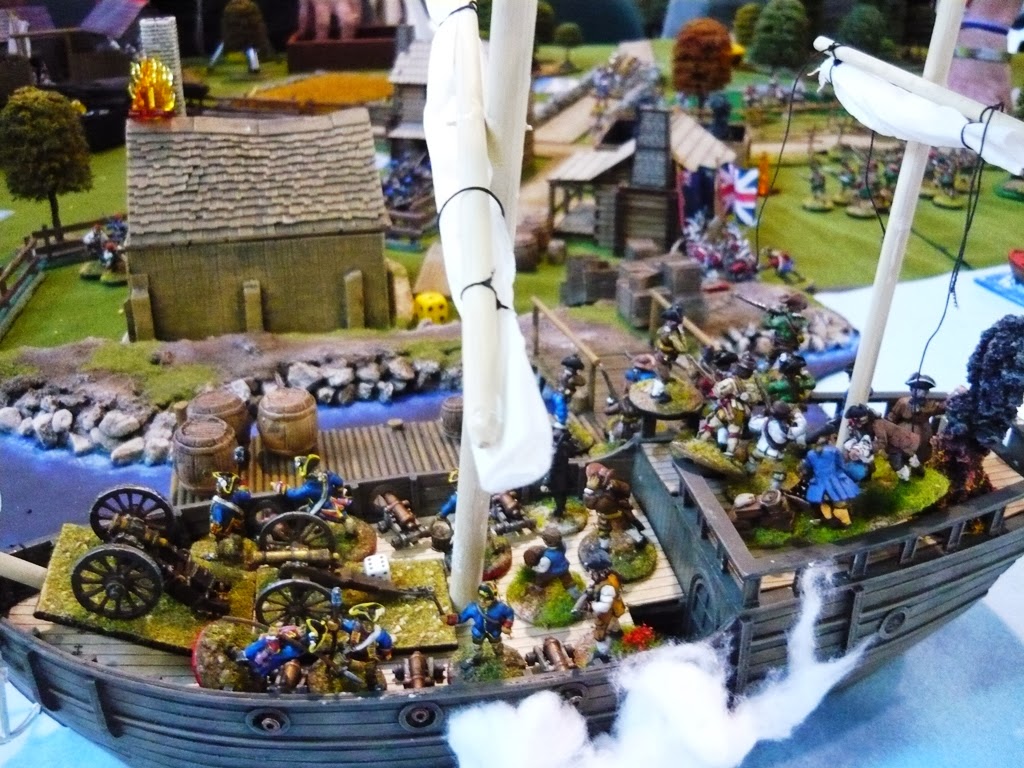 In this they also did the French a service as inexplicably the fort's guns were masked by the town from firing on vessels approaching the docks. A major oversight on the part of the outpost's military planners, only rectified by the British burning half the town down! 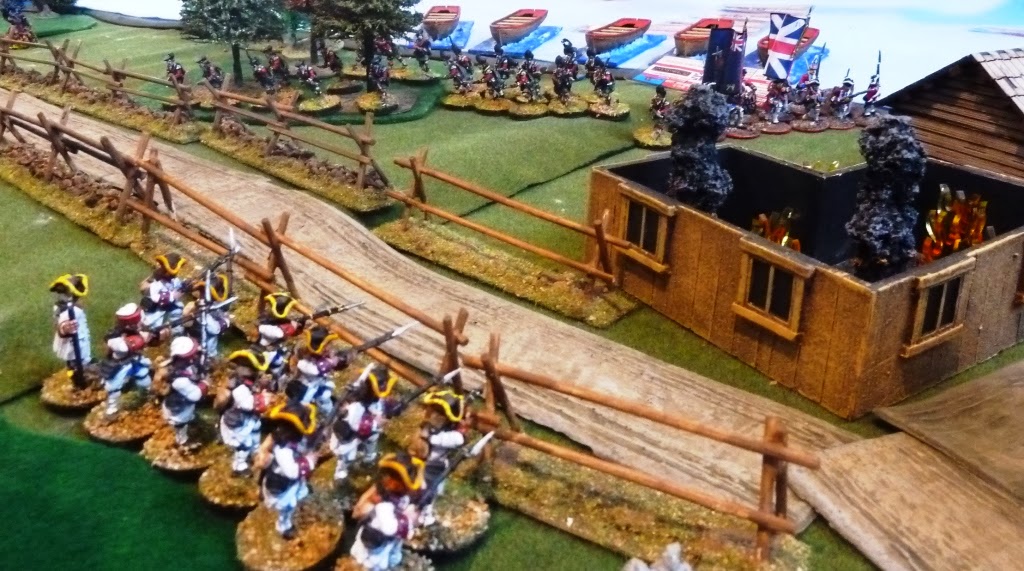 The first success with the guns went to the French who managed a hit on one of the troop boats towed by the brig, just as they began to row for shore.  One of the fort's guns (32 pdr?) hit one boat full a midships sending timber and tartans skyward in a giant geyser of water. Now here's another controversial bit. Once a hit is made (on a D5-6) you dice for every figure in the strike zone measured from the gun's muzzle see if they are killed (D4,5 or 6) - in this case 10 dice for the entire boat-load of ten men. Four were killed outright and the rest ended in the water. A second boat stopped to pick up survivors (so far, so good) - dicing to see how many (three I think) - but the rest were deemed to have swam to the shore!  What a complete load of bollocks. In an era not known for producing many swimmers and with fully laden Scottish Light Infantry in heavy kilts I argued that any NOT picked up by the second boat should be considered drowned.  Not unreasonable I thought but as the rules did not cater for this situation and common sense clearly was not going to prevail, we enjoyed the unedifying spectacle of several Scots Light Infantry not only swimming ashore but magically retaining their weapons, drying their powder and eventually advancing and firing on the French defending the town. Amazing! 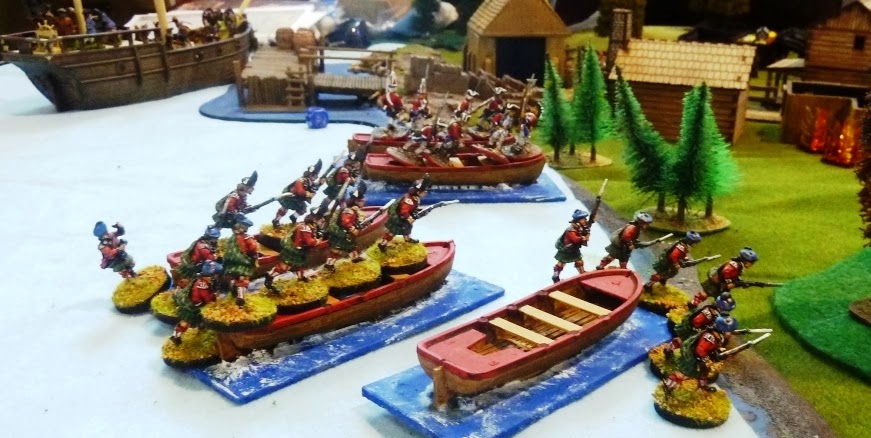 This load of codswallop was fortunately balanced out by the next big success for the French guns. As the British Grenadiers disembarked from the ship and stormed down the dock with the militia right behind them, the only French gun with a bead on the dock fired and hit on a D6.  The trajectory of the cannonball as measured from the mouth of the French gun travelling down the length of the dense column of men. Six grenadiers and four militia disappeared in a red mist as the heavy cannonball ploughed through the column. The remaining militia jumped in the river! 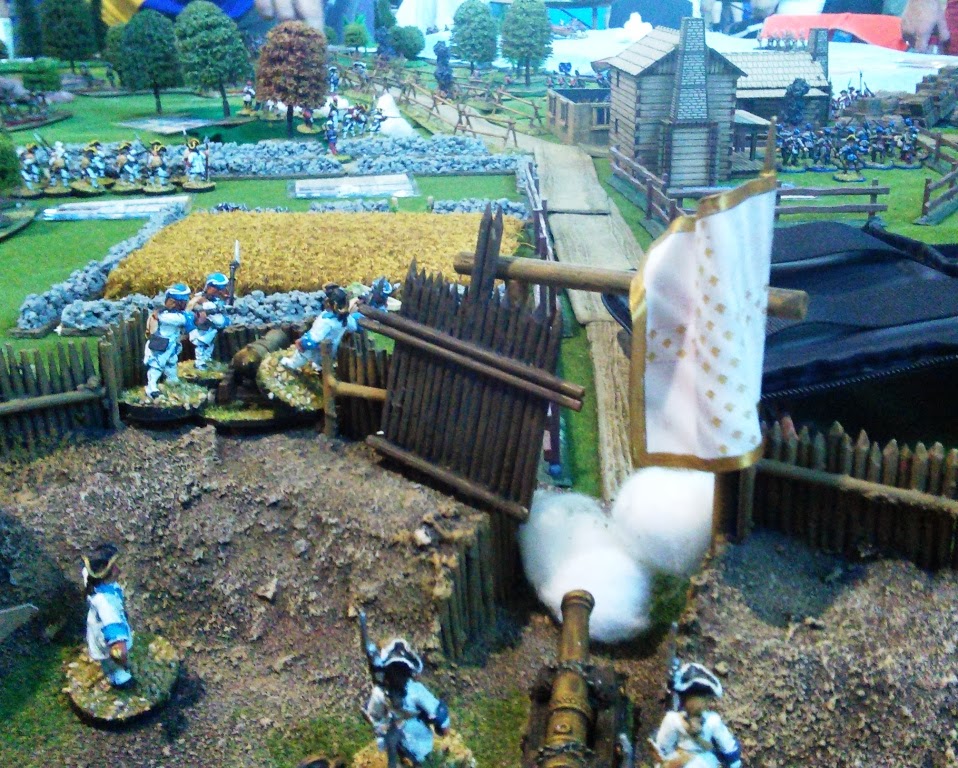 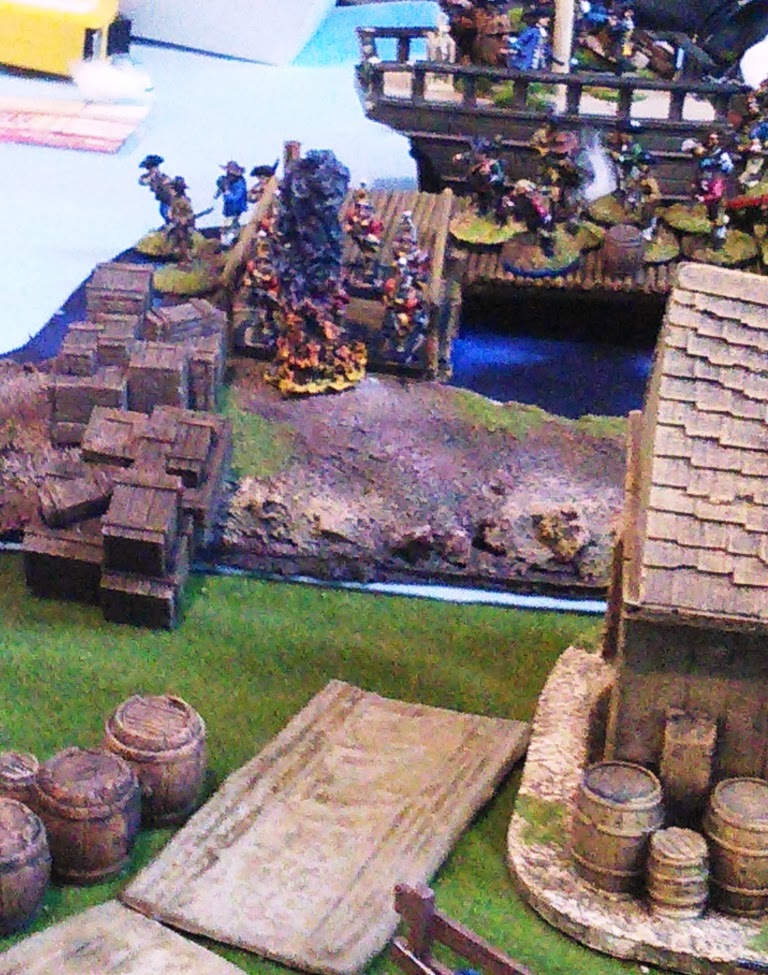 It was easily the most deadly and effective artillery strike of the entire campaign and for a while stopped the riverside invasion in its tracks. John's Correurs de Bois, masked by the buildings in the town not burned down by British artillery fire, then emerged in the dead ground next to the docks and opened up a telling fire on the British artillery and troops disembarked from the brig.  But Doug and his British commanders were a long way from finished and he had got enough men ashore from the boats to really press his attack on the town. 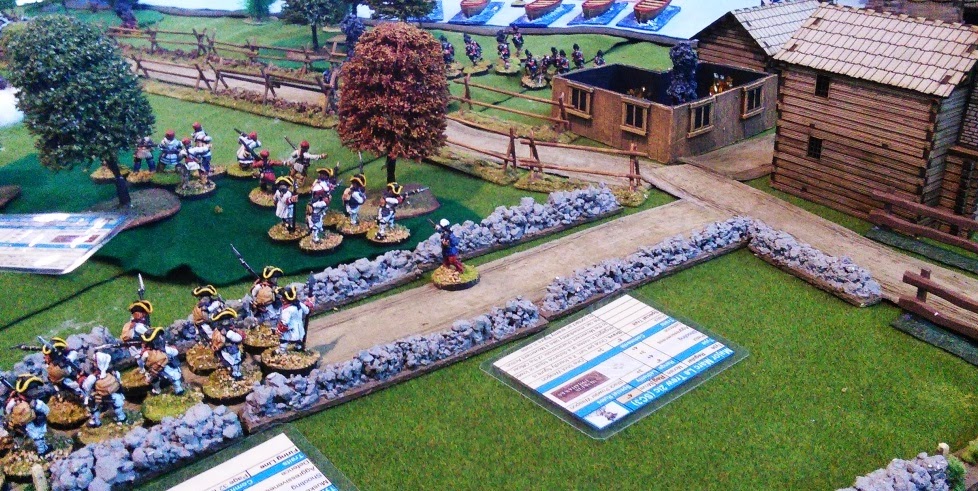 The French regulars closest to the town had the problem of beating off the men from the boats in one direction while the other part of the British force closed in on their flank and rear from the wilderness road.  The one fort gun sighted on that road could only do so much - it got off about half a dozen shots in the course of the game but only two hits of which only one did any real damage.  It helped slow but couldn't stop the British move gradually enveloping the French left.  Again with numbers in their favour, the British gradually whittled down the French defenders. 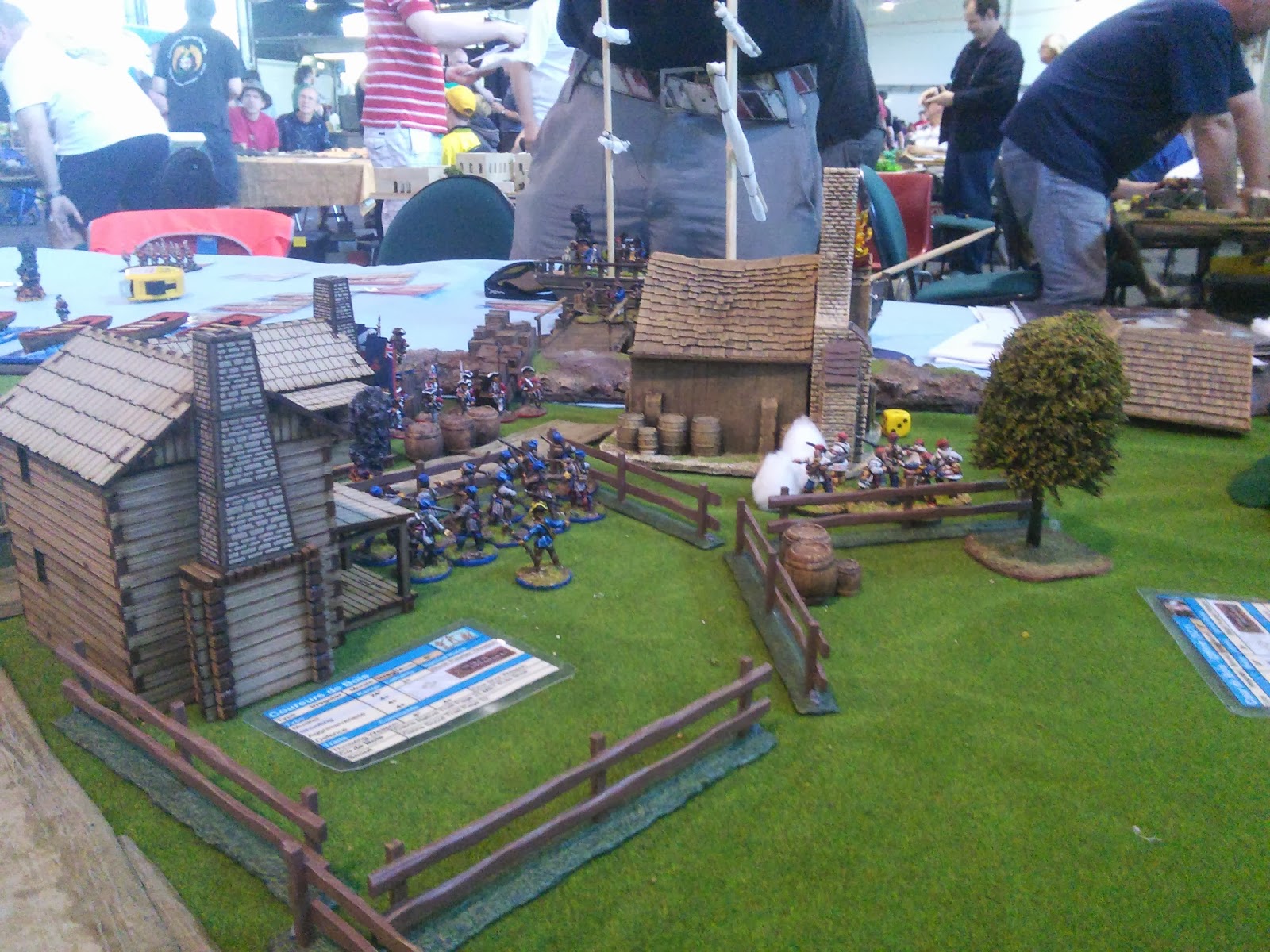 It was more of a desultory affair on the French left with the British having plenty of units but a great reluctance to come out of the woods and offer them as targets for the French who were worn down by incessant musketry.  This was particularly noticeable on the defences adjacent to the road where they were caught in three directions. Even though sheltered by dense woods such was the strength of fire the Correur de Bois were the first to go.  Those pesky Mohawks also got into the action again, wiping out the other Correur unit - well done (again) to young Alex their commander! 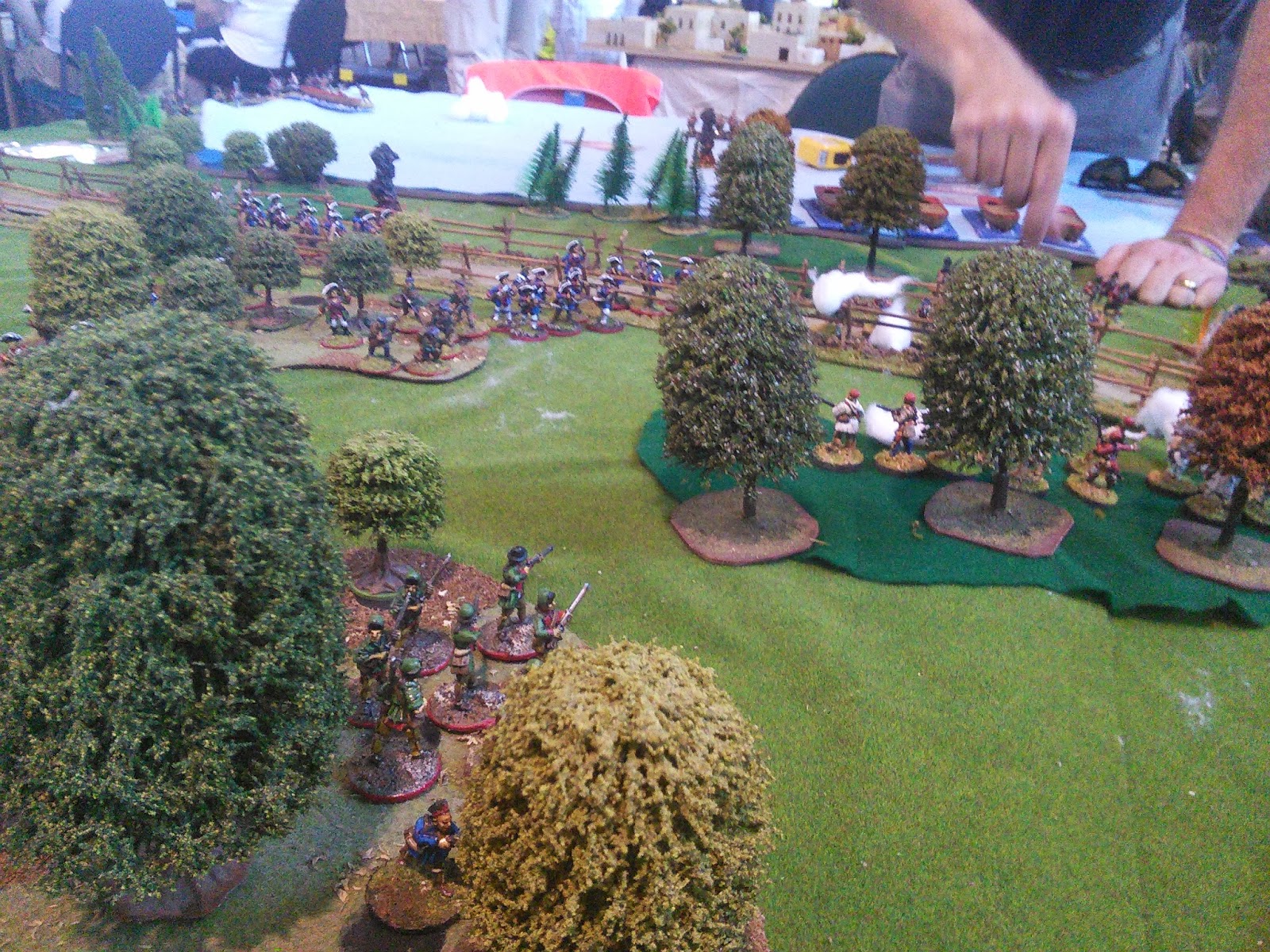 Despite the British success on the flank John cleverly defended the town, repulsing attack after attack from British regulars. His shooting on the troops on the dock also played havoc with British plans but inevitably his Correurs and Marines were whittled down to nothing (although not entirely destroyed).  By lunch it was clear the British were not going to be able to attack and take the fort, let alone the half of the town that remained.  The surviving French were preparing to withdraw to the fort for the final battle when the umpire Andrew called the game in their favour, deeming the British assault to have failed.  Had the British destroyed a few more French units they would have likely have taken or destroyed the town (one of the objectives) and forced a draw or maybe a final 'assault the fort' scenario.  After their licking on Day 1 it was nice to finally secure a win. More importantly those participating said they had a ball and would love to play again, which was our overall objective!

The final game after the break for lunch was a straight out stoush spectacular - an encounter battle 'take the town crossroads' - with all the figures on the table.  All the commands were given over to guest gamers and it was standing room only around the table as half a dozen on each side duked it out.

The French began their assault on the town with hordes of Huron.  What the American colonial militia thought of it was not recorded but they were most reluctant to join the fight!  The French stormed into the town and repulsed British attempts to force them out. 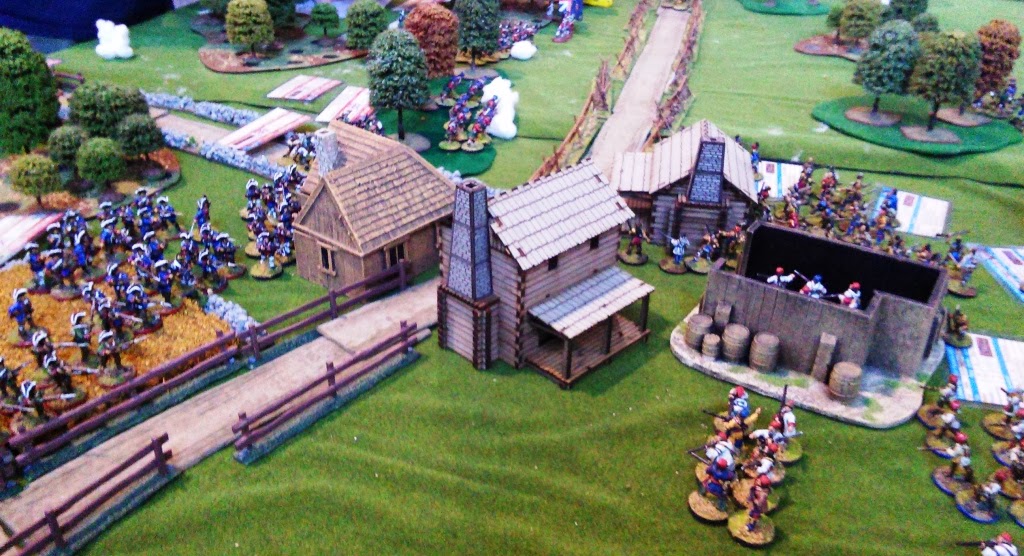 But things didn't quite go the French way on either side of the town with the regulars and Marines caught in the open by Rangers and Provincials. When they weren't masking their guns the French artillery did quite well with some huge hits but not enough to discourage the British who infiltrated the woods in front and shot down French obligingly lined up in the open.  The Marines on the other side of the town also copped horrendous shooting from the colonial Provincials but being regulars they refused to run away and supported by the Correurs, once more pressed their attack. 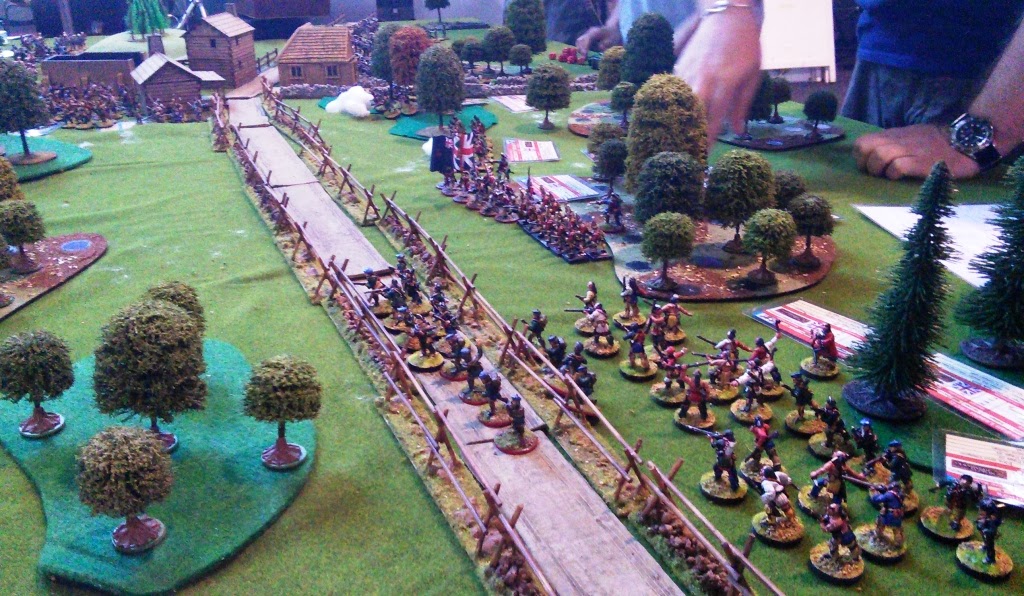 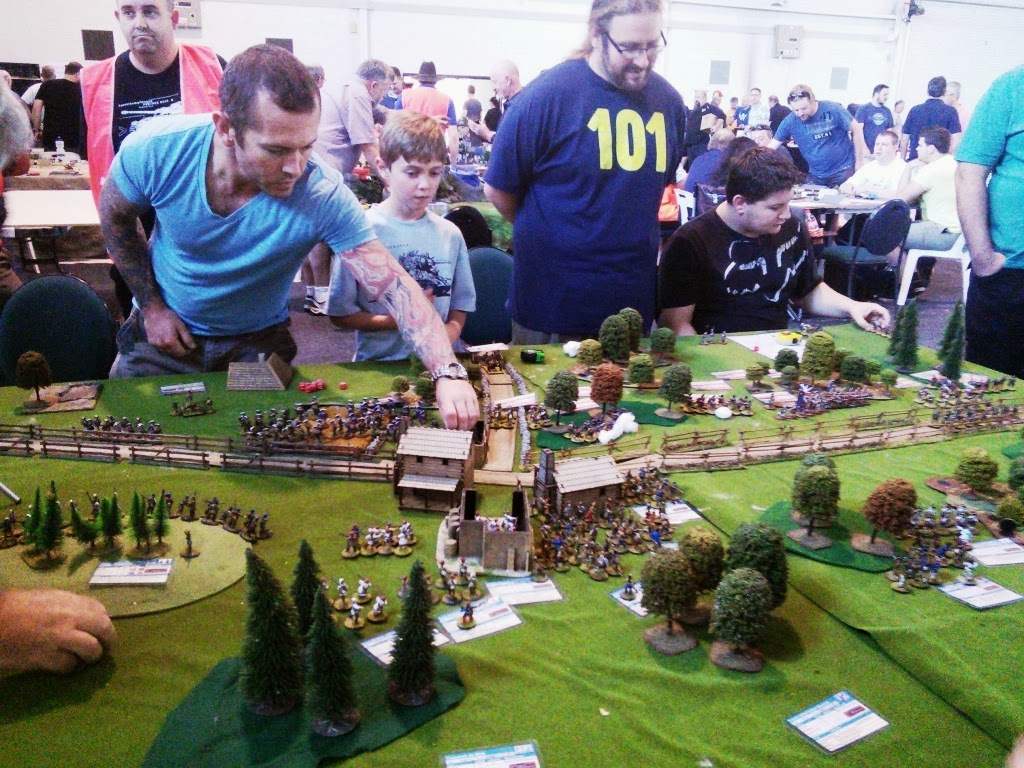 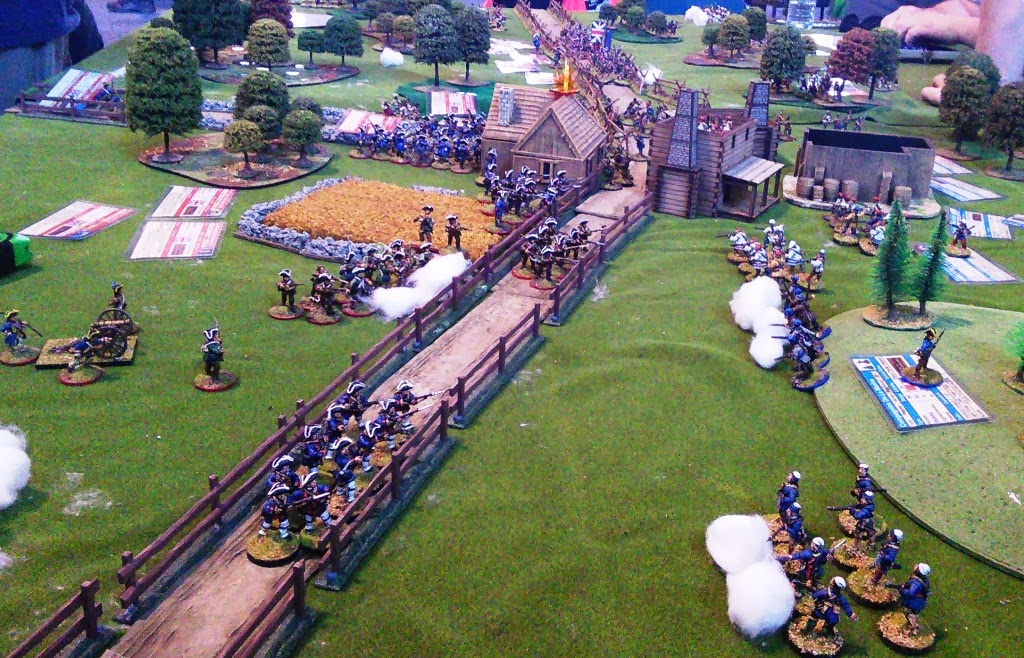 The British commanders tried every means to get the French out of the town but it was young Alex who finally made the difference and providing one of the highlights of the game.  Given command of the artillery battery he opened up first on the Indians and burned them out then on the Correurs in the town's only two story building. The howitzer shell plunged through the roof and the first floor before exploding and bringing the house down, French and all! The remaining Correurs wisely decided to abandon what was left of the blazing town. 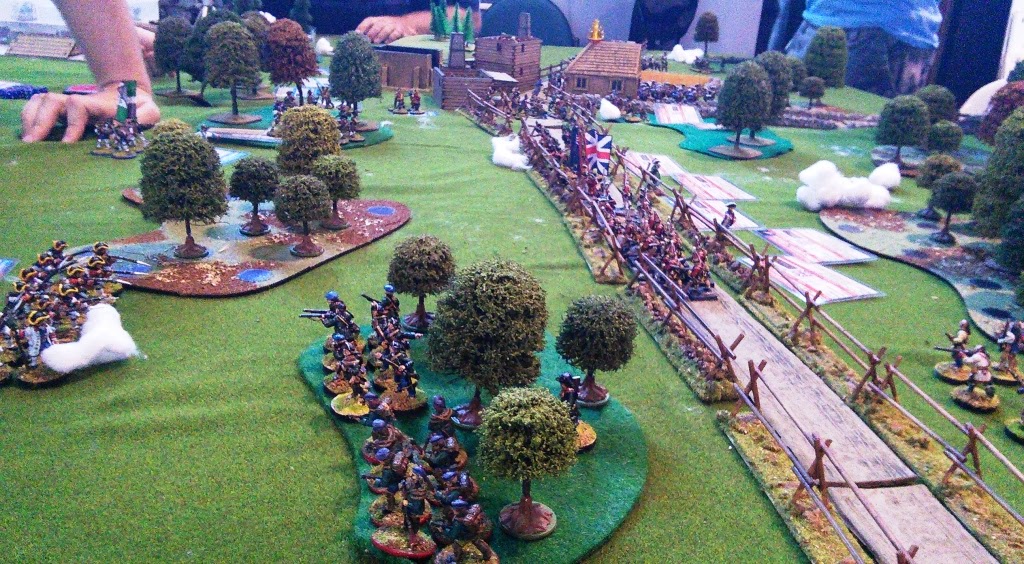 The last turn of the game saw another frenzied attack by a single Huron chief (what is it with these guys - bloodthirsty or what?) with three Provincials cut down in hand-to-hand and the unit driven off in panic. The last round of combat once again saw the Huron finally cut down but it fatally stalled British attempts to retake the town so the game was called narrowly in favour of the French.

The last game was a spectacular affair involving at one point or another a dozen players and many more dozens of onlookers.  It crowned what was a very successful Cancon for us historical gamers and showcased the hobby for dozens of gamers, attracting everyone from the under 12s to well, grey haired pensioners like meself!

Had a great time and my sincere thanks go to Andrew - figures, scenario design and scenery (fort and docks) umpire; Doug - figures, scenery (the unsinkable HMS Walsh!) rules guru and British commander and John who managed to command successfully on both sides for both days!
Posted by Doc Smith at 5:47 PM