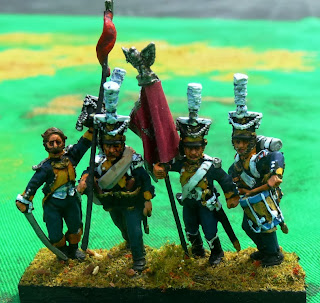 Finally finished my Murowski Miniatures figures - the beautiful Paul Hicks sculpted Napoleonic Polish infantry. I got the figures from Roger about a year ago(?) and had over half of them sitting around until a few weeks ago. The last of them to do was the artillery battery which I finished yesterday.  I now have a full brigade - 100 foot divided into two regiments of two 24 figures battalions apiece, with two extra stands skirmishers for the Vistula regiment I've painted in winter uniform. 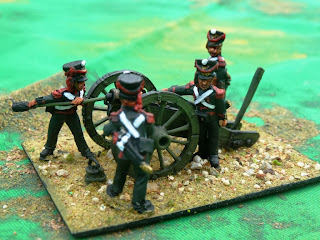 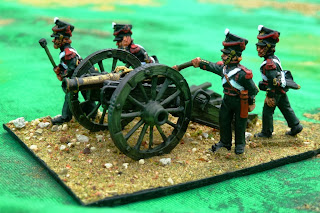 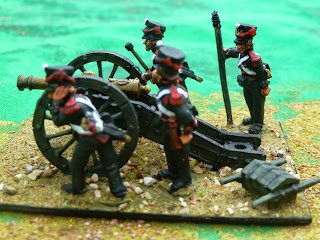 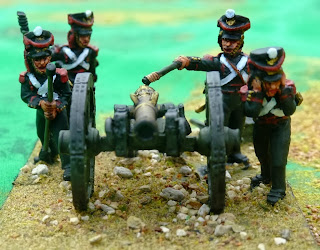 The artillery are two 8pdrs and a howitzer and for completeness I've combined them all with a regiment of Perry's lancers. I  had done the lancers up as Guard Eclaireurs (scouts) but the uniform is almost identical with that worn by Polish lancers of the late Napoleonic Wars (from 1810 onwards) so they fit in rather well. 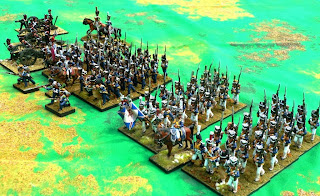 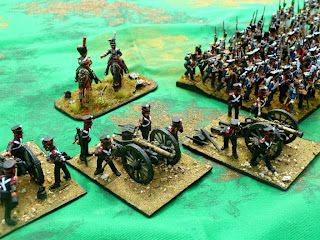 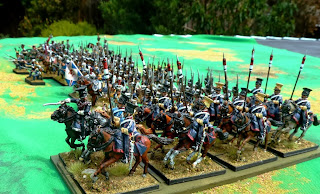 The Vistula Legion infantry are now two regiments in summer and winter uniform. I did this purely for esthetic reasons - the uniform combination of dark blue jacket with yellow facings (and czapka) has always appealed. The idea is I will have four French and allied brigades (or thereabouts) for BlackPowder games: Polish, Italian, Bavarian and French.  Opposing them I now have about 5 Allied brigades (3 Austrian and two Russian).  I've still got to finish my Austrian and Russian brigades from the Perrys' figures I've bought - which is still hundreds of figures to paint. Tempted to get more Murowski Poles but there are more than enough of the unpainted Perry's to do. 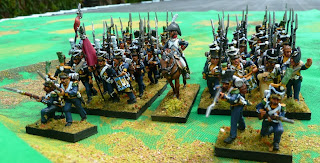 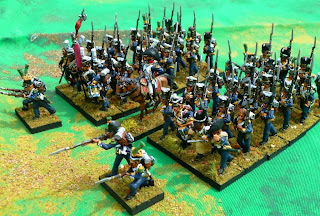 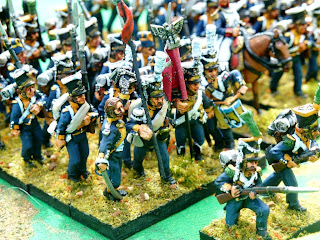 I particularly liked some of the skirmishing figures - wish I'd ordered more.  The Vistula regiment in winter uniform have 26 figure battalions rather than the usual 24 to add the skirmish stands in. 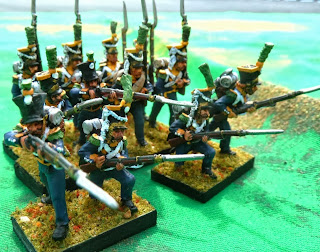 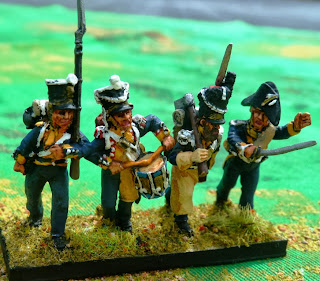 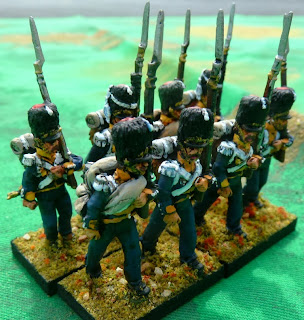 I must admit I love the Poles and waited for years for someone to produce quality figures before diving in and buying up a motza of metal. Its taken me a while but its great to have finally finished painting them. One regiment of them has already debuted on the wargaming table - now they're finished I can't wait to get the whole brigade into action!

I also did a bit more tinkering with my Legere, changing the command stand around yet again by adding two figures and making a command stand for the carabinier company.  The other revelation I've discovered is Testor's Dullcote. I know I'm a few years behind the times but after experimenting with a number of flat finish varnish systems including airbrushing artist's varnish on figures (good result and cheaper but too messy and fiddly to set and clean up) a decided to try one of the small and expensive cans of Testors. It gives the best flat varnish finish on painted figures I've ever seen. The colours seem to be enhanced by it as well.  All my new Poles as well as the Legere have now been finished in this spray lacquer. 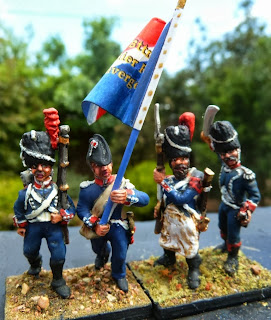 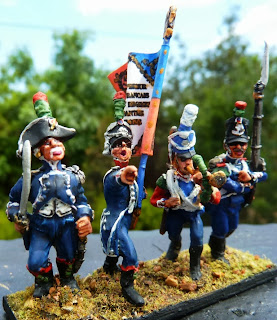 A word of caution though, as good as the Testors is it has one major drawback.  I smelt some pretty heavy chemicals in it ('petroleum distillates' etc on the label) like Toluene or worse - God knows what the propellant is.  As it's an aerosol I'd only use it outdoors - and avoid getting a snoot full as it can't be good for you.  I think I got an allergic reaction to it after  I used it carefully, so beware people.  It gives great results BUT incorrect use could have a very major health risk attached to it.

Now I've scared the pants off you all, hope you enjoyed the post on the Poles!
Posted by Doc Smith at 5:00 PM