My mates Doug and Andrew have been busily collecting figures for the North American colonial frontiers war more commonly known as the French & Indian Wars.  They have a beautiful collection of Perry, Northstar and Galloping Major figures covering the French Provencials (militia) - Coureurs des Bois etc, their Indian allies (mainly Iroquois), and their British protagonists: Highland infantry (the regulars), Rogers Rangers and American colonial (Virginian) militia. Truly wonderful figures.  The rules they were so enthused about and wanted me to try are the card-based Muskets and Tomahawks skirmish rules. I have to say, after one game - I'm sold!  They were a lot of fun and with four units a side, the ideal size skirmish game IMO.
The scenario they devised was an interesting one, a reverse of the usual in that it was the French and Indians who were protecting armed civilians in a settlement and the colonial British and American forces conducting the raid to snatch them.  Once the civilians were captured or killed it would be game over and a British victory. Stopping them from doing so a French victory.  Pretty straight forward, right?
The French Provincials were commanded by a Mad Major - apparently someone who had been out in the woods far too long and was prone to bouts of complete insanity. Great. This was represented by a random card which would enable the British (Doug) to dice to see if he could get control of the addled French commander for a turn and presumably order his troops to do something completely daft like hopelessly charge formed troops across open ground or turn and fire on your own.  Four times we diced and three times I won so the Major kept it bottled - right up until the last turns of the game when he lost it completely. Its a great rule and gave us a few good laughs.  For the Brits they had a slightly less mad but rather impetuous commander of the Highland Grenadiers who could on his turn, get a sudden blood rush to the head, whip out his Claymore and charge off into the trees.
The game started with the French getting a run of activation cards enabling them to advance to the woods in front of the town and open up on the Scots.  Doug finally got a few activations himself and wasted no time getting his elite Highlanders into the fray.  I must say I was quite content to hide behind the fence and blast away at anything in front of me. The unit of French I'd advanced on my right got some shooting in on the Scots BUT they shrugged it off and the elite grenadiers with their insanely impetuous officer got close enough to get in with a ferocious Highlander bayonet charge.

Predictably they did in the French although the Frogs were also armed to the teeth with wicked tomahawks etc, (everyone is in this era!) and gave good account of themselves before loosing half their number and being driven back.  But there's the thing - I was very tinny with my saving rolls this game and this unit in particular should have disappeared off the table several times managed to hold on time and again.
At this point it looked like it was going to be very bad for the French.  Most of the civilians were in the town right behind the Provincials just flogged and forced to retreat.  The victorious Grenadiers looked like they would break through before Andrew's French allied Indians could be activated and get into the fight.  Again my arsey dice rolling saved the day.  Half the French behind the fence could just get a bead on the Grenadiers as the emerged from the woods and let loose a ferocious volley.  It felled several Highlanders, stunned them and Doug failed their morale roll - the grenadiers ran back the way they came!
It was touch and go but the recoil of the grenadiers gave me a breathing space - which was good as Doug was not finished yet as his crack Roger's Rangers infested the woods on my left and together with the Virginian militia opened up on the Frenchies behind the fence.
The French started taking more casualties but in the nick of time Andrew got one of his warbands of Iroquois into action. Doug's Rangers are all crack shots and quickly took a bead on the fearsome warband of Indians closing in on them, driving one off (they hate being shot at apparently!) but the second warband through shear weight of numbers locked horns with the Ranger's in a ferocious hand-to-hand.
It took some while to get all the Indians into action and even then some ran away as soon as they sustained shooting casualties. But our tinny dice rolling continued and Andrew was able to rally most of his Indians every time.  The Indians are lousy shots (cheap trade muskets!) but are vicious in hand-to-hand so the best (and perhaps only) way to handle them is get close with the opposition and melee as fast as possible. The photo above makes it look like the Indians have copped a couple of volleys - drove some off but more and more came on - and the smoke actually indicates the Rangers and militia are unloaded. The trick is to get the Indians to close before they can reload. This soon developed into another rolling melee.
The Indian warbands prevailed and wiped out the militia and Rangers all except the redoubtable militia captain who somehow survived and ran to fight another day - after dispatching a few more of those pesky savages of course!  Last seen firing his pistol at Indians in the gloom as night fell.  Which brings me to the end of the game and the event card I drew earlier - night was falling and in the failing light all vision was reduced by half.  It was also at this time that I finally lost my dice duel with Doug for control of my Mad Major - who finally lost his marbles and ordered the French behind the fence to fire on one of the victorious warbands in the gloom.
The French were driven back from the fence but rallied and reformed in double rank - hence the reason their volleys were so effective on both friend and foe!  The last turn of the game as night fell saw a final desperate melee between the victorious Indians and the Scottish regulars, the latter reduced by continuous firing from the French occupying the town. The Highlander Grenadiers had also reformed and were firing and advancing once more on the town, but it was all too late. 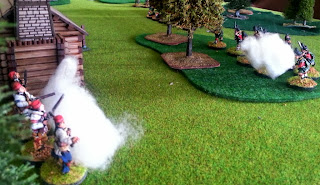 The Grenadiers firing gradually reduced the French unit defending the end of the town - one final charge and they would have taken the town so I formed up my regulars behind the mad commander and marched them double quick time to the end of town.  Fortunately Andrew's Indians (all that was left from two large warbands that is) had wiped out Doug's Scots and in doing so got behind the Grenadiers, ending any chance of defeating the towns defenders and seizing the civilians now hiding in the barn in the middle of town.

What a game! I love the idea of the random cards dictating the flow of the game not just the dice. I have used card systems before but this one is really well thought out.  The boys tell me that they are doing a large Muskets & Tomahawks skirmish demo game at CanCon next year - having seen all the beautiful figures they have - we used only a fraction of them for our game - it'll be really spectacular and a lot of fun.  And watch out for any mad commanders!