Wargaming the 1809 Campaign: Retreat to Ebelsberg

We had our monthly wargaming meeting at the Lanyon club and as Doug and I hadn't been able to attend last month's we decided to have a blast from the past and try a Black Powder Napoleonic game again - our first for some time.  We decided to play-test a possible demo game scenario for a future con so I devised a game from something I put together years ago and published in the now sadly defunct 'Kriegspieler' magazine.  I chose the battle of Ebelsberg during the 1809 campaign, specifically the final scramble of the Austrian forces of the V & VI Corps under FML Hiller to cross the Traun river and march to join the rest of the Austrian army under Archduke Charles.  Hiller had been conducting a 'coat-trailing' operation to make Napoleon think the Austrian army was falling back to defend Vienna.  Ebelsberg was the last major town on the Traun river where Hiller could finally turn and march to join the main army assembling on the Marchfeld.

The Austrians' retreat had become more desperate as troops sought to find a way over the last major river before the Danube and avoid being cut off by the pursuing French. The bridge over the Traun at Ebelsberg was over 500 meters long and the storming of it by the French and the valiant defence of Ebelsberg by the Austrians is one of the epic but lesser known battles of the 1809 campaign.

Essentially, the better part of several divisions, mainly of Hiller's V Corps were scattered in and around the village of Klein Munchen, situated at a vital crossroads that led to the defile approach to the bridge, the only way across the river into Ebelsberg.  The main arm of this road ran north out of Klein Munchen to the hamlet of Scharlinz, itself situated at the end of another defile that ran through a large forest.  It was down this road that the main body of the French pursuit was coming, led by Marulaz' light cavalry brigade.  Historically, a battalion of Grenzers formed a line across the mouth of the narrow defile.  They drove off the initial charge of Marulaz' Chasseurs and even attempted to ambush French cavalry passing through the narrow road from the forest.  They withdrew to Scharlinz village where they held out briefly before being overwhelmed, the rearguard survivor's eventually joining the increasingly chaotic throng making for the bridge over the Traun. 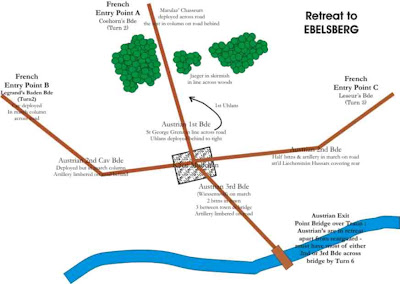 To make this more interesting and adapt it for the wargaming table I simplified it with three Austrian infantry brigades and one cavalry brigade which composed both a rearguard and units withdrawing through the crossroad of Klein Munchen. Their objective was to hold off the French and prevent them from seizing the crossroads while at the same time getting one or more brigades across the bridge (i.e. off the table) by Turn 6.  The French objective was to seize the crossroads and prevent as many Austrians as possible from getting away by Turn 6.  To do this the French have two cavalry brigades and three infantry brigades converging from three directions. All Austrians start on the table and to speed things up we decided all French forces on the table by Turn 2. 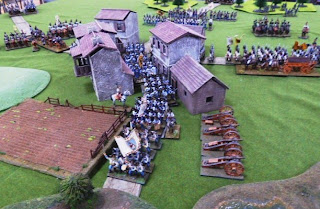 With Doug as the pursuing French, the game started with a predictable traffic jam at the crossroads as Austrian brigades from the left and right flanks tried to negotiate the narrow road through and out of the town to the bridge.  Getting Austrian commanders to direct their troops proved to be as difficult as ever with one managing to get all his brigade on the road heading in the right direction and the other getting half marching and the other half, well, going nowhere or milling about aimlessly outside the town.  Fortunately for the rearguard I put a useful general in charge (Radetzsky - who was actually there historically), leaving his cav bde commander to cover the western road while he directed the rest of the rearguard units (battalions of Warasdiner Grenzer, Hungarian IR 51 Splenyi & 2nd Jaeger with the Erherzog Karl Uhlanen and Lichtenstein Hussars attached) who barred the main road to the north and formed an arc to protect the withdrawing troops on the roads.  The French have initiative so go first in this scenario and Doug immediately launched his veteran Chasseurs-a-Cheval at the Grenzer barring their path, with his hussars behind in close support.

The action was fast and furious with the Grenzer unable to get enough shooting on the French cav before they hit (the Grenzer's little battalion pop-gun proved to be pretty useless and 'died' in the ensuing melee).  Nonetheless the Grenzer managed to hold on.

On the eastern approach to Klein Munchen the Lichtenstein Hussars provided a cavalry screen for the retreating Vienna Volunteers of the 2nd Brigade, who had a great deal of trouble actually getting going as their commander in true Austrian tradition repeatedly failed his command rolls! The eagle-eyed amongst you may notice that the hussars are actually Russian - recruited for the purpose as my Austrians are not yet painted!  Similarly I used my Bavarians for the Baden Brigade as unfortunately I sold off all my old Foundry Badeners years ago! (Time to collect another army of them I think!)

Over on the western road the Baden Light Dragoons came up against the famous O'Reilly Chevau-Legers and were destroyed but by then the Baden infantry had come on and the artillery battery deployed.  An interesting discussion ensued about break-through charges and catching infantry units in field column before they form square - which they do automatically in BP.  They would have formed square but not been able to give closing fire but it didn't matter as cavalry will not contact infantry in square when charging (they pull up 3" short I believe). It didn't matter as we agreed (reluctantly) that on this occasion the Chevau-Legers didn't have quite enough movement to do it (they have to be within half their movement i.e. 9") so they retired to their start point where they were promptly hammered by Baden artillery, broke and fled the field!  It was a comedy of errors on this side as both repeatedly failed their command rolls so everyone basically stood there in a sort of Mexican stand-off.  Most painfully my Austrian cavalry battery (the Perry's one in their first game) failed to move, unlimber and shoot for most of the game - then got one hit with a howitzer on a column which Doug managed to save - so effectively useless.  But they looked nice.

On the north road the Uhlans were busy charging into the last regiment of French dragoons.  Although outnumbered they also managed to vanquish the dragoons after a fierce melee.

Despite my success against his cavalry, the Austrians were about to get their comeuppance as Doug's vaunted crack light infantry brigade of Tirailleurs Corse, Po and 17th Legere came on to the north and another four battalions appeared on the eastern road opposite the Lichenstein Hussar picquets.

Despite the shooting hits I got on the Tirailleurs, it wasn't quite enough to disorder and they charged home into contact with the Jaegers who courageously decided to stand and protect the flank of the Grenzers rather than evade and save themselves.  The resulting hand-to-hand was bloody but even with their wicked sword bayonets (surely worth another pip on the dice!) French numbers finally prevailed.

On the Austrian right French numbers were starting to make an impact on the confused Austrians.  The hapless battalion of Vienna Freiwillinger copped it in the flank and were promptly destroyed.  At this point (Turn 4?) all remaining Austrians who hadn't made the road to the bridge were ordered to join the rearguard and keep the crossroads and thus the bridge approach out of French hands.  The last retreating battalion about faced,  marched out of town and formed line just in the nick of time as the French came on, smashing into the remaining battalion of Vienna Volunteers. 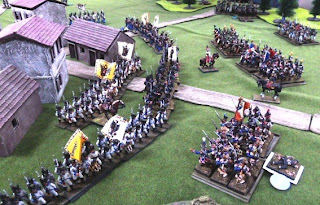 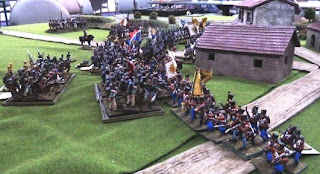 At the same time Doug's crack Legere & Tirailleurs smacked into the tired Grenzer.  Despite plenty of shooting hits and Doug's uncanny ability to save his hits time and again - it wasn't enough and although the Corsicans bounced back, the Italians pressed home and eventually prevailed.  The Legere  and a Line battalion simultaneously hit the last battalion of the Viennese boys.  They fought off the infantry but as the Grenzer had found, the light infantry veterans were a tough crowd and they finally destroyed the Freiwillinger.


The French line battalion was destroyed, the Legere and Corsican Tirailleurs thrown back but both the Grenzer and the Vienna Volunteers were also destroyed, enabling the Italian Tirailleurs de Po to break into the town and take the crossroads, effectively cutting off the hard pressed Austrians on either side of the town. Had the game gone another Turn the French would have controlled the town and the approach to the bridge, cutting off all the remaining Austrian units and forcing them to surrender, pretty much paralleling what happened in the first phase of the Battle of Ebelsberg.


On the western side of town IR 51 Splenyi and the remnants of the cavalry brigade (and their useless commander who has been immediately placed on the retirement list!) were faced with a virtually unscathed Baden brigade and would have been certain to have been hit in the rear or flank by the Tirailleurs in the next move.  As the French were now in the town the Austrians are effectively cut off.  Likewise the Uhlans were isolated to the north, having failed their command.  There was no way the Austrians could have even fought this to a draw in this situation, so I'm happy to give this one to Doug.

It was a lot of fun and with a few tweaks, the scenario could be a good one for the next demo game.  Until I paint some more, it uses up just about my entire collection of Napoleonic armies (minus the Russians and a few Italians & Poles) so it was a worthwhile exercise but I'd better get some more lead painted up!
Posted by Doc Smith at 2:06 AM