The Battle of West Kokoda Pt.1

After much unavoidable delay we finally finished our initial Kokoda battles for the airfield with the fight for West Kokoda. These battles are following an increasingly familiar outcome: determined and ferocious attacks by overwhelming numbers of Japanese in the most difficult of conditions resulting in the annihilation of the Allied forces (after some fierce resistance of course). 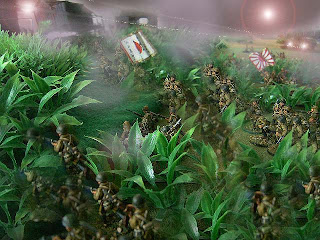 After the debacle of the East Kokoda fight, the Allies (Australian militia with some local Papuan constabulary) under the command of C-in-C Doug (who played Col. Owen, the ill-fated Aussie commander of the 39th) and myself now faced at least two companies of veteran Japanese.  At our disposal for West Kokoda we had three under-strength platoons of militia, one of which was the Headquarters platoon made up of the battalion’s cooks and clerks and supported by one Vickers HMG – our only heavy weapon. 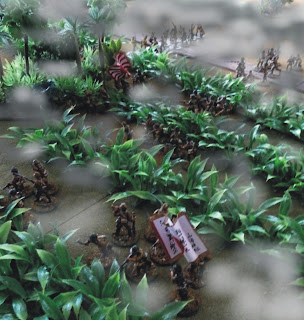 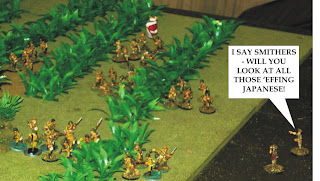 Our opponents were the redoubtable Greg and Cameron commanding the South Seas Detachment – Nankai Shitai – (the 144th Regt) of Japanese veterans.  Apart from several HMGs of the Woodpecker variety they were accompanied by numerous mortar tubes and a mountain gun - more freaking star shells!  Now a less experienced opponent may have just relied on their overwhelming numbers and thrown them against us in virtual human wave attacks (not too far removed from what happened historically!) but not these two.  I'm afraid they were rather stingy in offering their troops opportunities to die for the Emperor. 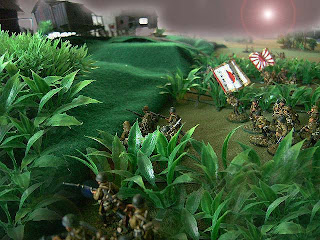 Greg’s first attack was on the centre of the Aussie line located along the edge of a tall escarpment, the Japs advancing through the native gardens, cleverly created by Andrew (the game adjudicator and Master of Terrain) to the base of the escarpment and (temporarily) out of the Allied fire.  Like all previous attacks, these were made in the dark of early morning, visibility also hampered by mist and heavy drizzle.  The Japs weren't visible until they closed within 15” of our positions.  Bearing in mind that firing would expose the location of our positions and although dug in, they were only ‘scrapes’ – shallow emergency trenches – and only one pip's worth of cover! 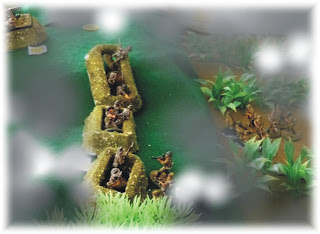 By Turn 2 the first Japanese sections managed to climb the escarpment and
were into our positions before we could cut them down.
Being once again at night with mist and rain made the Allied job of acquiring targets amongst the advancing Japanese extraordinarily difficult.  Our rolling for shooting did not help either - the lone HMG did some long range execution once - then failed to inflict any significant damage and was repeatedly under return fire.  We ended up trying to withdraw it on about Turn 3 and only managed to get the crew wiped out.  In the end it was the brave cooks and clerks platoon who managed to carry it off to safety.  We also made a rather costly blunder (in my opinion) by failing to grenade the Japs at the bottom of the escarpment.  Historically the Japs suffered grievous losses from Aussie grenades while scrambling up the near vertical slope.  We fired everything off but failed to kill more than half of the lead section who slightly outnumbered us in the subsequent hand-to-hand.  The end result was the total loss of the two sections of the 1st platoon - and I whined about grenades for the rest of the game! 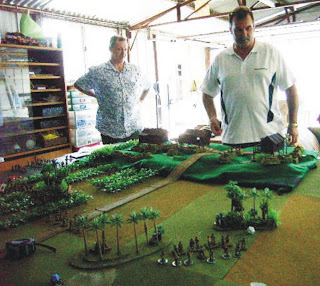 Doc's dilemma - now I've stopped whining about grenades, should I shoot again or just run away?
Andrew's helpful advice - you can do both - and so we'll attempt to 'shoot 'n scoot'!
To be fair we did get to use them once and they were remarkably effective, causing about four casualties on a decimated Jap section which then routed - the only time I can recall it happening so far this campaign!  Mind you they did manage to rally but the usual experience is Jap units that fail their Gut Check (morale) immediately BANZAI!!! right at you! 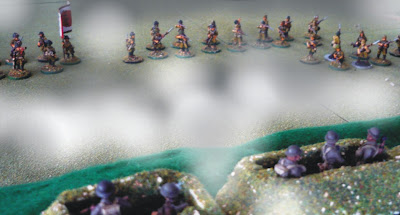 The ominous view from Maj Callow's position at the end of the village:
the Japs close in through the mist and rain.
At the other end of the village at the furthest point on the escarpment was Major Callow's depleted platoon of two 7-man sections.  Here I deliberately held fire until the Japanese were in visible range so didn't open up until Turn 3.  The idea was not to reveal my positions and invite an overwhelming response from over three times the number of advancing Japs.  But either way you were going to cop it as the Japs lit up our positions anyway with repeated star shells which meant of course Japs outside of normal visible range (but well within shooting range) could also range in on you once you fired but without you being able to see them and effectively fire back! 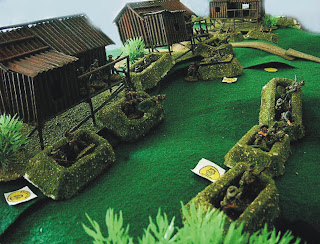 The Aussie positions are lit up once again by the ever present Jap star shells.
How the heck you are supposed to defend a position in those circumstances is beyond me - the Allies have tried three times so far and failed completely each time!  I even invited my Jap commander Cameron to fail his Gut Check - the idea is to provoke a charge and grenade 'em at close range -  but in spite of his best efforts he passed every time!  Nothing seemed to be working for the Allies.
How will they stop the Japanese hordes?
Will anybody survive?
Stay tuned for Part 2 of the Battle for West Kokoda!
Cheers,
Doc
Posted by Doc Smith at 11:00 PM