Finished my first batch of the Prussian infantry.  No huge dramas in painting, just a few decisions to make on the basing and projected unit size.  I hunted around a bit for the right shade of blue and finally found by accident a hobby paint - 'Blue Ink' 642 acrylic by FolkArt.  Hit it once with a weak black ink wash and finished with the Army Painter shade and got what I think is a great result.  I didn't abandon the washes entirely - just cut back on their use.  I ended up doing just one wash (of heavily diluted flesh or black ink) rather than layering them for all the colours.  I then sealed the figures up with the Army Painter and left them for 24 hours to make sure the coating was well cured and hardened. 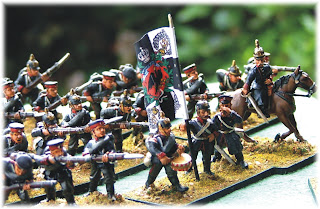 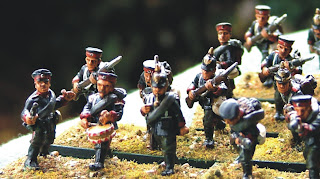 I have to say, despite their outrageous price nowadays, the FPW range is one of Foundry's finest in my opinion.  Beautifully sculpted figures with good detail and a nice range of poses.  There are some rough bits left from the moulding but nothing worse than you get with Perry figures (metal or plastic) and they were easily cleaned up.  Given half of mine were 2nd hand the worse aspect of the preparation was getting someone else's globs of dried bright blue paint off (we think they may have had Bavarians in mind then realised they were the wrong figures!) 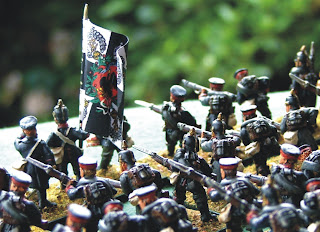 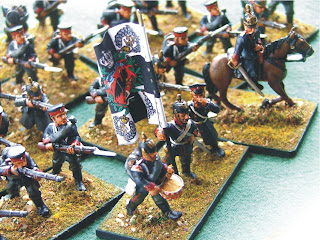 The only 'ring-in' for these is Herr Oberst's horse, which is one of the Castaway one's I got with the Uhlans.  Not the greatest but with some minor adjustment of Herr Oberst's greatcoat he was able to fit his ample Prussian backside on the rather slender Nellie's saddle - dignity intact! 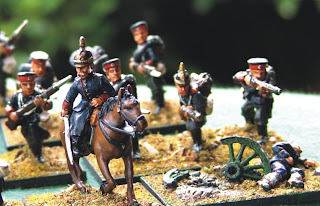 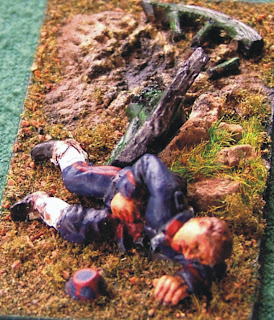 You may notice that to the right of Herr Oberst is a bit of what was left of a French artillery wheel accompanied by what was left of a French artilleryman.  He originally started life as a Prussian casualty but with a bit of file and blade work and one of those handy spare kepis from the Perry's ACW box, I convinced him to change sides!  I did him to match the Prussian artillery casualty marker I made a few posts ago for Black Powder gaming.  Dunno if it'll work, but it looks good on the table - so worth trying I reckon! 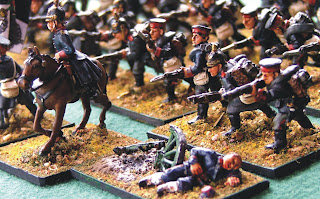 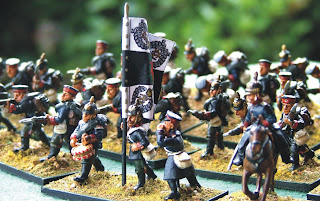 The other thing I really liked and that turned out well is the Prussian infantry standard.  This is the line one from  Ian Croxall's Warflag site.  I highly recommend Ian's site - the flags are excellent and cover a huge range of periods. 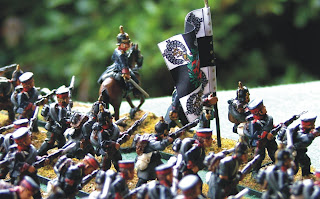 As I said earlier, the basing presented a few challenges but I decided to keep it consistent with my other FPW collection and made up 60 x 30mm bases with three figures per base.  Prussian units were larger than the French, reflecting better organisation as the Prussians and their German allied forces mobilised quicker and more effectively than the French.  There were on average 900-1000 men per battalion, four battalions to the regiment (three in the field & one depot), two regiments to the brigade. The battalions consisted of four companies of up to 250 men each and a headquarters section of another dozen, so roughly 1,000 in total.  I also have the French in stands of three figures, 18 to a battalion, so six stands.  To make the Prussian battalions reflect their greater numbers I would have to make up ten stands per battalion, which is a bit much so I've knocked it back to eight or 24 figures.  That will still need 72 figures per regiment, 144 for just one Prussian brigade. Phew!  Thatsa lotta figures to paint!  After this lot, only 108 to go.  Easypeasy...  NOT! 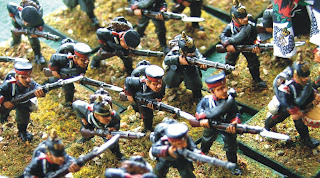 For the flocking I use my own mix but I added a leavening of 'Summer' blend from the Hobby Scenics flocking I picked up from my mate Dean's Olympian Games.  Gives it a nice variation without resorting to the static grass which otherwise tends to get over-used (and goes everywhere AND makes you sneeze!)

Well, thats my first Prussian unit, minus another 12 figures to make up two battalions for the first regiment.  There's that or 12 Chasseurs d'Afrique to do to finish my French cav.  Whichever ones I do, I know I'll enjoy it as I'm stuck at home for a few days to get rid of a rather annoying chest infection (and as my work colleagues don't appreciate my incessant coughing!) so plenty to keep me occupied!