Walked into my friend Dean's wargaming emporium-in-a-garage (very well-stocked and comfortable it is too) and given my recent WWII gaming jag these boxes of figures immediately caught my eye.  They're boxed figures for 'Rules of Engagement' - all Artizan figures by Mike Owen for Northstar in the UK.

As I'm currently doing Kokoda and I and my mates have quite a  few Australians and Brits, the box of Fallschirmjager were particularly enticing.  Perfect for doing Crete (1941).  You get a 28 figure platoon with command (including radio) and four MGs and eight SMGs (for all the NCOs).  The figures are nicely animated with the leutnant in his Luftwaffe feldmutze barking out orders - achtung! 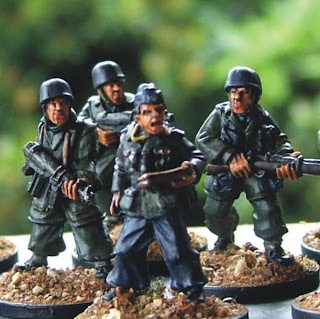 There is only one figure (armed with a KAR) with camo netting on his helmet, which is a bit disappointing but you can team him up with one of the NCOs carrying binoculars and viola -  you've got a sniper team! Just got to find something appropriate to make a scope for the rifle. 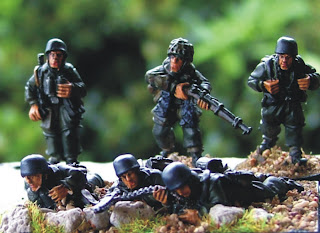 To the right of the 'sniper' is the radioman, part of the 4-man command group.  In front is one of my favourites, the three-man LMG crew.  Again an NCO with a pair of binoculars completes the MG squad.  As its a light, there's no stand, so I've got the gunner bracing it on some rocks.  The flocking on the bases is my own mix of "Mediterranean" - nice and rocky and dry - just like Crete! 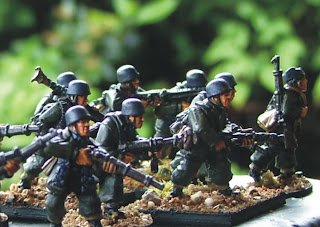 The LMGs are great and with four to a platoon, there's plenty of fire-power.  These were all MG-34s, the fearsome MG-42s (with 1200 rpm!) not coming in until 1942.  Likewise you don't get the STG-44s or the later FG-42s - the world's first assault rifles - until later in the war.  I believe they had some STGs on Crete but I'm not sure.  The uniform was also going through a change. The camouflage version of the unique fallschirmjager battle smock was only just being introduced, with the green 'splinter' pattern camos starting to make an appearance.  By 1942 the brown version had largely replaced the others although the plain one was used right up until the end of the war.  For my platoon I've only given camos to the sniper. 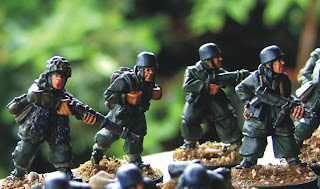 All the NCO's are armed with MP-40 LMGs (8 per platoon).  The platoon consists of 2 x 12-man sections and a command squad of four. 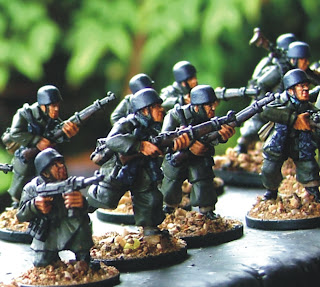 My favourites are without a doubt the LMG crew lying flat.  I've got them firing from behind some rocks, with his MG-34 propped on them - better than one team where the loader has it balanced on his shoulder - you can have that job! 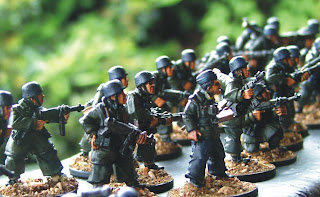 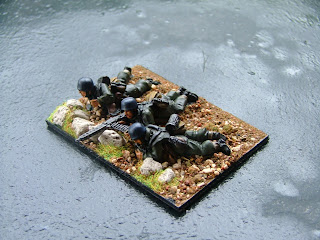 They're a great set and one I'll be adding to again soon with some support weapons and even an armoured car!  I'd love to fit a 1/48 tri-motor transporter model but I'll have to keep me eye out for that one - they're scarce as hen's teeth.  My next lot on the paint shelf are my French hussars, which I will be focusing on.  They're half-done and I feel guilty leaving them un-finished for so long.

Remember to double-click on the pics to see the enlargements  and feel free to leave comments on the blog if you like.

Email ThisBlogThis!Share to TwitterShare to FacebookShare to Pinterest
Labels: Doc