While I finish my uni paper off and then the dragoons, I decided to post some figures I did for my Thirty Years War Polish with German & Scottish mercenary Pike & Shotte.  You may note I've tarted up the blog a bit too - thought I'd give it a bit of a make-over with the new blogger design tools they've thoughfully provided.  Dunno if I like it as I changed the layout as well and it'll take a bit of getting use to.  I may tinker further till satisfied. 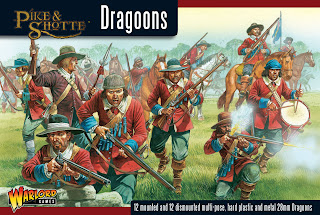 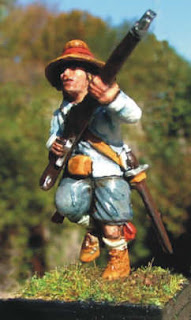 Herewith the Warlords Games figure that came with an issue of WI.  Not a bad figure and if I didn't have a full compliment of TYW shotte  I'd be tempted to invest in a box or two.  In fact the Warlord site has a few deals going - free postage for July and the new Dragoons set of 12 mounted + 12 foot for $UK30 - not bad.  Horses are plastic but riders and foot are metal.  If you're into the period its a quick way to build TYW or ECW armies.


While the figures don't have the elegance or finesse of Perrys (I also freely admit my bias here) they are quite OK and compare well enough to other ranges, particularly the Foundry figures of which form the bulk of my TYW armies. 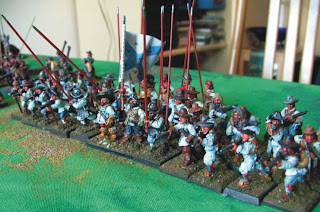 This lot are my 'Wiessfrocken' lads with a cross of St Andrews flag which would/could make 'em Scots mercs fielded with the (Catholic) German Imperialists.  As mentioned earlier, most are Foundry with a leavening of 'others' of indeterminate make - like the beardy men in hoodies nursing their muskets and a few of the lairy types in front with the feathery 'ats! 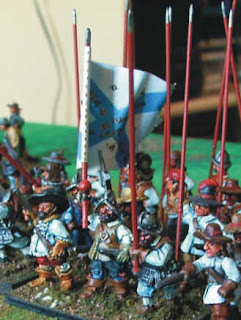 The regimental command includes a converted pikeman as ensign - definitely one of yer fearsome hairy Highland types rather than a downy-cheeked Bonnie Prince Charlie lad!

On 'tother side are more German/ & Scots mercs fighting as the infantry for a Polish army of the period and yes, that is a Prinny Rupert figure behind them doffing his hat! 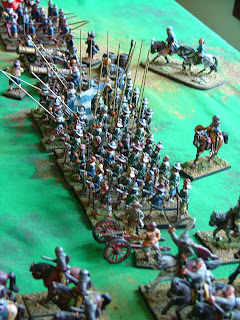 I take perverse pleasure in my dirty great Culverin battery with (naturlik) German gunners (& a master gunner no less in helmet that can also pass for an engineer) with a Polish officer in charge of  course.  The guns are Games Workshop and the figures Foundry, Old Glory(?) and other indeterminate makes again.  Note the Polish hetman and his cossack escort in the background - my Polish command stand. 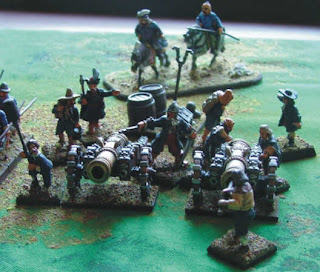 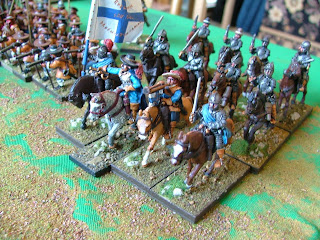 Had to work in some Perrys somewhere - here in the command for the cuirassier (the trumpeter and the two guys in the natty blue sashes) - the other figures are Foundry & Redoubt.  The standard is inscribed in Latin with "Semper in Excretum - Sed Sol Profundium Variant'  - or 'Always In the S*!# - Its Only The Depth That Varies'.

I admit I enjoy gaming with them almost as much as the Napoleonics - but haven't had the opportunity for a while.  I'm waiting for the expanded version of Black Powder which, I am told, will cover that period.  Now THAT will be fun to do.

As always, click on the pics to see the enlargement and feel free to leave comments or queries to which I will endeavor to reply.