Once I had the figure done I decided to finish the command stand for the 5th Hussars.  I made the third figure into a brigadier in full dress uniform, with shako.

I will do a separate stand of hussars in colpack for the elite squadron.  I had sliced his hand off and glued on the eagle standard until I realised that the 5th never carried their eagle with them on campaign (I believe only two hussar regiments disobeyed orders and did so).  So I had to then glue the slightly shortened hand with sword back on. Doh!  Thank goodness you don't really notice it (and no, that's not a signal for pedants to pick the fault out!) 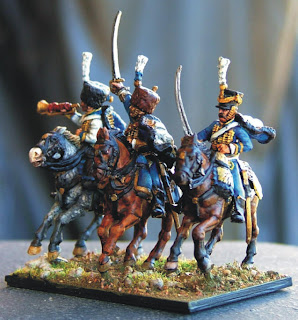 The only other obvious mistake with the command stand is the trumpeter's sabretache which is blue.  Although the regiment's were red, I have conflicting information that the trumpeter's were blue, so that's what I've gone with.  To be frank, there was so much unregulated differences in the uniform that its almost 'anything goes', particularly with officers and trumpeters who were more often dressed according to the commanding officer's whim (and the officer's purse - i.e. what they could afford). 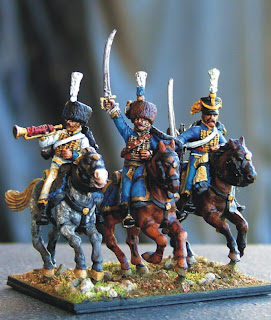 I'm quite pleased with the way these figures turned out and will look forward to doing the rest of the regiment once the uni essays are out of the way.  I deliberately didn't use any Army Painter tone, unstead relying on washes and experimenting with Rotring inks (the blue in the uniform and the brown horses) which give a really deep tone, easily dilute and generally handle as  well as any commercial paint wash. 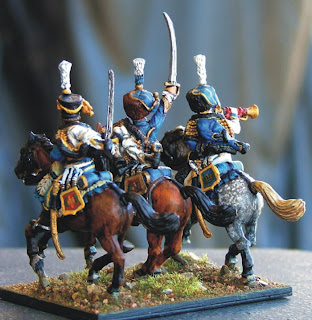 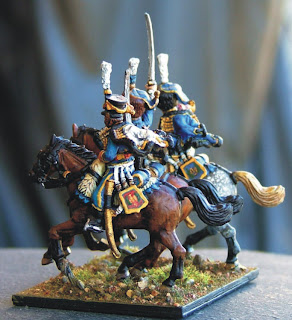 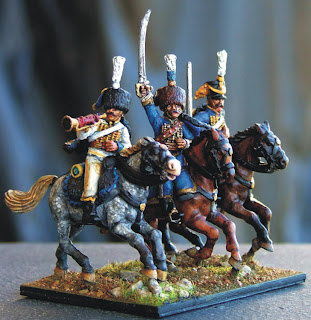 The base is one of the plastic ones included with the box with a magnetic strip cut to fit (adds a bit more weight as well).  I plan to do the rest of the regiment in campaign uniform, the only debate is how many I'll do as the 5th out of the two boxes as I want to have a couple spare for casualty figures.  I'm toying with the idea of having one with his leg trapped under his horse but it'll take quite a bit of slicing and dicing to convert.

Hope you enjoyed the photos, remember to click on them to get an enlargement.