Been hellishly busy on domestic chores (i.e. trying to get as many done as possible) before I return to work (part-time) at the end of the month, all of which means I am very late in posting anything on the blog which has had to take a back seat to all other activities.  Nonetheless I have managed to get in some good wargaming (should always time for that I reckon!) with a Bolt Action game set in Crete (Op MERCURE) which saw my Fallschirmjaeger take the vital Tavronitis iron bridge south of Maleme airfield from the tough Kiwis, RAF-types and their Cretan allies. Actually the poor old Cretan guerrillas didn't get involved as they rolled to come on, failed their morale and promptly ran off again.  The RAF ground crew actually performed heroically, doing a bayonet charge on my HMG and taking it out. But in the end the allies were virtually wiped out, helped also by two very successful airstrikes from my supporting JU87 Stuka.  Unfortunately I didn't get photos of the game which is a pity as Andrew had put together a very impressive iron bridge for us to fight over!
The other game played was a Black Powder Napoleonic one at our Lanyon club for our monthly get-together. This was a simple encounter game between three brigades of infantry, two of cavalry and three artillery batteries per side. I know in BP one artillery piece equals a battery but we think that looks pretty naff so we make up small batteries of up to three guns apiece - much more aesthetically pleasing on the tabletop!

I provided the figures and on the Austro-Russian side were six battalions (@ 32-36 figures each) in two brigades of Austrians including Jaeger, Grenzer and Grenadiers as well as Line - but no Landwehr as I couldn't get them all painted in time. Each had a battery of guns and the Grenz had battalion pop-guns.  They were accompanied by six battalions (@ 24 figures each) of Russians in one brigade - four line, one jaeger and one grenadier.  There was one Austrian (Chevau-Leger & Kuirassier) and one Russian (Uhlans & Cossacks) cavalry brigades.  The Russians were accompanied by a horse artillery battery.  On the French & Allied side were one French infantry brigade of four battalions (three Line, one Legere) with a 12 pdr battery, one Guard brigade of two battalions of Poles and three of Chasseurs d'Eble ('orrible Corsicans!) and one of two battalions of Italians (one of them cacciatores - light infantry) and three of Bavarians.  Both these brigades contained one small battalion each of sharpshooters - one of the Bavarians were rifle-armed jaeger.  The cavalry were four regiments divided into two brigades - Chasseurs, Dragoons and Horse Artillery in one and Bavarian Chev-Leger, Polish lancers in the other.  Perfect size for a quick game.

It was our first use of the BP rules for some time and after we sorted out a few things - mostly about applying national characteristics to our troops and what advantage/disadvantage that provided during gameplay - we got stuck in, and the game flowed quite smoothly.

First blood - quite a bit of it actually - went to Doug's Austrians who managed to destroy my 1st cavalry brigade.  The Austrian Chevau-Leger took out their perfectly matched counterparts the Line Chasseurs (with my newly painted command and elite squadrons!) in a short and sharp hand-to-hand. Cut 'em down to a man (and horse)! It was a reminder of just how bloody and final the BP rules can be.  I managed to get some shooting hits on his Kuirassier with my horse artillery which stopped them in their tracks but when I tried to charge my Dragoons at his Grenzers in skirmish, they came up short and ended up stranded in front of the Austrian line. Massed musketry and artillery fire destroyed the entire regiment of my beautiful dragoons in their first action!  [sob]
I advanced my first infantry brigade up the middle to tempt the Austrians out of the village, to save me having to assault them in hard cover.  The Austrians weren't falling for my bait - well, not straight away - and gave me several nasty blasts of long range fire.  I'm glad I was trying it with my (valiant) Poles and my elite Guard Chasseurs (also known as 'the Cousins' for obvious reasons) as I could absorb the hits and my brave Poles and the Corsican mafia took the punishment and got nice and close before returning fire!
The Austrians and Russians opposite were having none of it and Mark's Russian infantry and cavalry came on and immediately charged into my second cavalry brigade to the right of the Poles.  The Russian Lithuanian Uhlans destroyed my elite Bavarian Cheval-Legers in two rounds of combat but my Polish lancers fared better against Mark's cossack filth (as they bloody well should!) after we had worked out just how they could charge formed regular cavalry from the front, normally a very un-cossacky thing to do.  BTW - it can be done with successful brigade orders if they are not rated as militia cav and they are brigaded with regular cavalry.  Not that it did them any good in the end.  After a fierce struggle the Poles forced them back then used a continuing charge (victorious cavalry) to engage them a second time and destroy them.

While all this was going on Mark's victorious Uhlans did a right turn and tried to hit my advancing Poles in the flank.  Had they succeeded (just one more pip on Mark's command dice!) it would have been a massacre as my Poles were advancing in line.  In the nick of time my Italians came on to support the Pole's attack and quickly refused the flank, boxing in the Uhlans.  The massed fire of my Italians at close range put an end to the last of the Russian cavalry.

But it wasn't just the cav I had to contend with but two battalions of Russian infantry who had thrown themselves at the Poles. 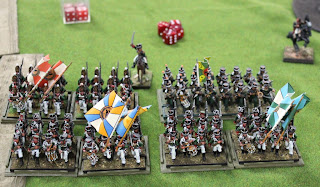 The infantry fight in the centre went on for three Turns without one side or the other forcing the other back. The Austrians in the village finally jumped the wall to add their support to the Russians, getting in some close order musketry to boot but the redoubtable Corsicans absorbed the casualties and fought on.

The final part of the game came with my forces on the left finally having some success with my horse artillery getting enough hits to force the Kuirassier off the field then the Legere brigade charging across the field to hit the Austrians opposite.  It was a similar move to that which saw the destruction of my Dragoons but fortunately my guest commander (Vern?) rolled his command well and got three moves to get them right into the Austrians lines and assault the Austrians who were still in field column!  Musketry and hand-to-hand saw the Grenzer and another Austrian battalion off the table which, together with the Russian battalions beaten (for the first time!) in combat and forced back, ended the game in favour of the French. Six turns (could have easily been eight if we hadn't spent some much time discussing rules etc, and setting up) - so perfect for a demo at the next con (Wintercon) in Canberra in a few months time.

Thanks to Doug and Mark for the game and Greg, Leigh and Mike (Satrap Miniatures ) for the photos of our game - all the decent ones I've posted are theirs as my new-fangled phone camera failed completely to do the job!  Mike's blog also has some great shots of the ripping Hail Caesar 28mm game they had at the meeting too.

Looking forward to more gaming goodness - including use of a JU52 transport I'm painting up for my German paras in the next Crete game.