As followers of this blog will know, I have somewhat of a fascination with French cavalry of both the first and second Empires (considering the number of posts, that maybe a bit of an understatement!)  Found some photos I'd taken of my Franco-Prussian War French cavalry that I'd forgotten about.  These and more (the cuirassiers I posted about earlier this year) are now ready for our big FPW demo game at the next Cancon gaming convention in 2013.  Just finished off the last two battalions of line infantry (and one of Algerians) and now with my wargaming scenario partner Doug, we should have enough figures to stage pretty much a full corps scale action (Froschwiller - see also some of my earlier posts on our test games). 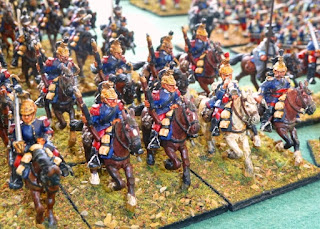 French Dragoons - from the marvelous Foundry FPW range with a particularly wonderful officer figure - very hard to get! 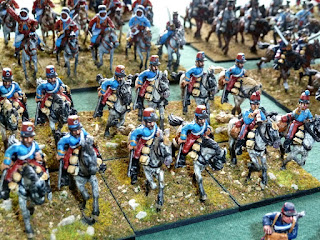 The famous Chasseurs D'Afrique - arguably the most effective French cavalry of the war.  These figures have the taller shako-style parade cap worn at the start of the conflict - which they soon swapped for the soft kepi on campaign. Note the Spahi Algerian native cavalry behind them - they were the most effective French cavalry in the second  or Republican phase of the war. 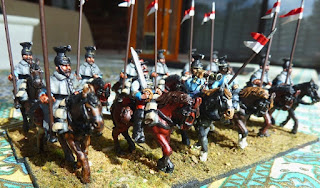 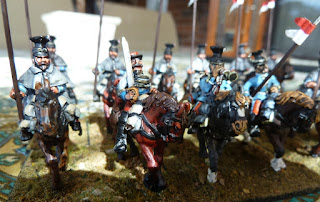 French Guard Lancers in mantle with command in full uniform (the officer in the white 'parade' jacket) - again, some of the simpler but nicest of the Foundry figures in the range.

One of the things that came up with our test games was the number of casualties suffered by many of the units engaged and how to record these with markers during the game - we ran out of figure markers constantly and had no cavalry markers at all.  To help solve that little problem I found a really good use for my old plastic 20mm and some old broken Minifigs horses. 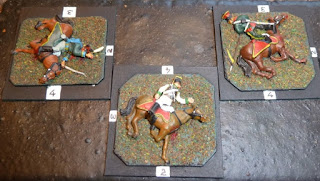 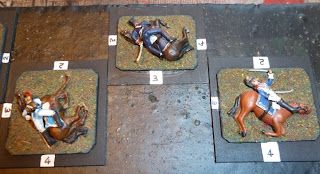 The French version -  a Carabinier, lancer and cuirassier - hors d'combat! 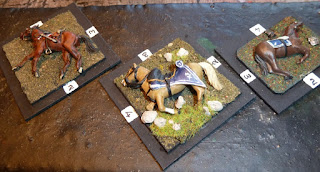 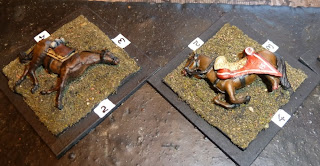 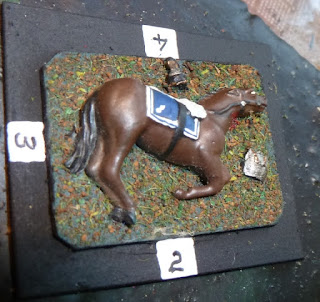 A dead cuirassier horse - being French they'll probably use the breastplate to cook a bit of him up after the battle! 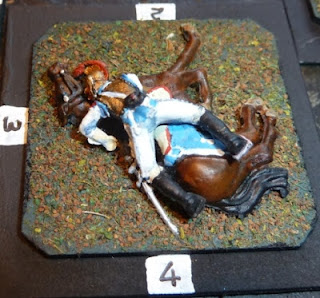 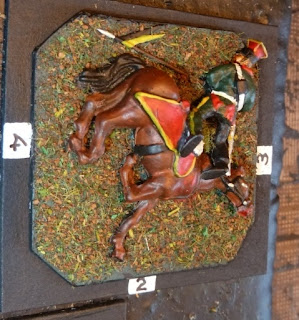 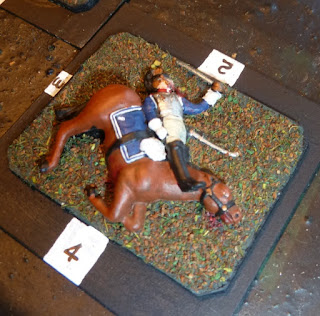 I was loath to use good 28mm horses as casualty markers - too expensive and fiddly to alter - then I found the old plastics when selling my 20mm collection. I know they are 1st Empire Napoleonics but  they actually fit in and look better on the table than other markers.  I've  mounted the horses (excuse the pun) on two overlapping card bases, the idea being that one casualty marker can represent up to four casualties per unit.  I've used exactly the same method on the casualty figures for the French and Prussian infantry. You can never have enough casualty figure markers in large Black Powder games!