Back from my little break down the coast where (much to my wife's disgust) I took the last of my French line down with my little painting 'traveling kit'.  I think it ground her gears simply because she was the one who suggested the 'traveling kit' - even supplying an old metal cosmetics case for the purpose.  Perhaps she thought I wouldn't take her seriously (one should ALWAYS take one's Minister of War and Finance seriously!)  LOL - I thought it was a great idea and it worked perfectly! 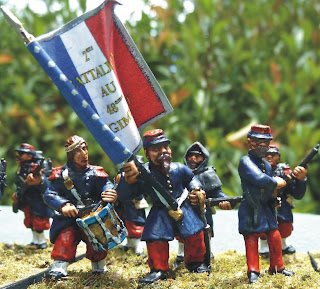 All the figures for the 48th are Castaways save for the drummer (Kitney&Co - with a different head) and the bearer, a Foundry figure.
The flag is my own creation.

In the early hours after my walk along the beach I'd relaxed with a cup of tea and a paintbrush - finishing the 2nd Battalion of the 48th Regiment and a mounted Brigadier.  All I had to do when I got home was a few touch-ups and the basing. 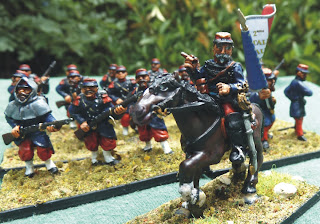 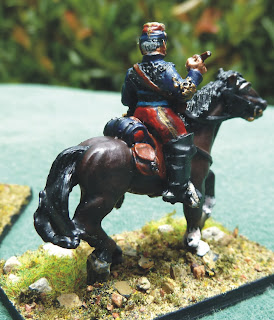 Mon General from ze back!  The lace on the sleaves was gold to denote rank whereas the rest was commonly black.
While doing the basing for the 48th also made up my French cavalry commander and his Guard Lancer escort (good use for an extra figure too) - again Foundry figures from their wonderful FPW range. 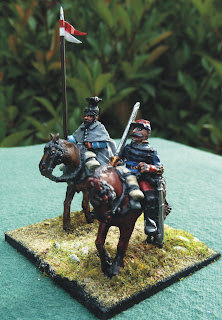 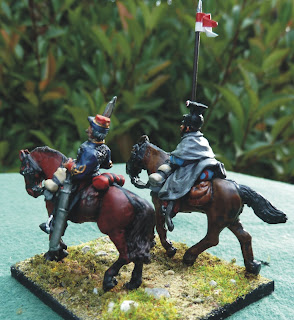 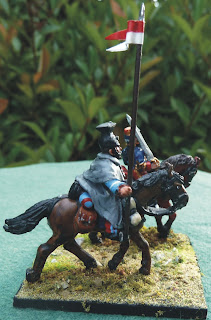 The 48th and the 36th (three battions of each) made up the Line brigades of the 3rd Division, along with the 2nd Zouaves and the 2nd Tirailleurs Algeriens (Turkos) - uniform-wise, a very colourful division. 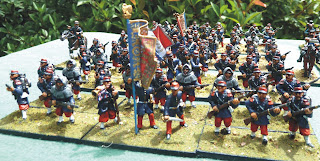 Just doing a few prone markers (lying down shooting figures) and that'll be it for now.  Still some 60 odd foot to paint if I've a mind too but that'll do for the time being, besides which my mate Doug has found me a brigades-worth of Wurttemburgers that'll need doing. 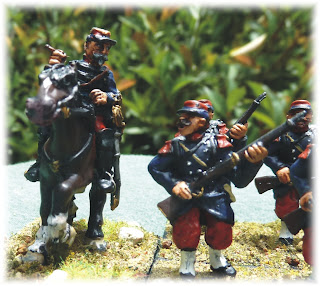 Oui Mon General - zat ees a truckload of painting!
The price for that and a regiment of Pomeranian hussars will be painting up another brigade for him - more Turkos!  Between us we'll be able to field pretty much all of MacMahon's 1st Corps - at least that's the plan - so we can do a Black Powder demo of Spicheren or Froschwiller at the next con. 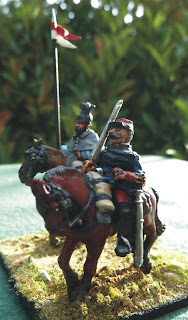 A full Corp of figures - tell 'im e's dreamin' Pierre!
Well, that's about it for now.  Might photo the full French army and post it but now I must away to finish required domestic chores from a very, very long list thoughtfully provided by the Minister (She Who Must Be Obeyed) who will expecte them done by the time she gets home.  Discovery of extra blogging being commited without said tasks completed may result in a summary execution.

Cheers,
Doc (the foolhardy)
Posted by Doc Smith at 3:17 PM