Some more LOTR - its troll hammer-time!

I realised with my last post that I may have mentioned 'humungous troll' quite a few times and claimed he was worth at least three normal figures.  Actually, considering you have to build him, bog him (and no, its not troll toilet training!) before painting - he's taken more time than three normal figures.  In fact I spent as much time on him as at least a dozen LOTR 28mm figures.

While I am not into fantasy figures that much I must admit they can be great to paint.  I had to mix my own troll blue flesh colour and used a number of washes, then blended it into the off-white flesh.  The eyes too are a nice glowing cat's yellow - I paused the first movie quite a few times to get a good look at the troll's eyes so I could get it right!

To prove the point, here is Mr. Troll.  A few pics of him being mercilessly teased by some nasty Minis Tirith tin-plated bullies, poor old troll. 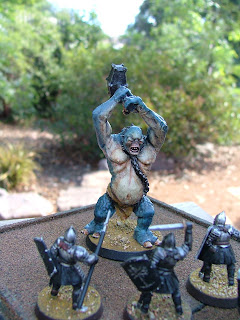 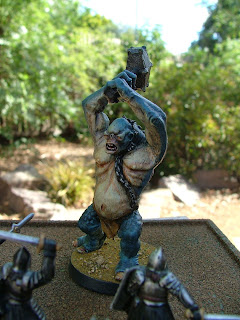 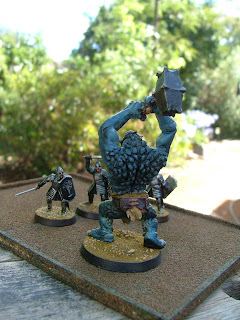 A 'bullies-eye' view or  "methinks we have soiled our chainmail!"

Sorry, no Rohan either - perhaps another time.

Email ThisBlogThis!Share to TwitterShare to FacebookShare to Pinterest
Labels: LOTR