Some of my other favourites are the Russians - in particular the Cuirassier.  These are like the Austrian Uhlans, some of Kennington's best IMO, although I bought a box of Zvezda Cuirassiers (after being impressed with the Guard Cossacks) and the plastics will give the metals a run for the money particularly in terms of variety and animation. 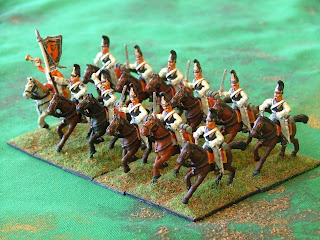 I particularly liked the command figures and after getting the required standard from Napflags, made up one with some painted cotton knotted and trimmed for the cords. 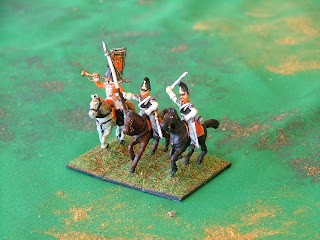 Again, I chose some Newlines figures for the Russian cav - this time hussars. 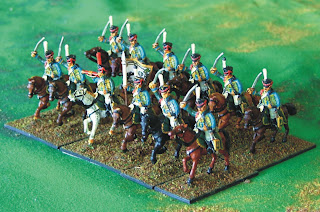 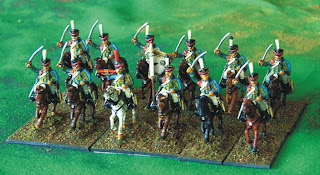 The Russian cavalry wouldn't be complete without Cossacks - here I have HAT figures - usually fairly pedestrian figures quality-wise but I think this is one of their best Napoleonic sets. 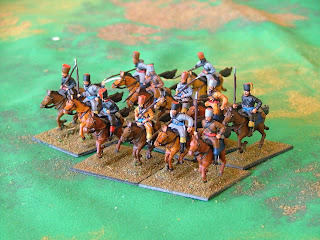 Other plastics that impressed me are the Zvezda Russian artillery - which I have yet to obtain - a superb set and 28mm plastics manufacturer's (and precision die tool makers) take note - this is how you put an artillery set on a sprue!  But there are other sets which are also impressive which I have managed to collect such as Revell's Pavlov Grenadiers.  The box gives you more of the big mitre-hat grenadiers than you would ever need BUT the SYW/Revolution era conversion possibilities are endless with pike wielding NCOs, be-wigged officers waving swagger-sticks nad a nice pair of musicians - drummer and flautist.  If you've a Russian army - ya gotta have Pavlovs! 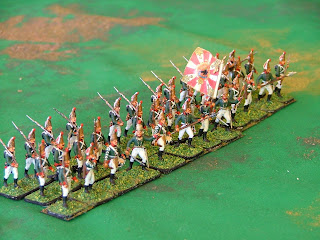 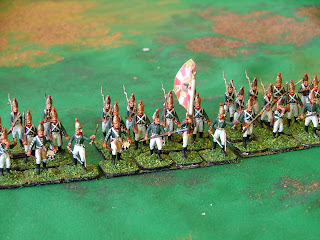 That's the 'worthy' portions of my humble Russian horde.  Typical with 20mm plastics - there are literally thousands to paint - but I doubt I'll ever get around to it any time soon.  Next post - the French!