Fishing around in my study looking for something I came across some old disks that contained some military images I collected.  Curiosity peaked, I had to find out was was on them - lo and behold!  I found the scans for all or most of my old magazine cover artwork.

You see boys and girls, once upon a time in years gone by (ten years gone by to be precise!) I edited and published a wargaming magazine.  Myself and my mate Doug thought it a good idea and we put a huge amount of our time, energy and money into making it happen.  And for about 12 months (and six issues in glorious colour covers) it worked.  Sort of. 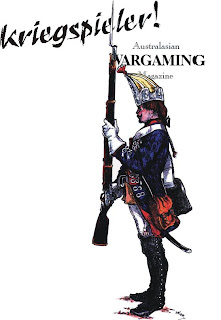 This chap was a Hessian grenadier from the American War for Independence. The intention was to draw a different one for each of our bi-monthly covers.  That was the intention - the reality soon settled in that we were flat-strap getting the articles written and chasing those to be submitted, the getting the layout right, doing the graphics and the ads and then the whole shebang to the printers.  Stupidly I provided a free advertising design service that included artwork etc which chewed up a lot more time and for which the mag didn't get a brass farthing in payment for - not the best of business practices!

Time to draw soon became a luxury.  You can well imagine how many figures got painted or wargames played.  Not a lot.

Some of the artwork never made it to the colour stage and there were one or two for our old black & white issues (there were six of them) that probably shouldn't have been! The French Guard Eclairer was one of the better ones published in glorious B&W. 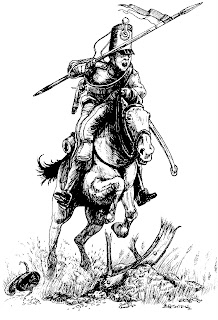 The magazines are still on the redoubtable Russ Lockwood's 'Magweb' site if anyone is interested.

Well, there you have it - some of Doc's 'art'.  Hopefully I will have the time to pick up the pen and draw again one day - until then I'll just continue to paint a few more soldiers!